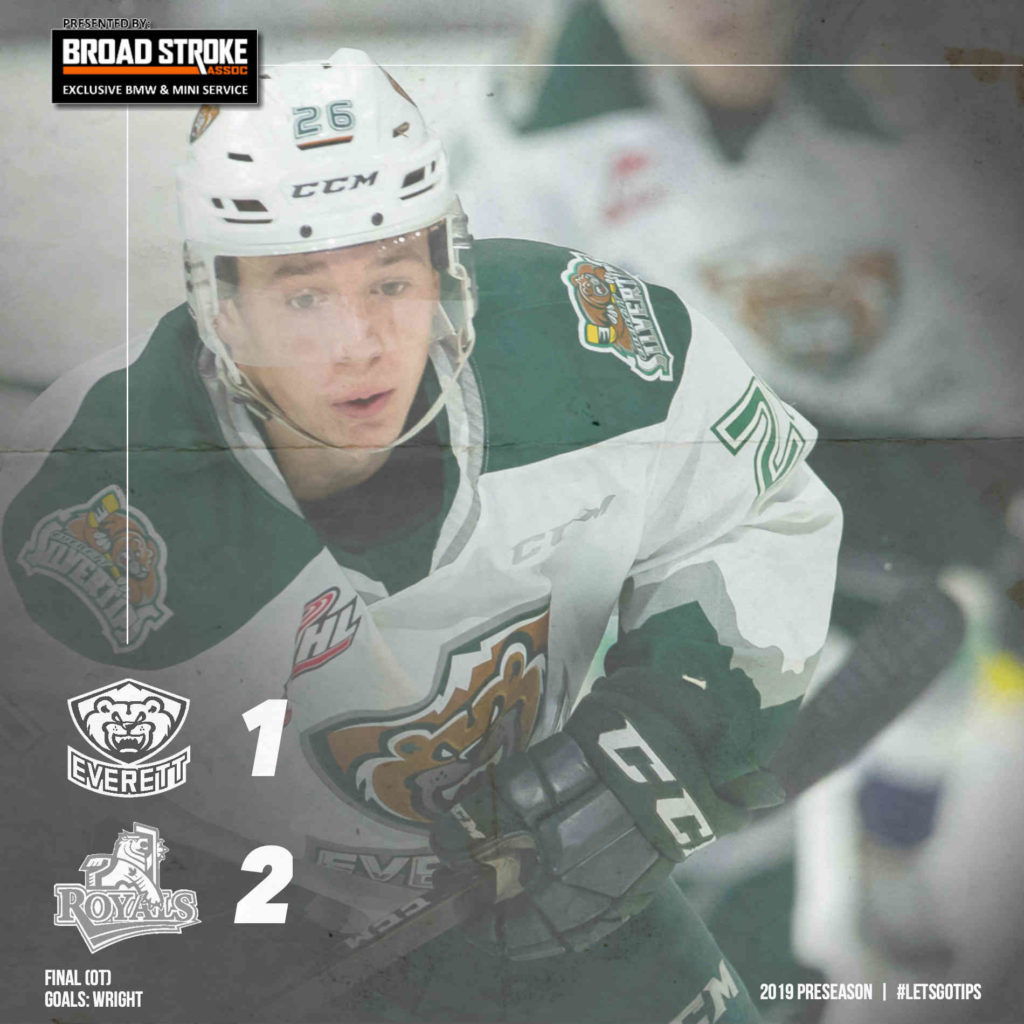 LANGLEY, British Columbia – Nolan Jones’ first goal of the preseason at 4:51 spoiled an attempt at a five game winning streak, and the Everett Silvertips (4-0-1-0, pre-season) settled for a 2-1 overtime loss to the Victoria Royals on Sunday in the Vancouver Giants pre-season tournament at Langley Events Centre.

Jacob Wright deposited the lone Silvertips goal of the afternoon while Braden Holt, making his second pre-season appearance in net, turned in a 19-save effort while the Silvertips missed five players out of the lineup who suited up last weekend, committed to NHL training camps.

After a scoreless tie and a seven-save output by Holt in the first period, the Silvertips got on the board with 8:14 left in the second on Wright’s first goal of the pre-season, set up by Gage Goncalves and Olen Zellweger. With the puck stationed at the left point with Zellweger, he threw a cross-ice dart, tape-to-tape for Goncalves. The second year Tips forward then relayed, circle-to-circle to a wide open Wright, who tucked in the game’s first goal from the left circle.

River Fahey’s third pre-season goal knotted the score, 1-1 off the rush with 6:14 left in regulation when drove the net toward the right post and finished off a backdoor feed from Trentyn Crane. The goal ended a shutout streak by Holt of 67:21, dating back to the third period on Sept. 1 against the Seattle Thunderbirds.

With the Tips dumping the first five shots on net in overtime, Reece Vitelli nearly ended the game with less than a minute left when he drove the net from the left wing off a partial break, but lost the puck in an attempt to deke over to the glove side. Jones then finished the game at the 4:51 mark of overtime. After Holt came up with a big save on Graeme Bryks off the rush, Jones stayed with the rebound to deposit it under the crossbar.

Holt’s counterpart to start the game, Shane Farkas, made eight saves in the first 30 minutes before being replaced by back-up Brock Gould (19 saves).

The Silvertips finish the pre-season on Tuesday in Kent, Wash., a 7:05 p.m. game against the Seattle Thunderbirds (audio coverage: everettsilvertips.com / Mixlr) at accesso ShoWare Center.

NOTES: Scratched from the lineup were Martin Fasko-Rudas, Brendan Lee, Jackson Berezowski, Bryce Kindopp, Jake Christiansen, Gianni Fairbrother, Wyatte Wylie, Dustin Wolf and Michal Gut … the Tips outshot Victoria, 28-21 … Dawson Butt led the Silvertips with five shots on goal … Gage Goncalves turned in a 50% outing (7/14) at the face-off circle … through five games in net, Wolf, Holt, and Keegan Karki have combined for a 1.74 goals-against-average and .927 save percentage in the pre-season.

The Silvertips officially launch the 2019-20 season with Opening Night, presented by Lamoureux Real Estate and SoundTransit (magnetic schedule giveaway) on Sept. 20 vs. Tri-City at 7:35 p.m. and finish the weekend the following night against the Royals, 7:05 p.m. with both games set for Angel of the Winds Arena in downtown Everett.