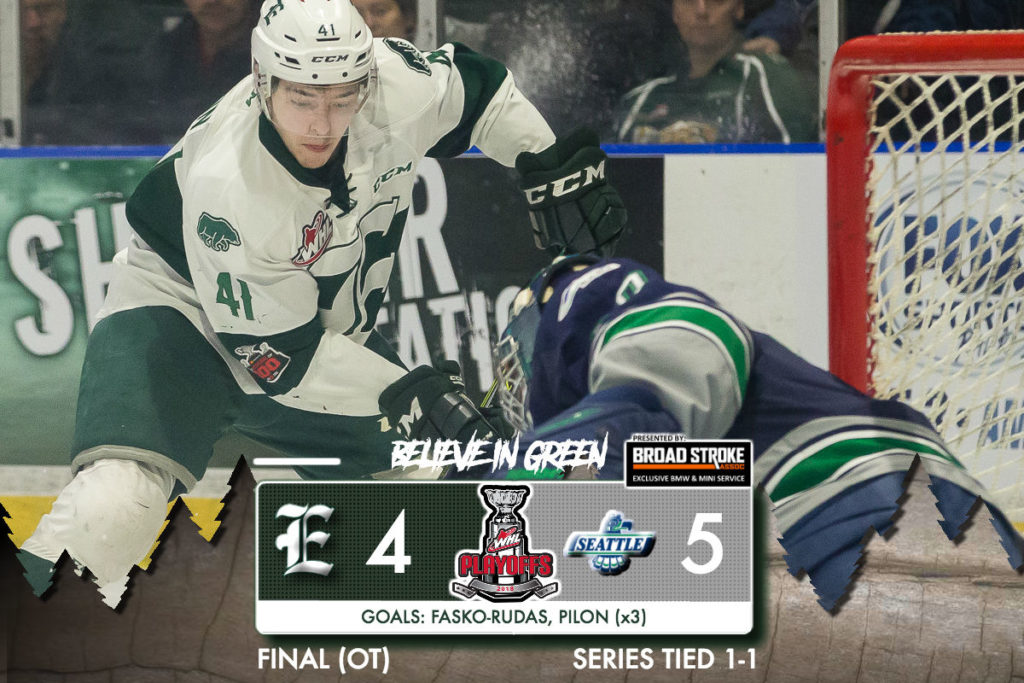 EVERETT, Wash. – After an astounding hat trick by Garrett Pilon to rally back with under a minute left in regulation, Zack Andrusiak’s winner at 5:04 helped the Seattle Thunderbirds sneak by the Everett Silvertips, 5-4 in sudden death overtime before 5,694 fans at Angels of the Winds Arena on Saturday night. The best-of-seven series is tied, 1-1.

Pilon’s hat trick was the first in postseason for the Tips since Carson Stadnyk accomplished his against Spokane, Mar. 27, 2015 against the Spokane Chiefs. Martin Fakso-Rudas got the other Tips goal while three separate Tips registered multi point games.

The Silvertips will battle the Thunderbirds for game three in Kent on Tuesday, March 27 at 7:05 PM PT (Fox Sports 1380 / WHL Live). Tickets for Game 5 of the first round, Saturday, Mar. 31 in downtown Everett, are on sale now by clicking this link.

The Tips came out fast and hard against the Thunderbirds in the first as a deflection by Martin Fasko-Rudas got them on the board at 2:17 thanks to a great set up by Gianni Fairbrother and Reece Vitelli to make it 1-0 Tips. The Tips dominated the first 3 minutes as they were outshooting the T-Birds 7-0. Wind was taken out of their sails as Pilon took a crosschecking penalty at 3:48 and Seattle got on the board at 4:15 on a one-timer from Austin Strand. Seattle took their first lead of the series with a goal from Sami Moilanen at 6:33. There was some controversy as Gianni Fairbrother blistered a puck what seemed to be into the Thunderbirds’ net to tie the game but it was concluded to be a no goal as the puck did not completely cross the line and the score remained 2-1 T-Birds. There was a flurry of shots in the first period as Everett had 18 and Seattle had 14. Seattle took a penalty in the last 1:30 of the period which carried over to the second period.

The Tips got the game tied up rather quickly in the second as at the 33 second mark, Pilon got his second goal of the playoffs on a five-on-three goal with a post-to-post set up to make the score 2-2. Seattle’s captain, Turner Ottenbreit, helped the T-Birds regain the lead at the 13:23 mark to make it 3-2 on a power play goal from the blue line. The Silvertips were able to re-tie the game minutes later with another goal by Garrett Pilon with great effort by Vitelli with his second assist of the night and Connor Dewar at 17:11 to make the score 3-3. At the 18 minute mark, Riley Sutter went knee-on-knee with contact on Jake Lee, who had to be helped off the ice; Sutter received a five minute major and a game misconduct. Everett had 11 shots in the second versus Seattle’s 9.

The Tips were able to kill the 5 minute major to start the third, which was a big momentum booster for the team. The celebration did not last long though as Seattle regained the lead 7:35 with an unassisted goal by Mike MacLean, capitalizing on loose coverage between the circles. With 1:30 left in the game, Carter Hart was pulled for the sixth attacker for one last push to tie. In amazing playoff hockey theatrics, Garrett Pilon shoved the puck from up close past Liam Hughes with 53.6 seconds left in the third for the game tying hat trick. The Tips forced overtime. Everett had 18 shots in the third versus Seattle’s 9.

Overtime did not go as hoped for the Silvertips, and after a few minutes of some back and forth play, Andrusiak got his second of the playoffs as he got behind the Silvertips defense and stashed a backhander off the rush at 5:04.