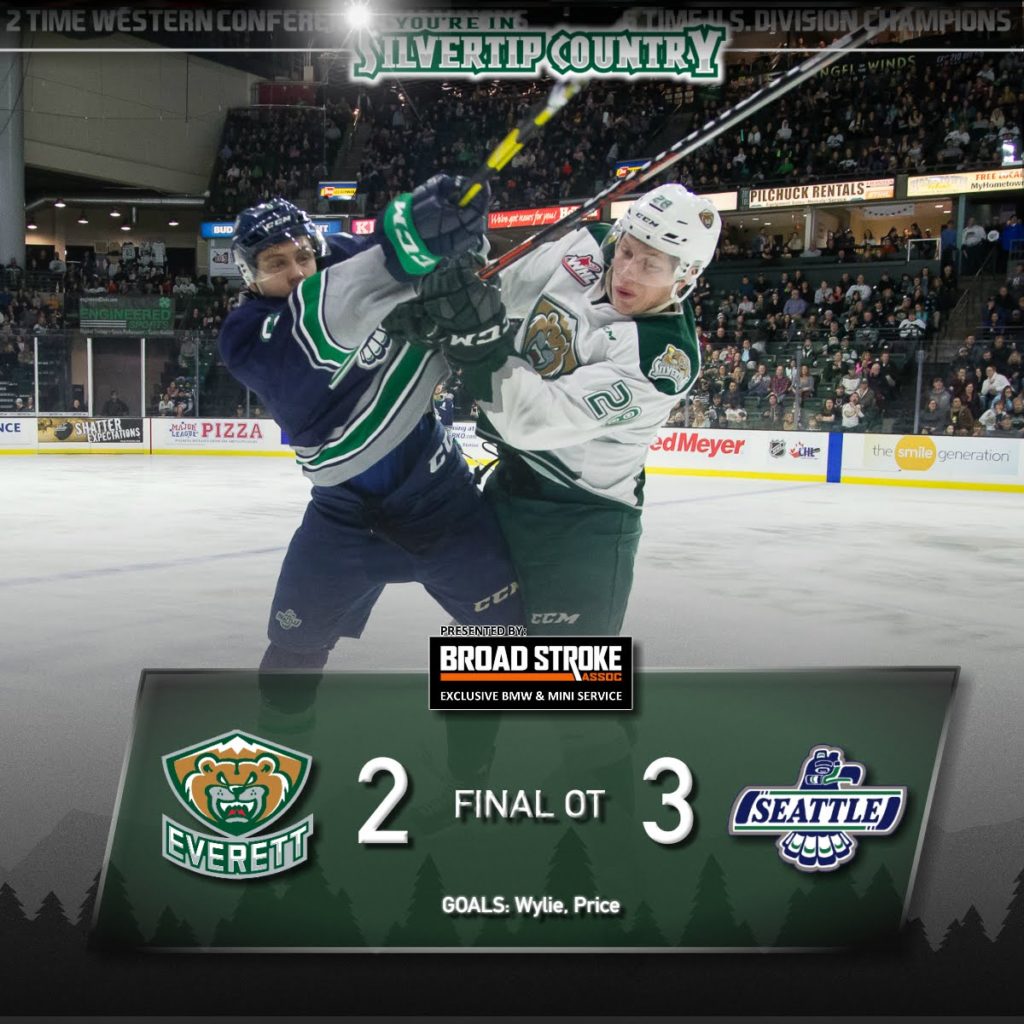 EVERETT, Wash. –Jarret Tyszka scored the winner at 2:24 to help the Seattle Thunderbirds sneak past the Everett Silvertips, 3-2 in overtime, before a sellout crowd of 8,367 at A.O.T.W. Arena in U.S. Division action on Saturday.

The Silvertips captured a point to remain atop of the Western Conference with 86 points on the season, having already clinched a playoff spot and reducing their magic number to 11 points after Tri-City defeated Portland, 4-2. Everett goaltender Dustin Wolf finished with 27 saves and third star honors while defenseman Wyatte Wylie and forward Jalen Price potted the two goals for the Silvertips.

UP NEXT: The Tips are back in action tomorrow night, Feb. 23, for a 7:05 p.m. tilt versus the Price George Cougars. (1380 AM / 95.3 FM / TuneIn App / WHL Live). A large crowd is expected in attendance and tickets are available at www.everettsilvertips.com/tickets.

Everett defenseman and Flyers prospect Wyatte Wylie put the Tips up 1-0 at 16:49 in the first with a wrist shot wired from the right slot to beat Seattle goaltender Roddy Ross glove side. Everett forward Reece Vitelli drove the puck into the offensive zone and fed forward Zack Andrusiak on the far side, who then made a tape-to-tape pass to Wylie, who stepped up in the slot and scored his ninth goal on the season.

Thunderbirds forward Nolan Volcan evened the score, 1-1, at 4:36 in the second period. Tyszka dropped a pass to Volcan who connected a slap shot top shelf blocker side of Wolf.

Price regained a Tips lead, 2-1, at 6:46 on an aggressive forecheck play to strip the puck from T-birds winger Brecon Wood and finish with a sharp-angled shot over the should of Ross.

Everett held the edge on shots after 40 minutes, 25-22, as the Everett penalty kill unit when five-for-five in the second period.

Seattle tied the game, 2-2, at 11:25 in the third after T-birds center Matthew Wedman picked up a loose puck in the neutral zone, fed Philp into the zone, who dropped the puck to center Andrej Kukuca in the slot, who finished with a wrister to send the game to overtime.

The Thunderbirds landed three shots on Wolf during overtime, one of which being from Tyszka who found the back of the net at 2:24. Everett landed one shot on Ross during the extra period.

NOTES: Silvertips scratches included Dawson Butt, Riley Sutter and Conrad Mitchell … The Tips entered the week ranked #7 in the CHL Top-10 rankings … Everett has won or gained points in 34 of the past 43 games … The Tips are 20-8-1-1 against opponents from the U.S. Division … Everett has clinched a playoff berth for 16 consecutive seasons (longest active streak in the WHL) … Zack Andrusiak earned his sixth point against his former team in the head-to-head series.