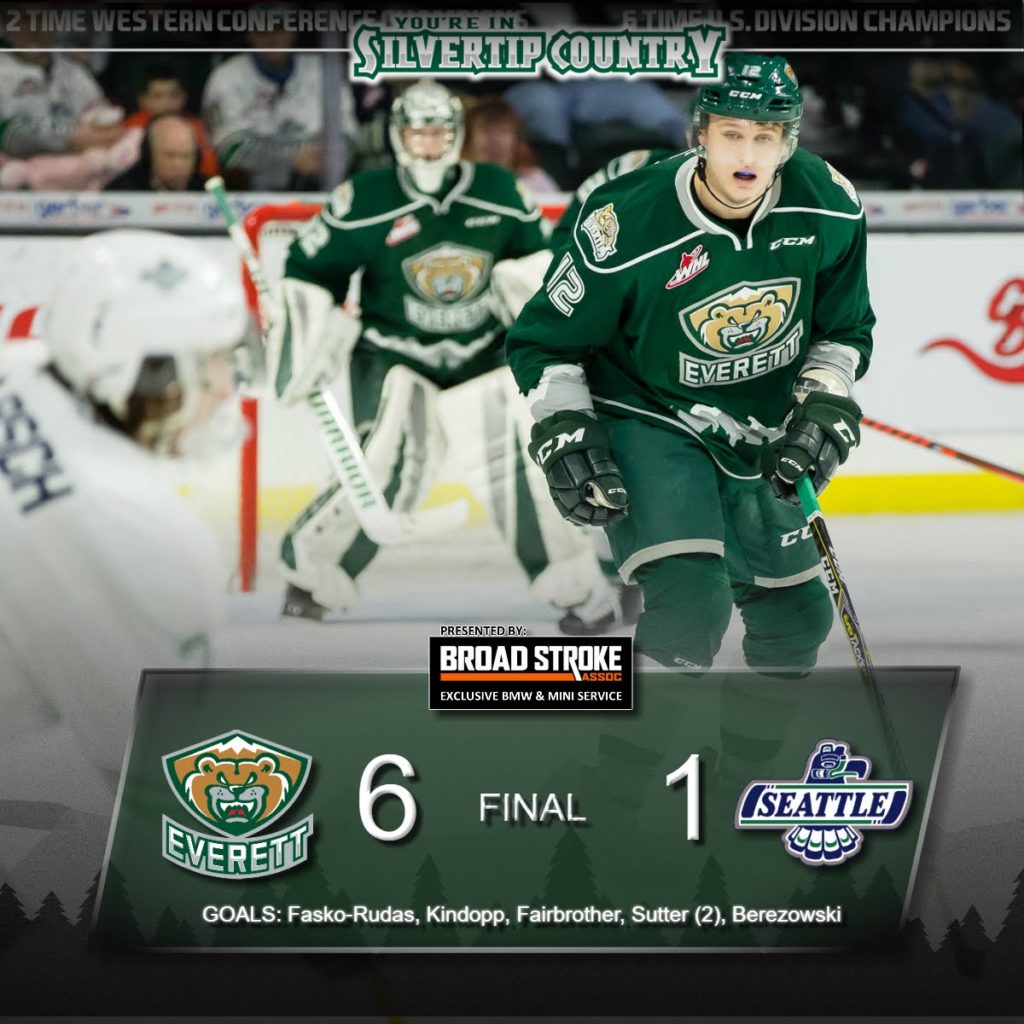 EVERETT, Wash. – Martin Fasko-Rudas made the teddy bears rain down tonight early in the first period and the Everett Silvertips coasted to an impressive 6-1 blowout win over the Seattle Thunderbirds before 8,133 fans at Angel of the Winds Arena on Saturday night in WHL action.

Tips fans donated 9,719 stuffed animals and bumped the total to nearly 35,000 to local kids across Snohomish County over the last four seasons since the event’s return to downtown Everett.

The Silvertips, earning their 11th win in 12 games, had 11 different players on the scoresheet and a strong defensive game kept the Thunderbirds with minimal shots and minimal goals. The Tips ran their point streak to 14 games, at 12-0-2.

The first period was all Silvertips as the peppered the Thunderbirds with shots consistently, looking for that elusive teddy bear toss goal. Martin Fasko-Rudas broke the scoreless tie and the fans threw their teddy bears in excitement as the Tips gained their 1-0 lead as he banked a shot off Cole Schwebius from the right goal line.

After the teddy bear clean-up, the Silvertips continued to roll as Bryce Kindopp netted his 17th goal of the season on a tip at the net, set up by Connor Dewar and Sahvan Khaira to make it 2-0.

Gianni Fairbrother was credited with his 4th of the year with some help from Reece Vitelli and Conrad Mitchell to make it 3-0 Tips when he fired a wrister between the circles at 15:03.

Just 1:17 later, the Tips got their 4th goal of the period with a slapper by Riley Sutter, set up by Martin Fasko-Rudas and Max Patterson. A line brawl resulted in 52 minutes of penalties between the two teams at 17:22.

The second period was a bit more disciplined as the first, but it remained the Everett show. The Tips held the T-Birds to 5 shots the entire period and those 5 shots occurred in the first 5 minutes of the period.

Jackson Berezowski got his 6th goal of the season with help from Sahvan Khaira, a long lob pass to the right wing followed by a snap shot, to make it 5-0 Tips with 48 seconds left in the period.

The T-Birds got on the scoresheet in the third period with a goal from Jaxan Kaluski at 4:15.  Riley Sutter netted his 2nd of the game with a sweet backhand move on a bad angle to make it 6-1 Tips, thanks to a nice pass by Ian Walker at 12:48.

Dustin Wolf made 21 out of 22 saves to wrap up his 25th win of the season.
THREE STARS

31 / PALAGA
NOTES: Silvertips scratches included Akash Bains, Sean Richards and Bronson Sharp… the Tips were perfect on the penalty kill at 6-of-6 … Everett are 4-0-0-0 against Seattle this season with 6 more meetings to go … the two teams won’t meet again until Feb. 1 … the Tips scored the teddy bear toss goal in the first period, for the third time in four seasons … they improved to 3-1-0-0 in the event since it returned in 2015-16.