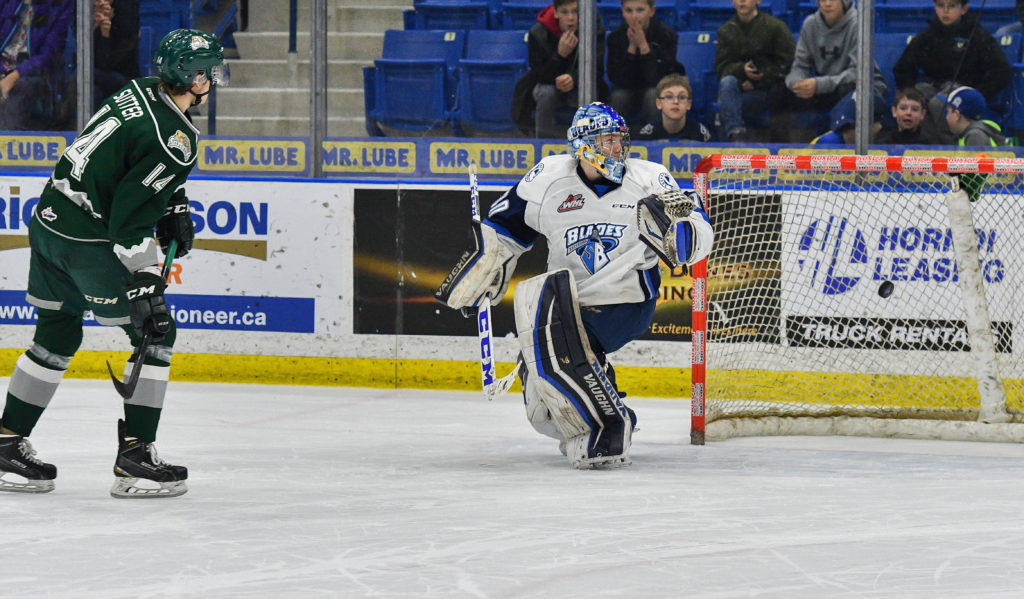 REGINA, Saskatchewan – Carter Hart turned in a 30 save effort and Riley Sutter’s goal in the fourth round lifted the Silvertips to a 2-1 shootout victory over the Saskatoon Blades, before 2,935 fans at SaskTel Centre on Wednesday in WHL action.

Winners in four of the last five games, the Silvertips seized first place in the U.S. Division and are 3-1-0-0 on their six game East Division road trip. Dominic Zwerger had a second period goal and Noah Juulsen, logging an assist, has five points in the last four games.

Saskatoon opened the scoring on 15-year old Kirby Dach’s third goal in seven games, a deflection off Bryton Sayers’ blueline bid at 10:50 of the opening period, but the Silvertips swung momentum gradually in their favor and tied the game late in the second period.

On an outnumbered attack, Zwerger entered the zone with speed at the right wing, and stopped at the base of the circle to open the pads of goaltender Brock Hamm. Zwerger scored low for his team leading 23rd goal at 14:04, and the game was tied at 1-1 through the end of regulation.

The Silvertips outshot Saskatoon, 4-2 in the overtime period and yielded a shootout opening goal to Jesse Shynkaruk, but Orrin Centazzo answered in the second round while Carter Hart stopped the final three shooters, including a fourth round save on Josh Paterson.

Sutter slammed the winner off Hamm, a snap shot from the left circle, sending the Tips to celebrate on the ice for their fifth win in a row over Saskatoon.

Hamm, who lost 2-1 in overtime last season to the Tips in Everett, took the shootout loss with a 28 save effort.

NOTES: Silvertips scratches included Ian Walker, Montana Onyebuchi, and Cal Babych … the Silvertips improved to 20-4-3 against teams outside the U.S. Division this season … against a Saskatoon club that had scored 13 power play goals in the last 12 games, the Silvertips killed off their only shorthanded situation in the first period … Silvertips alumni attending the game included Carson Stadnyk, Jeff Harvey, and Kohl Bauml.