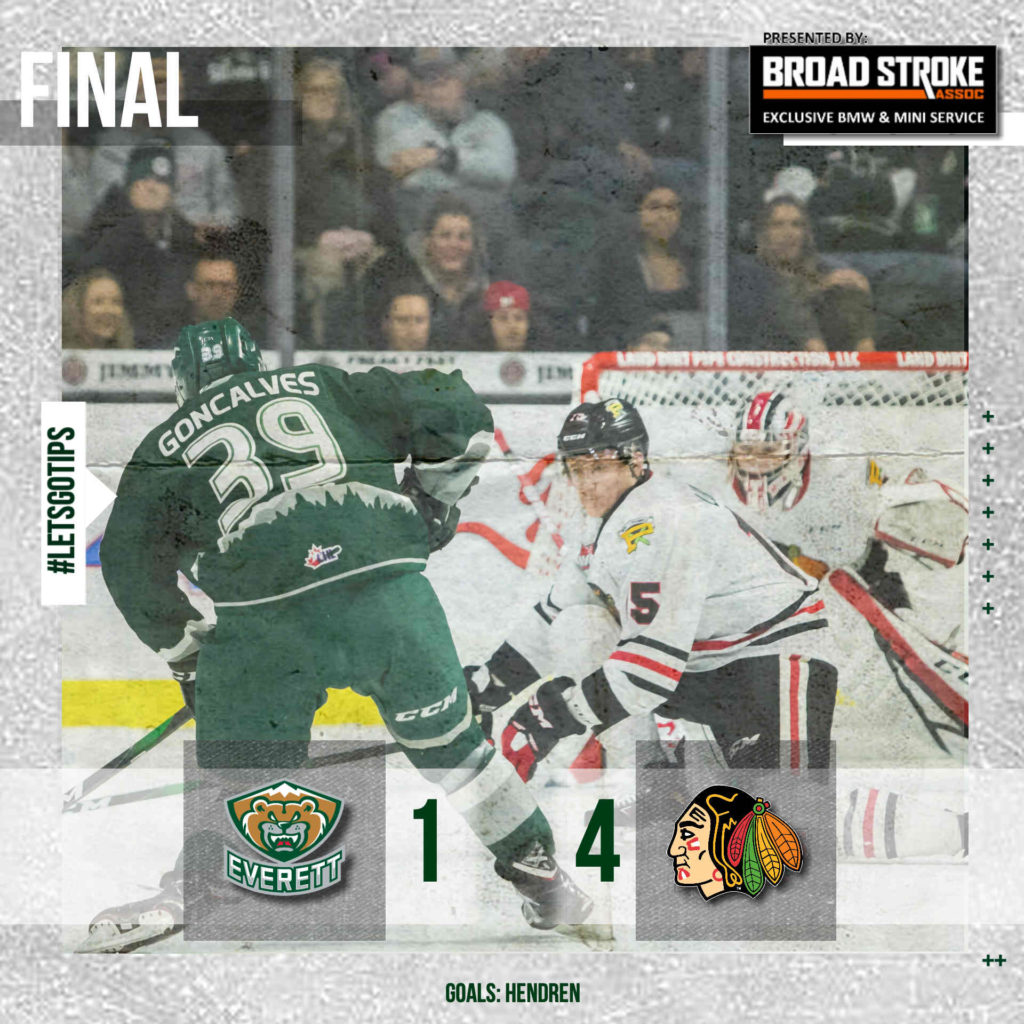 EVERETT, Wash.  – Seth Jarvis had a goal and an assist while Joel Hofer made 28 saves to help boost the Portland Winterhawks over the Everett Silvertips, 4-1 before 4,314 fans in downtown Everett on Friday in WHL action.

The Tips got their only goal in the second period by Parker Hendren and saw their five game winning streak snapped, following an 8-1 record in October. Portland scored twice on the power play and the first three goals of the game.

UP NEXT: The Tips finish a brief two-game homestand tomorrow night at 7:05 p.m. against the Kamloops Blazers (KRKO / WHL Live) at Angel of the Winds Arena. Tickets remain on sale, including the Chick-fil-A Fan 4 Pack, offering 4 tickets and sandwiches for as low as $56. Rally towels (limited available) will be presented to fans at the doors, presented by Erickson Furniture.

Portland staked a 2-0 lead in the first period, starting with Seth Jarvis’ power play goal on the front end of a Martin Fasko-Rudas double minor for high sticking. Jarvis scooted down the right wing, drove the net, and parked his seventh goal of the season under the crossbar at 4:16.

Mason Mannek then capitalized off a Silvertips turnover and buried a shorthanded goal at 19:34 for a 2-0 lead, one which the Silvertips nearly sliced in half at the first period horn. Bryce Kindopp buried a rebound off Wyatte Wylie’s point shot, as time expired. Though the officials signaled a goal, the video review led to an overturn of the call, and the Tips were down by two goals after 20 minutes.

Lane Gilliss tucked a rebound at the net for a power play goal at 4:41 of the second period to put Portland up 3-0, but the Silvertips responded on Parker Hendren’s first as an Everett defenseman. From a face-off win, Hendren fed Gianni Fairbrother for a one-timer. Hofer’s save produced a scramble at the goal mouth that evaded Jackson Berezowski and Max Patterson, but Hendren blasted the loose puck past Hofer at 7:52.

Dustin Wolf took the loss with 22 saves, relieved by Keegan Karki with 8:16 to go in the game (4 saves).

NOTES: Scratched from the lineup were Braden Holt, Olen Zellweger (World U17 Hockey Challenge), Cole Fonstad, and Jacob Wright … the Tips previously had a three-game home win streak against Portland … the Tips earned the edge in face-offs, 39-35 … Karki made his first appearance in net since an Oct. 16 win vs. Brandon.