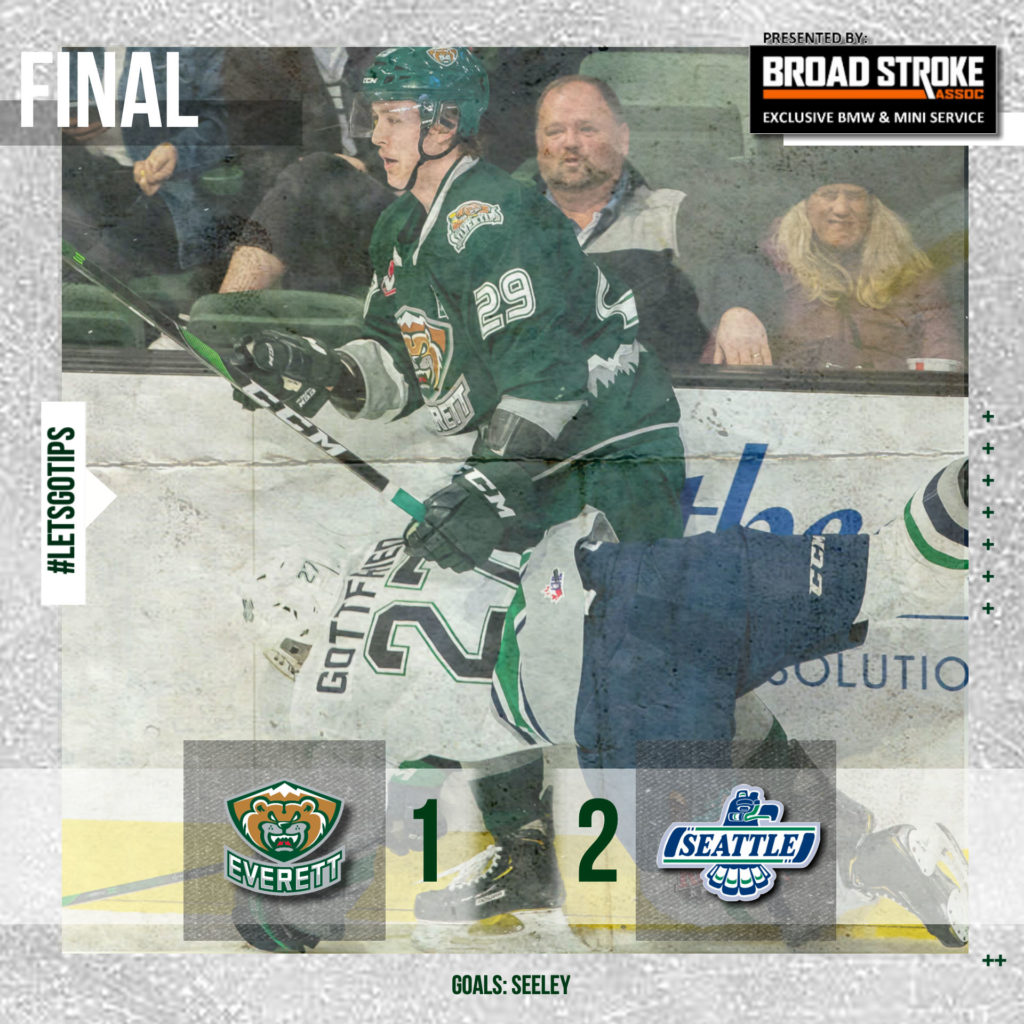 EVERETT, Wash. – Dustin Wolf, playing in his 100th career WHL game, turned in 36 saves but a crease-scramble goal awarded to Connor Roulette stood as the eventual winner as the Seattle Thunderbirds snuck past the Everett Silvertips, 2-1 before a crowd of 7,786 at Angel of the Winds Arena in downtown Everett on Saturday in WHL action.

Ronan Seeley scored a goal for the second straight game, 1:05 into the game while the Silvertips penalty kill went a perfect 3-of-3. Seattle earned their game-tying goal by Andrej Kukuca over three minutes into the first period, while Roddy Ross earned 32 saves in net.

UP NEXT: The Tips embark for a five-game trip and visit the Lethbridge Hurricanes on Wednesday, Dec. 4 at 6:05 p.m. (KRKO / Tips App), and return home for Teddy Bear Toss presented by Ace Hardware on Saturday, Dec. 14 against the Vancouver Giants, 7:05 p.m. in downtown Everett. Tickets are on sale with a large crowd expected, available at the link below. The game will also host the next Chick-fil-A Fan 4 Pack, offering 4 tickets and 4 sandwiches for as low as $56.

The Tips lead didn’t hold for long, as Seattle’s Andrej Kukuca netted his seventh of the season almost two minutes after Everett’s goal, converting an a two-on-one for Seattle’s first shot of the game.

After those goals, 44 minutes of pure speed and aggression led to both teams battling each other hard and both saw stretches of penalties (5 penalty kills for Seattle, 3 for Everett). The tie carried over into the third period after the Tips nearly found the back of the net on a scramble late in the second period, but found Bryce Kindopp’s power play bid blocked by a collapsing Seattle penalty kill.

With a physical battle escalating into period three, both Wolf and Ross traded saves with the tie holding up into the latter stages of the third period. Finally, with 6:02 left in the game, Connor Roulette found the back of the net on a scramble in front of Dustin Wolf to bury the game-winner, set up by Owen Williams, as Seattle forced the puck in through heavy traffic in the crease.

Wolf was pulled for a sixth attacker and after two attempts at the net, Seattle managed a final clear with 10 seconds left to drain the clock.

NOTES: Scratched from the lineup were Braden Holt (healthy), Aidan Sutter (healthy), Tyson Phare (injury),  and Jacob Wright (injury) … Cole Fonstad, assisting on Ronan Seeley’s goal, has an assist in 13 of the last 14 games … the Tips ended the month of November with an 8-3-1 record.