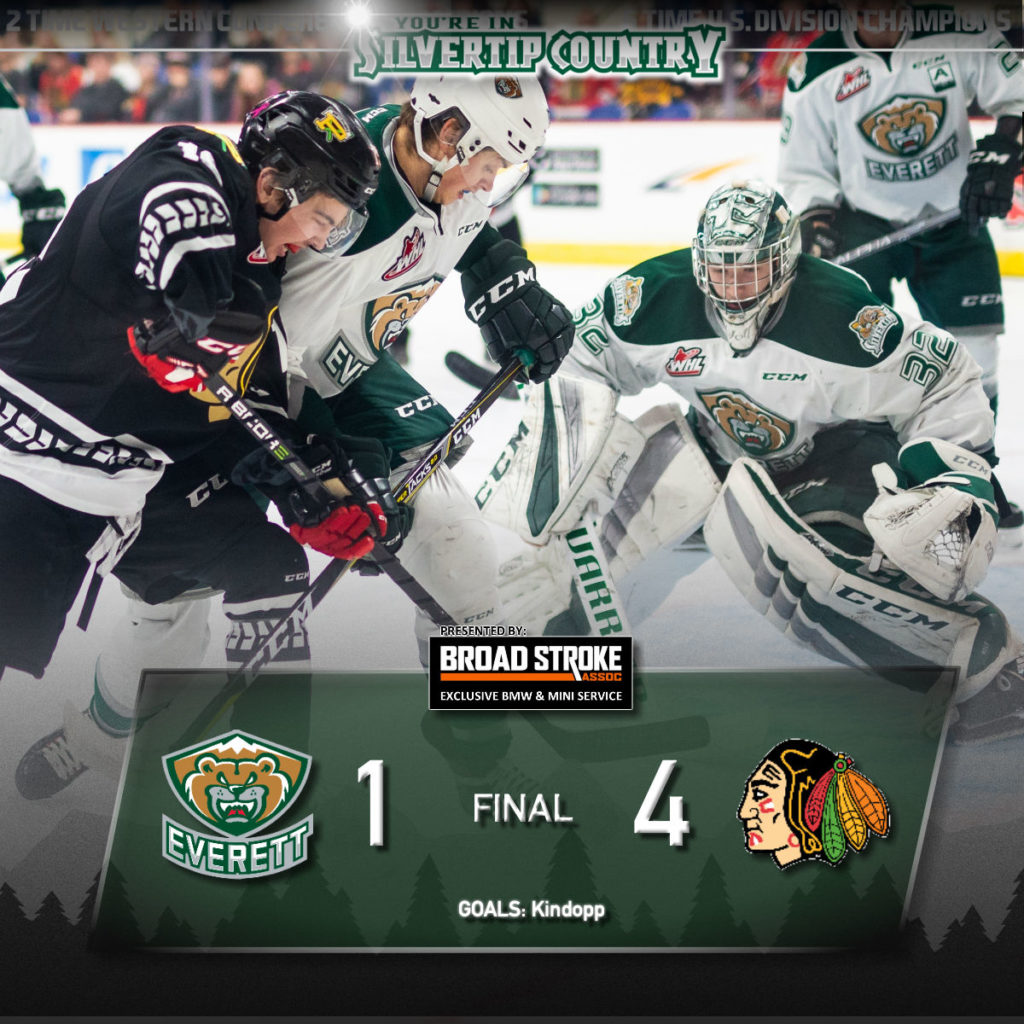 PORTLAND – Joel Hofer turned in 36 saves while Reece Newkirk added a goal and an assist to help the Portland Winterhawks get by the Everett Silvertips, 4-1 before 5,065 fans at Veterans Memorial Coliseum on Tuesday in WHL action.

The Silvertips, dropping back-to-back losses in regulation for just the third time all season, were supported by Bryce Kindopp’s program leading 39th goal of the season and Dustin Wolf’s 28 saves on 30 shots. The Tips finished the season series at 6-4-0-0 against Portland, and 24-9-2-1 against opponents from the U.S. Division.

UP NEXT: With two games left, the Tips return to action in Victoria on Friday for a 7:05 p.m. tilt against the Royals (1380 AM / 95.3 FM / TuneIn App / WHL Live) at Save-On-Foods Memorial Centre. The Tips return home for Fan Appreciation Night in their final regular season home game on Saturday against the Royals at 7:05 p.m. Saturday’s game is sold out and WHL Playoff tickets are currently on sale at www.everettsilvertips.com/playoffs.

The Tips had an 11-8 shots edge in the first period and nearly took a 1-0 lead on a Dawson Butt two-on-one, whose snap shot found Hofer’s pads and was nearly cleaned up by Kindopp. Reece Newkirk put Portland up for the game’s first goal, 4:50 into the second when he stole a clearing attempt at the right circle and buried a snap shot for his 22nd goal.

Joachim Blichfeld threatened to extend the lead to two on a late second period breakaway, denied by Wolf’s five-hole to keep the Tips down by one. But Jake Gricius secured the two goal lead at 5:28 of the third period on a screen at the net, deflecting Newkirk’s one-timer from the slot.

Kindopp delivered the Tips first goal after a face-off win late in regulation. On an extra attacker situation, Dewar threw the puck at the net from a sharp angle, left corner, and Kindopp stashed the loose puck at the crease with 2:30 left in regulation.

Jared Freadrich restored Portland’s two goal lead with 1:40 on a 180 foot heave to an empty net, and Lane Gilliss’s 15th goal of the season sealed the game’s final score on a second empty netter from center ice with a minute left.