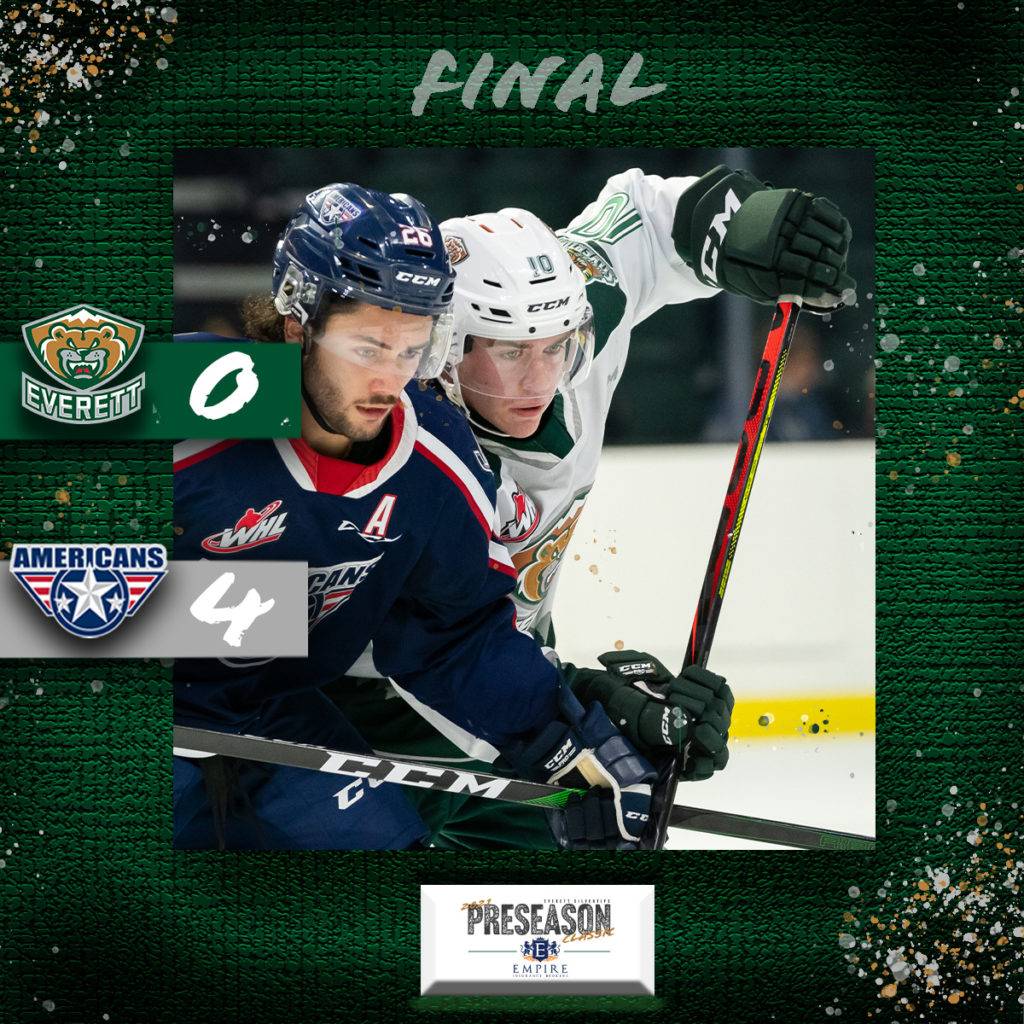 EVERETT, Wash. – Tomas Suchanek turned away 32 shots in his pre-season debut, padded by three third period goals and a pair of empty netters to help the Tri-City Americans get by the Everett Silvertips, 4-0 in the final game of the second day, in the Silvertips Preseason Classic presented by Empire Insurance Brokers, Saturday at Angel of the Winds Arena.

The Silvertips outshot Tri-City, 12-5 in the opening 20 minutes of play while generating a surge of scoring chances in the first five minutes, but were unable to capitalize. Their best look came on a point shot that got through to goaltender Tomas Suchanek, and a rebound that Niko Huuhtanen barely missed from the base of the left circle.

Both teams continued to battle through a scoreless tie through most of the second period and Evan May held the score together with a high-danger save on a Landon Roberts one timer with 3:52 left.

But eventually, Tri-City broke though when Rhett Melnyk buried a power play goal with 1:25 left in the second period, stashing a backhanded rebound attempt at the blocker side post of Evan May for a 1-0 lead. Melnyk snuck to the post while Mitchell Brown got his point shot through to the pads of May.

Dwayne Jean’s first pre-season goal, coming off the rush with a wrist shot from Parker Bell’s feed, boosted Tri-City to a 2-0 advantage 1:55 into the third period. The Silvertips appeared to cut the deficit in half on an Alex Swetlikoff wrap-around attempt on the next shift, but an official’s review upheld a waved-off call to maintain the score.

The Silvertips outshot Tri-City 13-4 in the final period to push their rally, but were halted on a pair of late empty netters. Melynk’s second goal of the game with 2:09 left put Tri-City up 3-0 and Parker Bell closed the scoring with 31 seconds left.

Evan May, making his pre-season debut in net for the Silvertips, stopped 15 shots.

The Silvertips fell to 1-1 in the pre-season and will look for two wins in three days, Sunday when they host Portland.