RECAP » Trimmed at the End 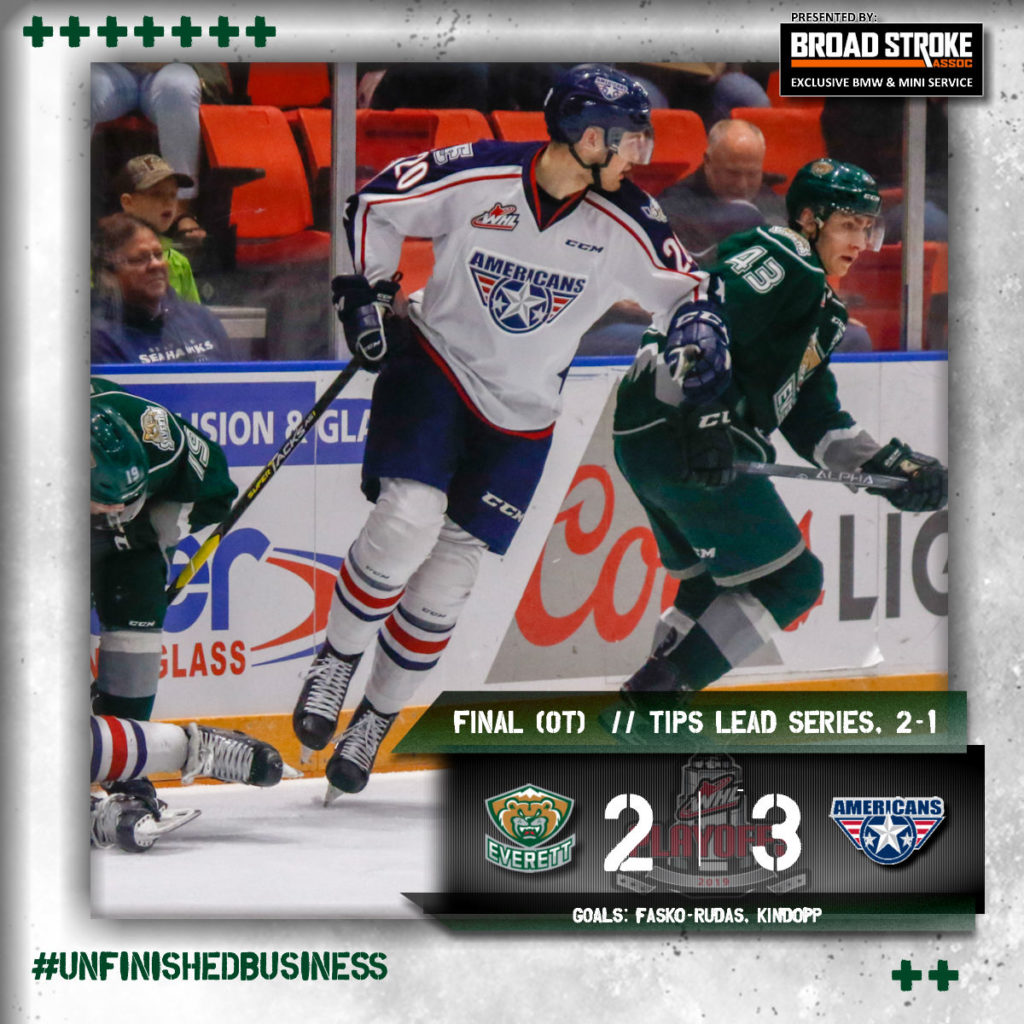 EVERETT, Wash. – Parker Aucoin stashed a rebound at 7:52 to help the Tri-City Americans get by the Everett Silvertips in overtime, 3-2 to cut the first round series for the Silvertips to 2-1 before 2,177 fans at Toyota Center on Wednesday night in WHL Playoff action.

Martin Fasko-Rudas and Bryce Kindopp each collected a power play goal for the Silvertips, who never trailed until the overtime winner by Aucoin on a power play.

UP NEXT: The Tips return for Game 4 on Thursday against Tri-City at the Toyota Center (1380 AM / 95.3 FM / TuneIn App / WHL Live), opening at 7:05 p.m. Game 5, assured for home ice in downtown Everett, is Saturday at 7:05 p.m. with tickets on sale at www.everettsilvertips.com/playoffs and offering a Hat Trick Special (hat, drink voucher, ticket) for just $36, available for purchase at this link.

Fasko-Rudas deflected Artyom Minulin’s point shot for a power play goal with 2:25 left in the first period for a 1-0 lead, and Samuel Stewart responded in-kind at 16:54 for a 1-1 tie in the second period after his blueline bid deflected off traffic.

The Silvertips rebounded for a 2-1 lead with eight seconds left in the period when Wyatte Wylie feathered a tape-to-tape feed to Gianni Fairbrother, unleashing a one-timer from the right point that deflected off Kindopp at the net for a power play goal.

Early in the third, Nolan Yaremko tied the game on a deflection at the Tips next at 2:16 for his third goal of the series, and from there Dustin Wolf and Beck Warm exchanged highlight reel saves. Wolf turned away a laser by Yaremko at the right circle with his glove, and with Warm denied a Gage Goncalves breakaway and follow-up by Zack Andrusiak.

Late in the game, the Tips nearly put Tri-City away but Reece Vitelli was stopped at the left circle on a break to the net, and Warm turned away Jake Christiansen’s bid from the right circle with 15 seconds to play.

The Tips continued to uncork grade-A looks into overtime and nearly won it four minutes in, when Jackson Berezowski barely misfired from the slot.

Tri-City earned the winner on their third man advantage, when Aaron Hyman’s one timer manufactured a rebound at the net that Aucoin put away with a diving effort for his first of the series.

NOTES: Silvertips scratches included Riley Sutter, Dylan Anderson, Justyn Gurney and Conrad Mitchell … the Tips moved to 8-7 on the road, all-time in Game 3 situations … Fasko-Rudas has scored seven goals in his last four games, dating back to the regular season.

radko gudas The Herald
THE STACKS // See Radko Gudas. Get Out of the Way.
4 hours ago