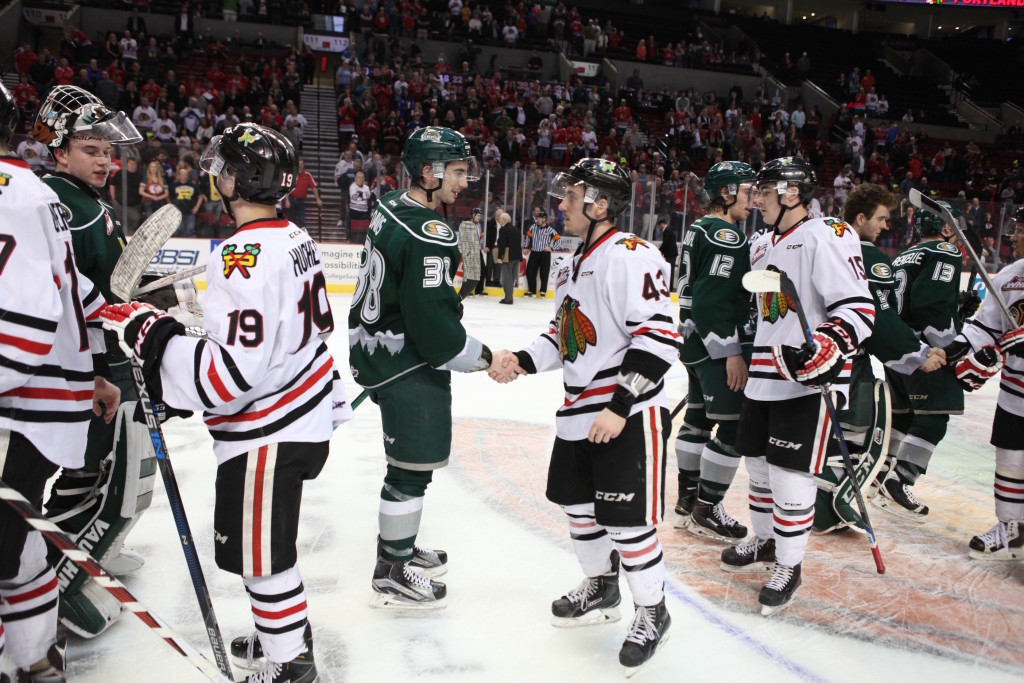 PORTLAND – Cole MacDonald scored a pair of power play goals and Carter Hart’s return between the pipes was a triumphant one on a 28 save effort, and the Everett Silvertips swept the Portland Winterhawks in a 4-2 victory in Game 4 of the first round of the WHL Playoffs, before 4,721 fans at Moda Center on Wednesday night.

The four-game sweep of the Winterhawks, their first playoff series victory against Portland since 2004-05, propelled the Silvertips into the second round for the second straight season where they’ll face-off against the Seattle Thunderbirds. The full schedule for the series will be announced soon and tickets for games at XFINITY Arena will be on sale through everettsilvertips.com/playoffs, by phone at (425) 252-5100 and in person at the Silvertips offices at XFINITY Arena.

The Silvertips, who trailed only for a total of 2:16 in the entire series, snapped a 2-2 tie late in the second period on MacDonald’s eventual game winner, followed by Brandon Ralph’s third goal of the series which put it away with 4:52 left in regulation.

MacDonald started the scoring at 12:30 of the first period when his first goal of the playoffs, from the center point position, sizzled through traffic for a 1-0 lead. But Portland, whose both goals came on the power play, found a way to strike back on Blake Heinrich’s drive from the right point that snuck past a screened Hart with 2:25 left for a 1-1 tie.

Hart delivered a show stopping glove save on an Evan Weinger breakaway early in the second period and shortly after, Connor Dewar outhustled the Winterhawks defense and slugged a snap shot past Adin Hill’s blocker from the left circle for a 2-1 lead at 2:42.

Keoni Texeira tied the game again at 2-2 at 10:18 of the period on a desperation wrister through traffic, following a series of Silvertips blocked shots. But the Tips drew Portland into penalty trouble late in the second period, and nearly cashed in on a two minute, two-man advantage power play.

Portland killed the sequence but a Rihards Bukarts delay of game infraction, stemming from an errant defensive zone clear, opened the door for MacDonald’s snipe in the final minute.

MacDonald corralled a Matt Fonteyne feed at the blueline and blistered a shot through a screened Hill with 32 seconds to play, lifting the Silvertips to a critical 3-2 lead.

They kept the lead intact through the final period while Hart turned away eight shots, and Ralph’s backbreaking goal at 15:08 delivered a 4-2 advantage. Brian King, whose three of four goals came at the expense of the Winterhawks in the regular season, feathered a low wrister off Hill’s pads from the right circle. Ralph, streaking through the left wing, slammed the rebound into a half-open net for the two-goal cushion.

The Silvertips extinguished one last Portland power play and the final minutes on the clock to preserve their first round sweep.

NOTES: The Silvertips last sweep came in 2004 vs. Spokane in the opening round, en route to a trip to the WHL Finals … Fonteyne is on a three-game playoff scoring streak … eight different Silvertips collected a point or more … the Silvertips led the game in shots, 34-30 … the Silvertips improved to 9-6 in elimination games.