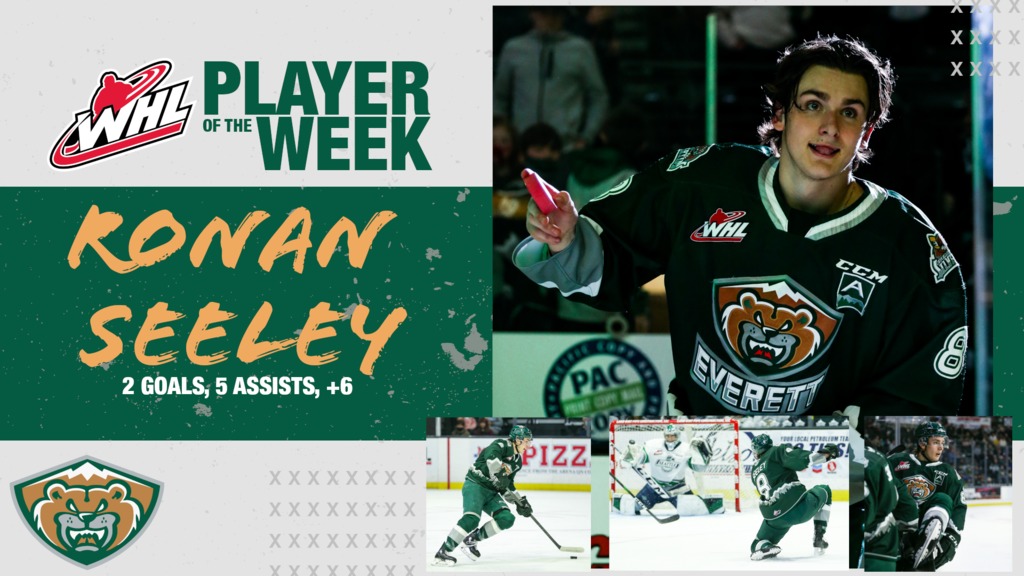 EVERETT, Wash. — Everett Silvertips captain Ronan Seeley has officially been named Player of the Week by the Western Hockey League for the week ending Nov. 21, 2021.

Seeley, a 19-year-old Olds, AB native skating in his fourth WHL season, notched two goals with five assists and a +6 rating over the course of four games this past week, all Everett wins. Four of his seven points came on the powerplay- a goal and three assists. His other goal, a coast-to-coast equalizer in Portland on Tuesday, Nov. 16, earned the #1 spot for WHL Play of the Week.

Ronan Seeley on a 3-point night in Everett: pic.twitter.com/rDScySKG3Z

“The growth of Ronan’s game has been substantial from last year to this year,” commented Silvertips head coach Dennis Williams. “A lot of that is attributed to him and the amount of work he put in in the offseason. This year, he came and has been playing a really confident, mature hockey game. He’s been a leader for us on and off the ice.”

Seeley now has 17 points on the year, tied for third in the league in scoring among defensemen. His five goals ties a personal best for a single season. He also ranks sixth overall in the WHL in plus-minus with a +19 rating.

“The plus-minus goes to show how much pride he takes in playing not only with the puck but without the puck,” Williams noted. “He had an outstanding week.”