Round 3 Up Next: Western Conference Final 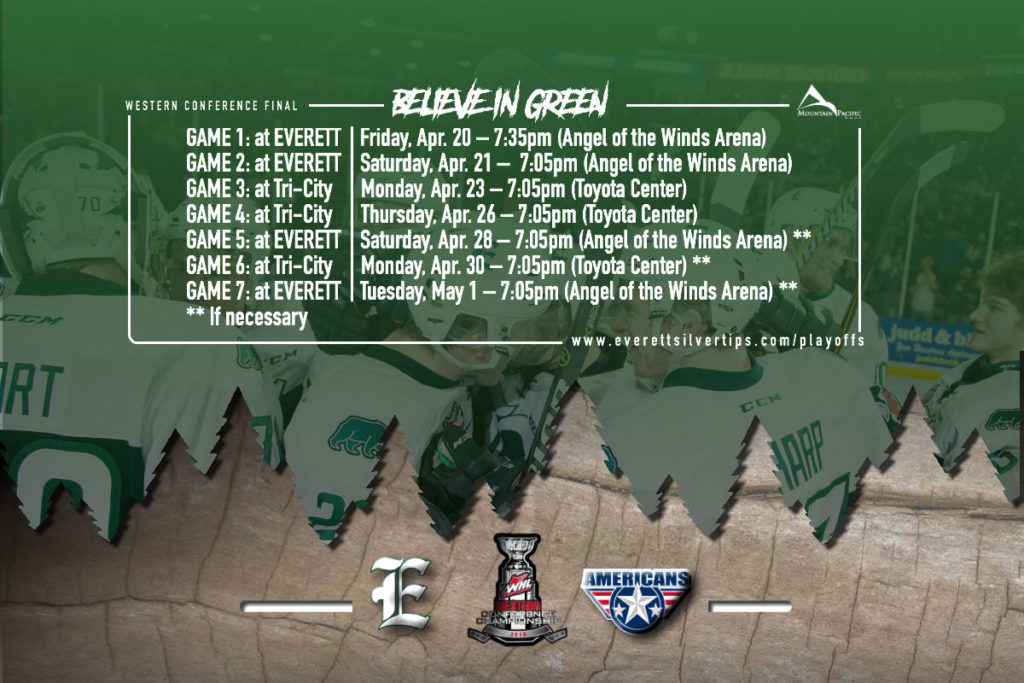 EVERETT, Wash. – The Everett Silvertips (@WHLSilvertips) have advanced to the Western Conference Final for the third time in franchise history and will continue the WHL Playoffs presented locally by Mountain Pacific Bank in a best-of-seven series against the Tri-City Americans starting Friday, Apr. 20 at Angel of the Winds Arena in downtown Everett at 7:35 p.m. The winner of the series will advance onto the WHL Finals and face the winner of the Eastern Conference Final.

Tickets are on sale now in person at the Silvertips offices, by phone at (425) 252-5100 or at www.everettsilvertips.com/playoffs.

All games will be carried live on radio at Fox Sports 1380, 95.3 FM, the Silvertips mobile app and streamed on WHL Live.

The Silvertips will face the Americans for the fourth time in postseason history and last met in the first round of the 2012 WHL Playoffs, with the Americans winning the series, 4-0. Prior to a 4-1 series victory over the Seattle Thunderbirds in the first round, and a 4-1 series victory over the Portland Winterhawks in the second round, the Silvertips clinched their sixth U.S. Division banner with a record of 47-20-3-3 (99 points) the third highest point total in franchise history. Their 47 wins are second most in franchise single season history, and their 245 goals broke the franchise mark for most in one season.

This season, the Silvertips went 5-2-1-0 in eight meetings with Tri-City. Matt Fonteyne led the Silvertips with 16 points (4g-12a) in 8 head-to-head meetings while Morgan Geekie led Tri-City with 9 points (2g-7a) in 7 games.

Tri-City advanced to the Conference Finals after defeating the Victoria Royals, 4-0 in the second round and the Kelowna Rockets, 4-0 in the first round.

Season Membership deposits for the Silvertips 2018-19 season are being accepted for $50 at www.everettsilvertips.com/ticketcentral or by calling (425) 252-5100.