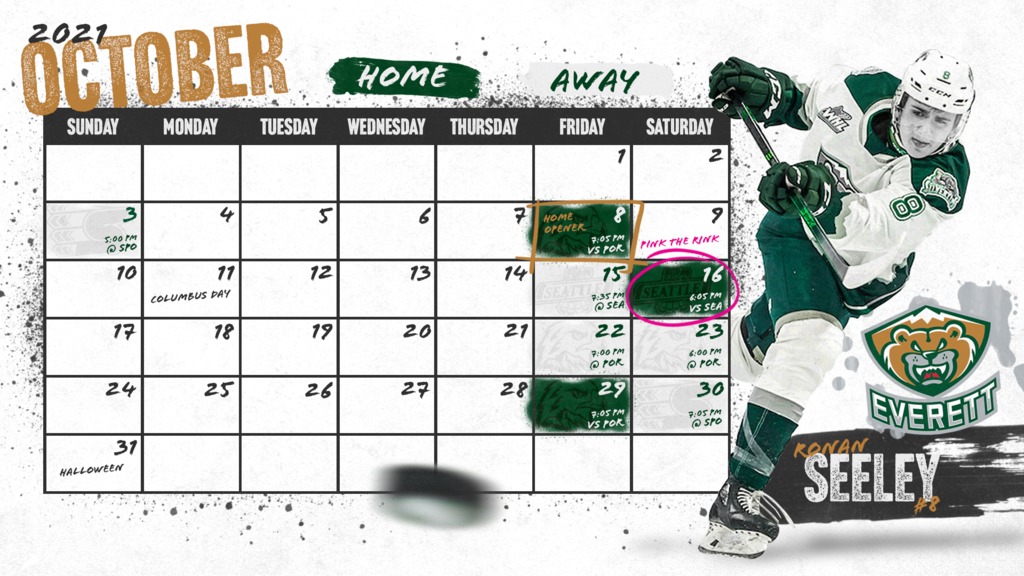 The following changes have been applied (new dates in bold, all times PT):

The Silvertips full schedule, in addition to pre-season, can be viewed here. Due to ongoing border restrictions preventing non-essential bus travel from Canada into the United States, teams in the U.S. Division will compete exclusively against divisional opponents, while teams in the B.C. Division will compete exclusively against their division opponents during the month of October. The WHL continues to work with government and public health authorities in each of the six provincial and state jurisdictions located in WHL territory to ensure the health and safety of WHL players, staff, and officials, as well as the communities in which the WHL operates.

The Silvertips home schedule, which still begins with “Opening Night” on Oct. 8 at 7:05pm against Portland at Angel of the Winds Arena, now includes games on Friday, Saturday, or Sunday for 30 of 34 dates. The Silvertips open their 19th season of play in the WHL and defense of their eighth U.S. Division title will open on Sunday, Oct. 3 against the host Spokane Chiefs, 5pm at Spokane Arena.

Priority seating and guaranteed home opener tickets for “Opening Night” in downtown Everett are available now by placing a $50 deposit for Silvertips Season Ticket or Mini-Plan Packages (available in full season, 22-game, of 14-game plans) at www.everettsilvertips.com/deposit or by calling (425) 252-5100 (extension 1). Further details on the Silvertips game-by-game promotional and giveaway schedule will be announced soon.

The Silvertips open the 2021-22 pre-season on Friday as part of the annual Silvertips Preseason Classic in downtown Everett, 6:00 p.m. against the Spokane Chiefs. The six-game, three-day event will host the Silvertips fellow U.S. Division rivals, with ticket packages available at www.everettsilvertips.com/tickets.