Season Preview // Tips Optimistic for What 2018-19 Will Bring 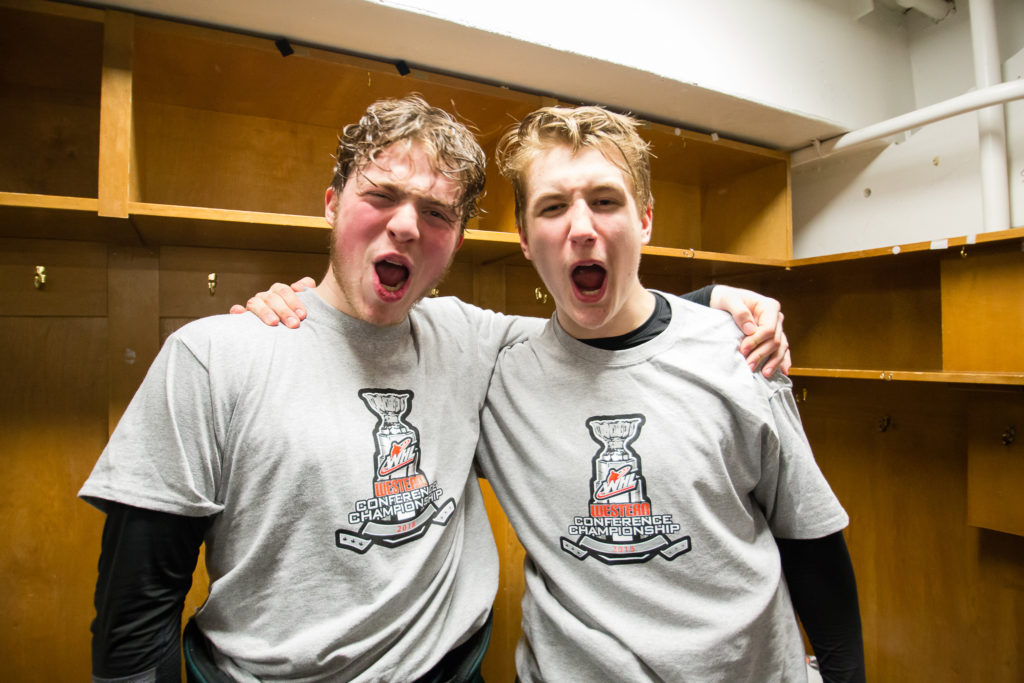 The Everett Silvertips of the 2018-19 season are not the same team who made the Rogers WHL Championship Series last season. There’s plenty of unfamiliar faces on the roster as the season kicks off on Friday in Vancouver, and a few missing pieces that helped take the team nearly all the way.

Despite this, and a shorter than average offseason, the Tips are optimistic for what this season will bring. Part of it is their host of returning players, four who spent the last couple weeks at NHL training camps soaking up a wealth of knowledge from pros. Part of it is new additions like defenseman Sahvan Khaira, an opponent in last year’s championship series, who will add experience to the Tips blue line. Part of it is everything they learned in a near miss with the league trophy last year, and everything it takes to build a championship team.

“Seeing what it took last year going through the playoffs, it was pretty tough taking it at the time but it’s good with a lot of returning guys we know what it takes now,” alternate captain Riley Sutter said. “We know a few things we have to do to take the little extra step to have the success we didn’t get last year.”

Sutter just returned from training camp with the Stanley Cup champion Washington Capitals, but before that a 53 point season, the second highest of the returning Silvertips after captain Connor Dewar. He’s part of a returning core of forwards anticipated to lead the team this season after the departure of five year Tips Matt Fonteyne and Patrick Bajkov. He and Dewar, along with defensemen Wyatte Wylie and Jake Christiansen, will be bringing not only years of WHL experience, but also this year’s NHL training camp experience to the team.

“There’s a big jump from playing in the NHL from here. All the guys are just a lot bigger and quicker and on the ice you have less time to make decisions and the executions a lot better at that level,” Sutter said. “It’s a pretty big jump but I think with the guys that went to camps, we can just bring everything we learned there coming back and we can use that to help the team here.”

Last season didn’t see the best start for the Silvertips, although they bounced back after a tough October. This year they’re hoping to look strong right out of the gate, but the mindset is the same as last year.

“We’d like to win a few more games than we did last year right off, but right now we’re just focusing on one period at a time, one shift at a time,” head coach Dustin Williams said.

Beyond quite a few personnel changes for the Tips, they don’t want much to change. They’re keeping that same mindset, along with the same style of play that got them further in the playoffs than they’d been in 14 years.

Richards was the Tips preseason points leader and fell just one point shy of the 50 point mark last season. He’s one of several players who will be taking on a bigger role this season. Joining him is Martin Fasko-Rudas, who didn’t quite show what he was capable of last season despite hinting at it in a few games bumped up to the top line.

On the blue line, Everett native Wyatte Wylie’s breakout 2017-18 season solidified him as a leader, and what he brings back from Flyers camp should help as well. Recent addition Khaira’s experience on the WHL champion Swift Current Broncos fills in a spot in the core left by five year Tip Kevin Davis, but Jake Christiansen will look to step into a bigger role as well, fresh off Calgary Flames camp.

The Tips lost three major players in their overages last year, but the biggest roster change is in goal. With two time CHL Goaltender of the year Carter Hart making a professional bid this season, Dustin Wolf will be between the pipes following a stellar rookie season.

After heading all the way to the championship series it was a short offseason for Everett, but the team is prepared to go again, and optimistic for what the season will bring.

“Not the longest summer I’ve had but it was worth it for the season we had last year so I’m excited to get things going here,” forward Bryce Kindopp said.

The Tips want to take the experience gained from the Western Conference championship run, but not the pressure or expectations that come with making it that far last season.

“Definitely some personnel differences going with our group, but I like our tempo, I like the compete,” Williams said. “A lot of guys returning who have been through a great season last year. I’ve said to them and keep going: last season’s over with and now it’s just time to focus on the 2018-19 season.”