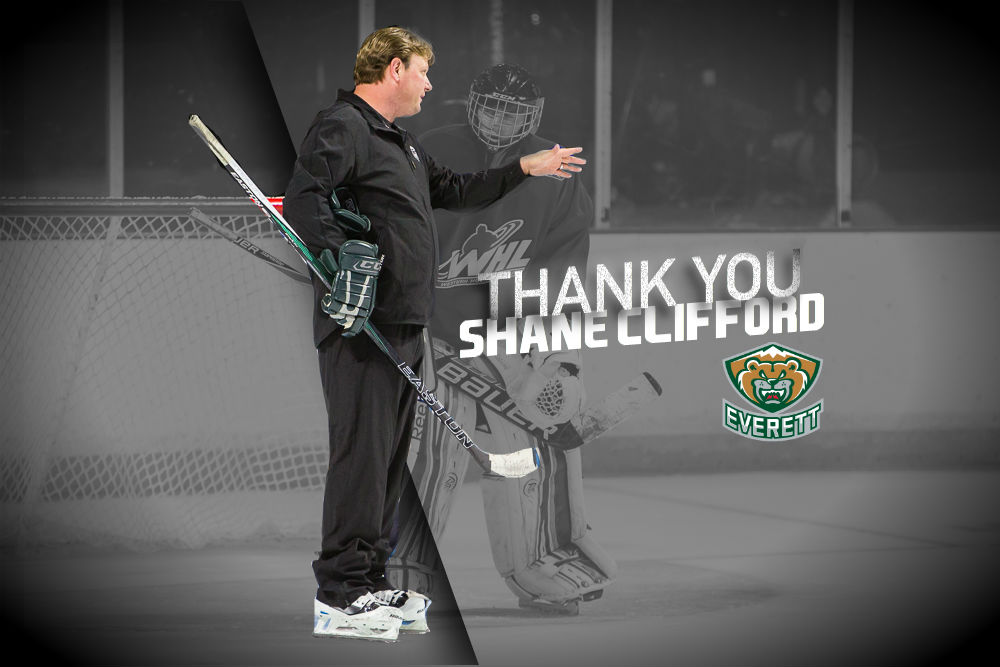 “The Everett Silvertips thank Shane Clifford for his service of over a decade and contributions to the organization and its goaltenders,” said Silvertips general manager Garry Davidson. “His work with the goaltending position was excellent, helped shape esteemed careers, and the amount of expertise and dedication he brought to his position set a great example. We understand Shane’s decision to pursue new opportunities that make sense on a personal level, and he will always be a part of our family.”

“The matter of fact is because Everett has been so good to me and for my career, a decision like this was extremely difficult to make,” said Clifford. “I thank the Silvertips for memories, great players, great people, and appreciate the organization’s understanding of pursuing an opportunity that’s closer to home. When you work in a place like Everett for over a decade, it becomes a part of you. That’s what the Silvertips mean to me. My thanks to Mr. Bill Yuill, Garry Davidson, Zoran Rajcic, and the Silvertips coaching staff – and past coaches – for their support and creating a work environment that’s second to none.”

Clifford, a resident of Pittsburgh, Pennsylvania, helped mold an assortment of the top netminders in Silvertips history throughout his 11 years with the Tips coaching staff. Overage netminder Jeff Harvey helped the Tips win a Western Conference title in 2004, Mike Wall earned a free-agent NHL contract in 2005, Leland Irving was a first-round NHL draft pick in 2006, Kent Simpson was selected in the second round of the NHL Draft in 2010, and Carter Hart was the first goaltender selected in 2016 (second round), earned three WHL Goaltender of the Year, the 2018 WHL Player of the Year awards, and became the first goaltender in Canadian Hockey League history to earn the Vaughn CHL Goaltender of the Year award.

Clifford was hired in 2005 as Goaltending Coach for the NHL’s Pittsburgh Penguins, where he guided future Stanley Cup Champion Marc-Andre Fleury in his second NHL season. Clifford spent a brief professional playing career in the International Hockey League and ECHL before going on to coach for numerous teams in a series of leagues.

He has coached pro goalies for the Wilkes-Barre/Scranton Penguins (AHL), Johnstown Chiefs (ECHL) and Les Ducs d’Angers (French Elite League), collegiate goalies at Ohio State University (NCAA) and junior puck-stoppers for the Youngstown Phantoms (USHL) and Wenatchee Wild (NAHL). In addition to coaching at the team level, Clifford has owned and operated the Shane Clifford Goalie School just outside Pittsburgh, Pennsylvania since 2000.