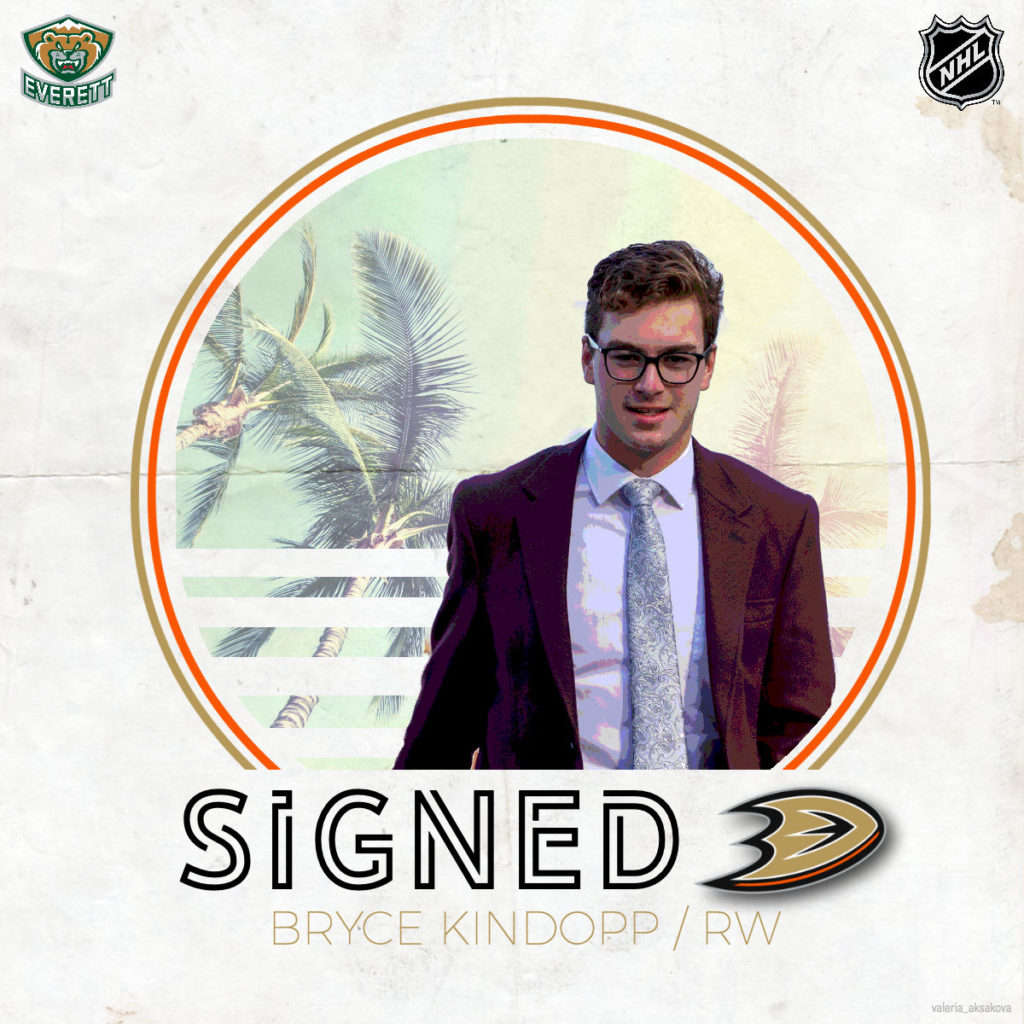 “Bryce Kindopp is one of those players combining excellent talent and character, and we’re extremely proud of him for achieving a landmark day in his career and life by signing with the Anaheim Ducks,” said Silvertips general manager Garry Davidson. “He has embraced every responsibility as a Silvertip, forged his own legacy, and developed necessary habits to be successful at the pro level. It’s also a day to celebrate our organization and the abilities to place individuals on the NHL radar, and our coaching staff who operate with a great reputation for preparing players for the next level. We look forward to Bryce’s continued contributions here for the remainder of our season as a leader, and look forward to following his future accomplishments.”

For his Silvertips career, the 6-foot-2, 190 pound forward ranks:

Kindopp has skated on the last three Silvertips clubs that captured the U.S. Division title and was a part of the Silvertips 2017-18 Western Conference championship squad. He has skated in 42 career WHL playoff games with 17 points. Last season, he earned a career high 11 points (5g-6a) in 10 playoff games.

“Obviously this is a moment I’ve worked for my whole life as a hockey player, and taking this next big step is an incredible opportunity that I’m extremely grateful for,” said Kindopp. “Taking advantage of the opportunities offered to me in Everett helped make this day possible, including the support of the organization, my teammates, friends, billets Pat and Janet Hawes, and certainly my family. I’m thankful for the coaches and staff who have helped me along the way, from Dennis Williams and the path he guided me on, to Kevin Constantine, who gave my first chance, to general manager Garry Davidson, who never stopped believing in me. My teammates here have been the best I’ve ever had, and we’ll forever be tied together with lifelong bonds. I can’t thank the Anaheim Ducks organization enough for giving me this opportunity, and I can’t wait to get to work on pursuing each next step with the pro level, starting with contributing in the stretch drive and postseason in Everett.”

The native of Lloydminster, Alberta has skated in NHL development camp and training camp with the Colorado Avalanche and was originally selected by the Silvertips in the third round (49th overall) of the 2014 WHL Draft.

This season, Kindopp has 21 multi point games, and three times posted four points in a single game. He was named captain of the Silvertips for the 2019-20 season, and earned his first career hat trick on Feb. 1, 2019 at Seattle.