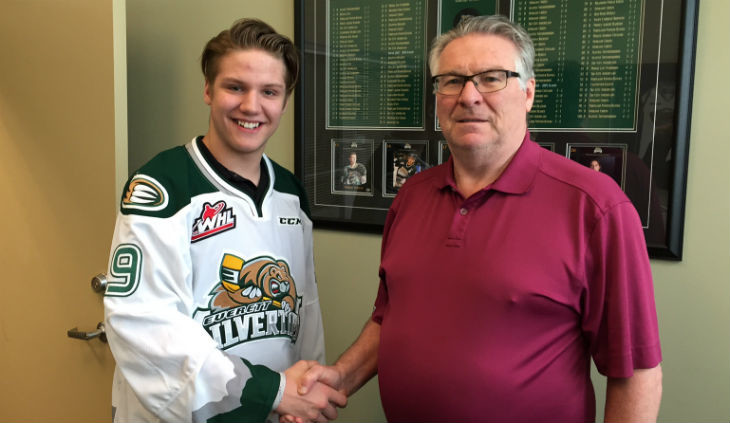 Butt, a native of Buckley, Wash., becomes the third player raised and trained in the state to sign with the Silvertips since last September, joining defenseman Wyatte Wylie and forward Sean Mallonee. He was originally selected by the Silvertips in the sixth round (118th overall) of the 2015 WHL Bantam Draft.

“Dawson continued to demonstrate rapid progression in his two-way game last season as a forward that we’re excited about,” said Davidson. “He brings fearless and rugged dimensions and possesses good hockey instincts. His development is a testimony for the game’s unceasing outreach in the Pacific Northwest and we look forward to his continued growth.”

“Out of the teams I’ve coached, Dawson is as far along as anybody with playing a WHL and NHL style of game,” said Stevenson. “He is very good away from the puck and can play all three positions. He has embraced the essence of the two-way game and understands that to be an effective player, he needs to be reliable on and off the puck. The tools are in place for him to make a great career out of this.”

The 2000-born forward was the 2014-15 nominee for Select MVP with the Sno-King AHA (14U A1). Dawson’s father, Jamie, suited up for four WHL seasons (1992-96) with the Tacoma and Kelowna Rockets, posting 41 points and 514 penalty minutes in 156 career games followed by two seasons with the Tacoma Sabercats (WCHL) as an 11th round selection in the 1994 NHL Entry Draft of the New York Rangers.

The Silvertips will announce their 2016-17 schedule soon, offering full season tickets, 22-game, and 14-game plans for as little as $200 total per seat. Deposits for $50 secure a seat by visiting the Silvertips deposit portal.