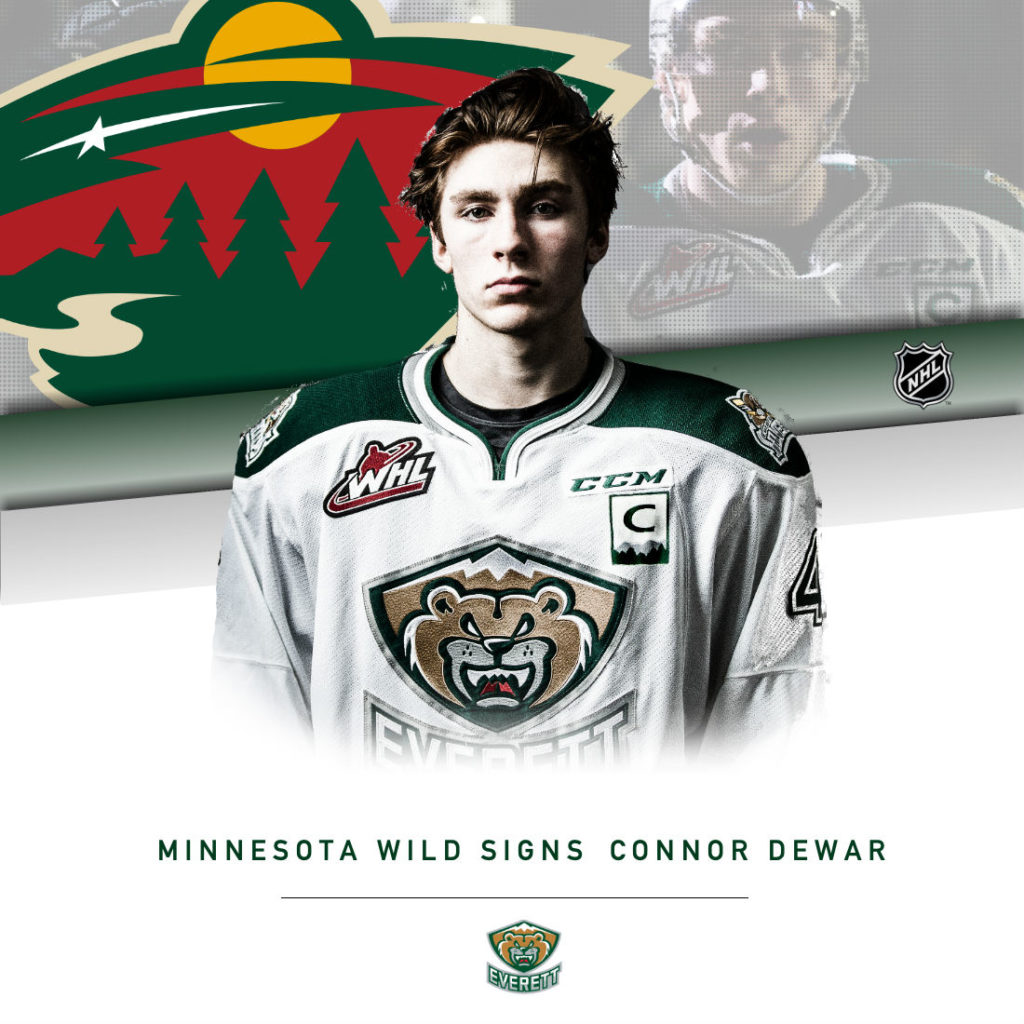 EVERETT, Wash. – The Everett Silvertips (@WHLSilvertips), seven-time U.S. Division champion of the Western Hockey League, and general manager Garry Davidson announced in conjunction with the Minnesota Wild of the National Hockey League that Silvertips forward and captain Connor Dewar has signed a three-year, entry level contract with the Wild, effective starting in the 2019-20 season.

“Connor’s tireless dedication and work ethic brought an exciting day like this to reality, and we’re extremely proud of him,” said Davidson. “He wasn’t just satisfied with a breakout season and Conference title last year and it showed the moment he returned for day one of training camp this season as captain. His relentless approach and attitude are two necessary intangibles for a successful career at the pro level. He is a model of perseverance for current and future players of our program, and we look forward to his continued contributions for the remainder of the regular season and playoffs.”

He has been a part of three consecutive Silvertips teams that captured the U.S. Division title, and last season earned their second trip to the Rogers WHL Championship Series as Western Conference champions.

“It’s a nice time to reflect on everyone who’s made this day possible and helped make this lifelong goal possible, to become a professional hockey player,” said Dewar. “Many thanks to my friends, family, coaches, and teammates. It’s not just a day for me, personally, it’s a day for everyone. My mother, Kim, and father, Jade, made a ton of sacrifices to give me opportunities to play where I could, growing up. I’m excited to continue chasing success this season as a Silvertip, and will look forward to take the qualities I’ve learned from my time in Everett into the Minnesota Wild organization.

The native of The Pas, Manitoba has racked up 21 multi point games this season, and came within one goal or assist shy of tying the Silvertips record for most points in a game (7), when he had a hat trick and added three assists on Feb. 2 against the Seattle Thunderbirds.

Originally selected by the Silvertips in the fifth round (107th overall) of the 2014 WHL Draft, Dewar additionally skated in NHL Development Camp with the Toronto Maple Leafs in 2017. He is scheduled to continue skating with the Silvertips for the duration of the 2018-19 season.

Silvertips “Game A + B” playoff packs are on sale now at www.everettsilvertips.com/tickets, with the first round scheduled to play in downtown Everett starting on Friday and Saturday, Mar. 22-23. The Silvertips first round opponent and remaining schedule will be announced soon.