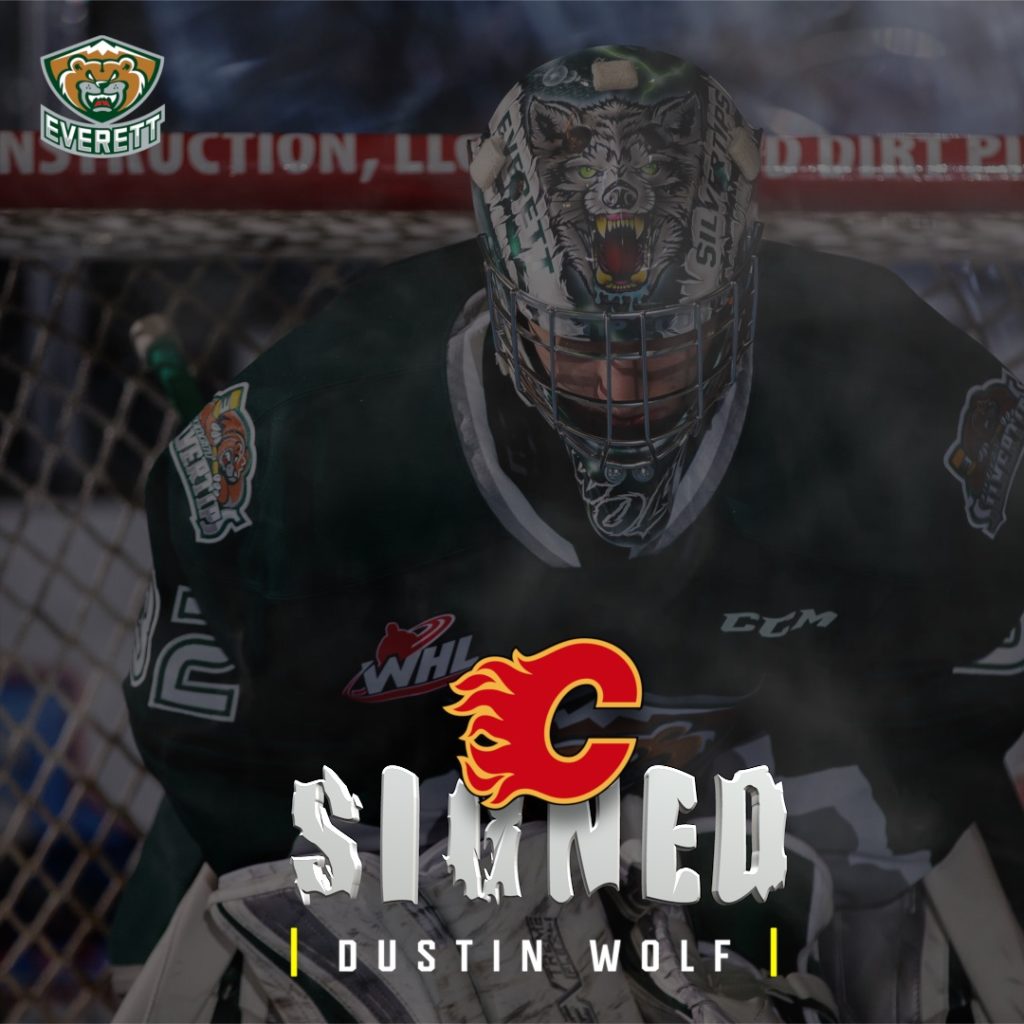 “From day one Dustin has performed and conducted himself like a consummate pro, mature beyond his age by a wide margin,” said Silvertips general manager Garry Davidson. “He’s proven that commitment and talent overcome any obstacle thrown his way, especially for his position as a goaltender. He’s used the challenges heard in the last year to fuel his inner drive. It makes us very proud for him to achieve this day, especially from the commitment he and his family made to the game. We’re excited to see where it takes him down the road as a member of the Calgary Flames organization after his time in Everett is complete.”

Wolf, 19, was most recently named back-to-back Western Conference Goaltender of the Year of the Western Hockey League for the 2019-20 season, leading or tying for the lead for the WHL in four goaltending categories: wins, shutouts, save percentage, and goals-against-average while, was named Silvertips co-Most Valuable Player and twice was named WHL Vaughn Goaltender of the Month this season. With Wolf in net, the Silvertips reached the top of the WHL’s U.S. Division and Western Conference with a 44-12-3-1 record through 60 games, good for 92 points and finishing the season with victories in 13 of their final 14 games, a 46-13-3-1 record, 96 points – second most in the U.S. Division and entire league.

The 2001-born goaltender earned a victory in his first prospect game appearance with the Flames, an 18-save performance against the Edmonton Oilers in a 3-1 victory at Scotiabank Saddledome on Sept. 10.

“It’s an extremely exciting day to sign with the Calgary Flames, a goal that was set out almost a year ago following the NHL Entry Draft,” said Wolf. “It’s a dream come true to sign my first National Hockey League contract and it’s another step in the right direction. My goal is to reach the NHL, but there is still a ton of work to put in, to make that day a reality. Today’s milestone is a positive step in that direction, and I owe a world of gratitude to my head coach Dennis Williams, coaching staff, James Jensen, my teammates, and family for making this day possible. I look forward to continue working hard as a Silvertip and prepare for the next steps with the Flames.”

The native of Tustin, Calif. was selected by the Flames in the 7th round of the 2019 National Hockey League Entry Draft and embarked on a season where he led the WHL in goals-against-average (1.88), shutouts (9), save percentage (.935), and tied Joel Hofer of Portland for the league lead in wins (35), going 34-10-2-0 in 46 games. In Silvertips single season history, his nine shutouts tied Carter Hart (2016-17) for third, his .935 save percentage is third highest, and his 35 wins tied Hart (2015-16) for third. Last season, Wolf also represented USA Hockey at the 2020 IIHF World Junior Championships, earning a victory in his sole appearance.

Wolf is eligible to suit up for Calgary in the 2020-21 season or return to the Silvertips for his fourth full WHL season.