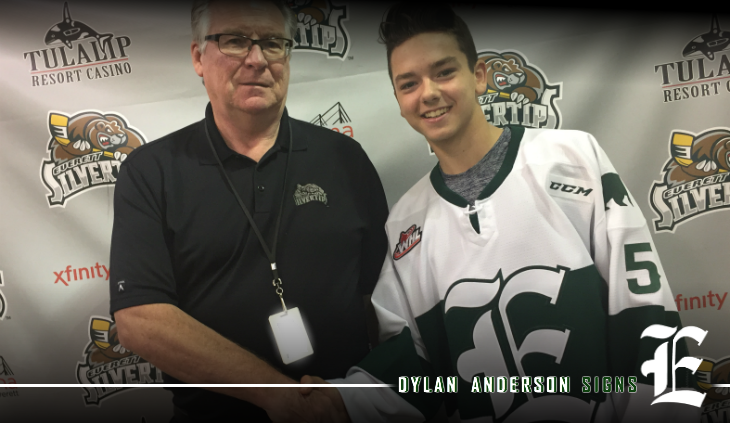 “It’s a very exciting day to welcome Dylan to the Silvertips family and we’re thrilled of his terrific decision to pursue the next steps of his career in Everett and the Western Hockey League,” said Davidson. “His success is supported by a great mix of character and work ethic. He brings a valuable skill set to our blueline and we’re confident his upcoming season with the Fraser Valley Thunderbirds will properly prepare his future as a player in our program.”

Anderson, a 2002-born defenseman, posted 12 points in 28 games last season with Yale Hockey Academy (CSSBHL) and was third on the club’s defensemen in points (12) and assists (10). He concluded the regular season with five points in the final six games and posted an assist in four postseason games.

The native of Langley, British Columbia was selected by the Silvertips in the fourth round (75th overall) of the 2017 WHL Draft.

“The sky’s the limit with Dylan,” said Silvertips director of player personnel Bil La Forge. “We’ve seen it before with defensemen like Noah Juulsen and Kevin Davis. “When you possess high end skill at his age, the possibilities with his development are massive. His passes are crisp and his shot is heavy. He’s got the ability to evade forecheckers with quickness, see several reads with the puck, and make the smart play every time.”

Anderson joins forward Jackson Berezowski and goaltender Blake Lyda as players signed by the Silvertips from selections in the 2017 WHL Draft.

The Silvertips skate next in the Vancouver Giants pre-season tournament on Saturday and take on the Prince George Cougars at Langley Events Centre at 2:00 p.m.