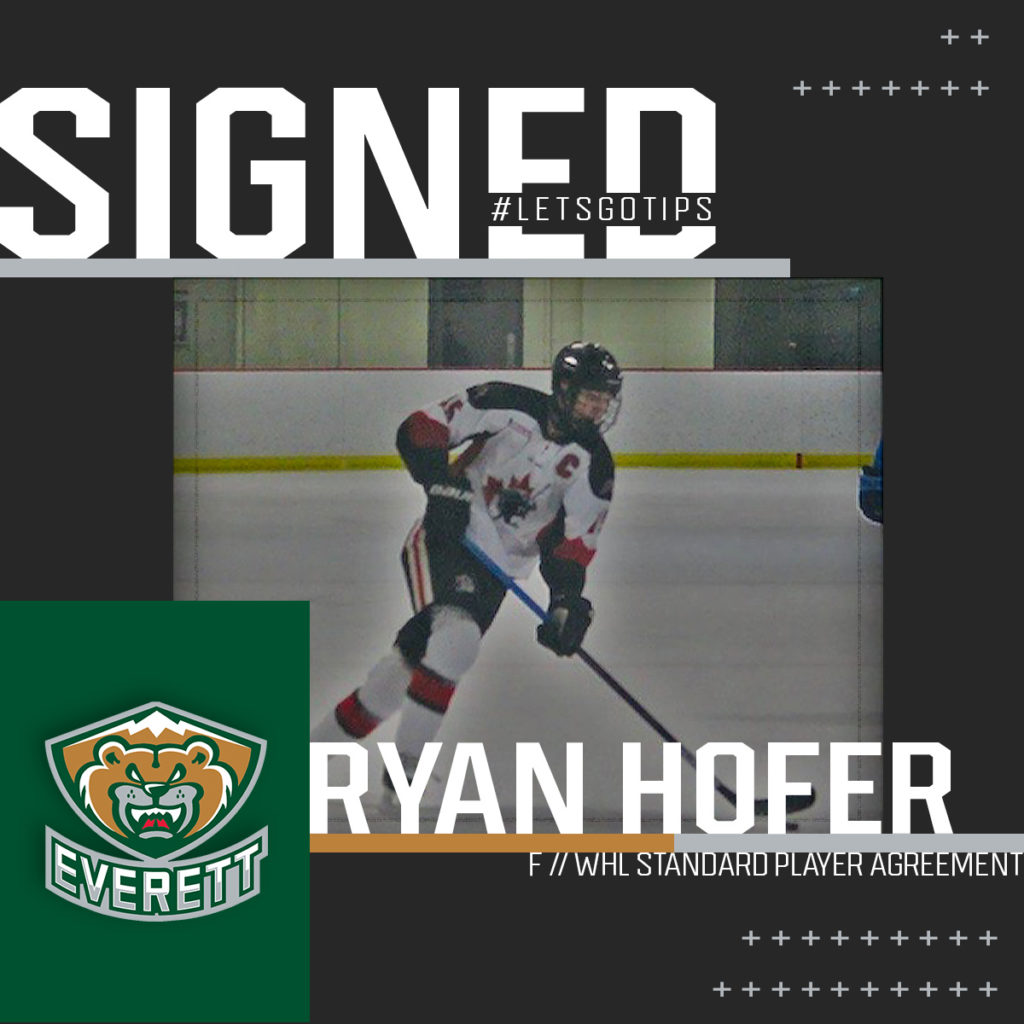 “Ryan is a forward who’s worked extremely hard for this day to become possible and we’re proud to welcome him to the Silvertips family,” said Davidson. “His size, compete level, and developing skill set have the potential to be a great fit in our organization. As his brother Joel has forged a successful career in the WHL as a goaltender, it’s indicative of how hard his work ethic and ambition is rooted. We look forward to seeing him in training camp.”

Hofer, who turned 18 on May 10, last season skated with the Pursuit of Excellence Midget Prep program (CSSHL) and finished tied for the club lead with 51 points (26g-25a) in 35 games, also ranking second in goals (26) and assists (25). The Winnipeg, Manitoba native added a goal and an assist in a pair of playoff games and also racked up six points (4g-2a) in three games with the P.O.E. 18U program (NAPHL).

“Ryan is a big bodied forward with offensive flair and a consistently high compete level,” said Silvertips director of player personnel Alvin Backus. “He has the ability to play all three forward positions, possesses good puck skills, and a heavy, accurate shot. He’s fully capable of challenging for ice time this next season and eventually as he gets older, into a player who can contribute within the top two lines. Similar to current Silvertips such as Gage Goncalves, Justyn Gurney, Brendan Lee, Jacob Wright, and Aidan Sutter, who worked hard to break through after being undrafted, he’s demonstrated value by working hard at his game to make this day possible. A core value of our organization is continuously searching for those kind of prospects, and we’re looking forward to welcoming him to Silvertips training camp.”

“Today leaves me extremely thankful to sign with the Everett Silvertips, a strong, passionate team over the years with great fans,” said Hofer. “I’m looking forward to delivering a tough, hardworking style of play with offensive, playmaking abilities. Having a chance to play in downtown Everett is very exciting and I’ll be giving it my all to contribute to the team. I couldn’t be happier for the opportunity to be a Silvertip and can’t wait for the upcoming season.”

Hofer’s brother, Joel, recently finished his third season in the WHL as a goaltender for the Portland Winterhawks, was selected in the fourth round (107th overall) by the St. Louis Blues in the 2018 NHL Draft, and earned a gold medal with Team Canada at the 2020 IIHF World Junior Championships.