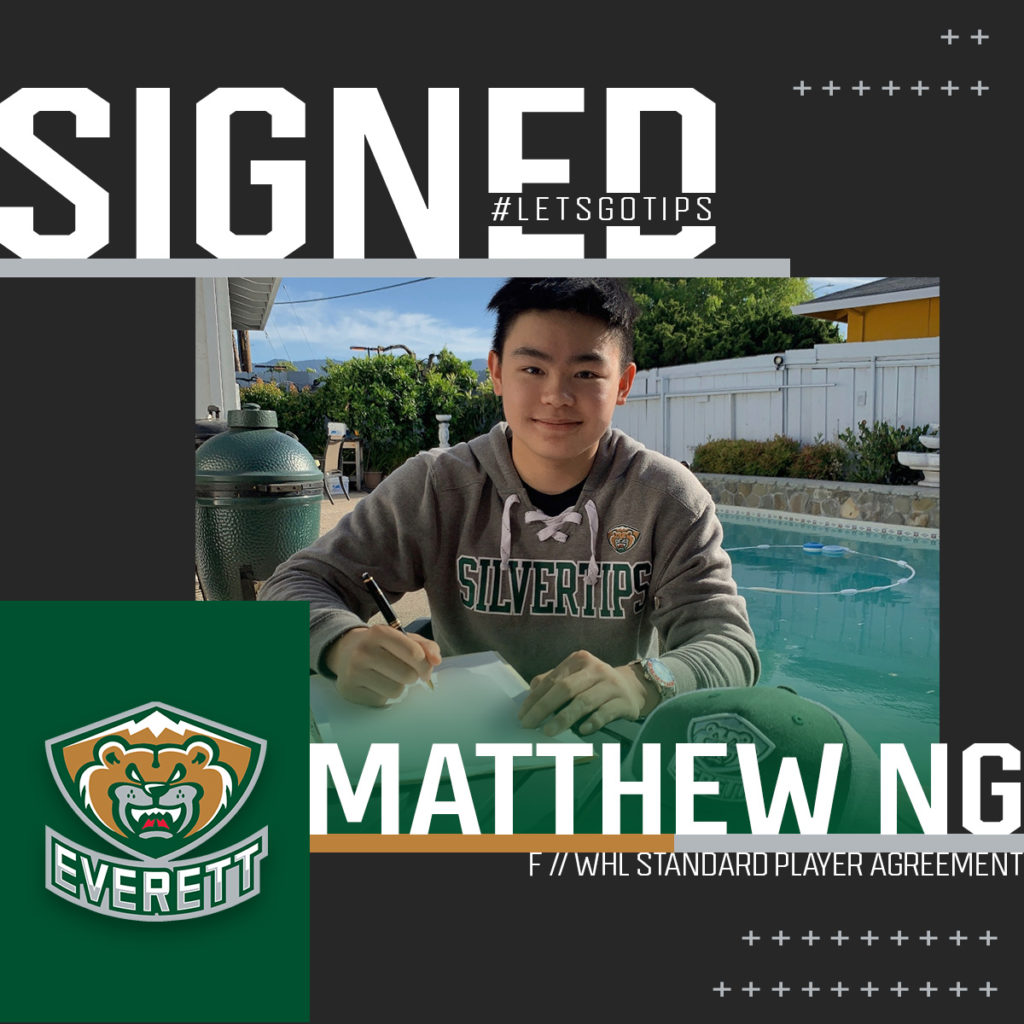 EVERETT, WA – The Everett Silvertips, seven time U.S. Division champions of the Western Hockey League, and general manager Garry Davidson announced today that forward and U.S. born prospect Matthew Ng (“ING”) has signed a WHL standard player agreement with the Silvertips. By signing a WHL Standard Player Agreement, Ng is guaranteed a WHL Scholarship for every year he plays in the WHL.

“Matthew has continued to develop as a gifted two-way forward everywhere he has gone, and it makes us thrilled for his commitment to the Everett Silvertips and the Western Hockey League,” said Davidson. “His versatility and quickness have laid a foundation for potential success, and fit our style of play. The San Jose Junior Sharks and Culver Academy have done a terrific job with preparing future talent and Matthew’s progress from both programs speaks volumes to the growth of our game across the country. He’s an example of United States born prospects who continue to understand and choose the vast benefits of competing in our league. We welcome Matthew to the Silvertips family, and look forward to his arrival in training camp.”

Ng, a 2004-born forward, competed at the midget level this past season for Culver Military Academy ranking third on the U16 program with 36 points (11g-25a) in 36 games, also leading the club with 25 assists and earning a +31 ranking.

The native of Cupertino, Calif. was selected by the Silvertips in the fifth round (100th overall) of the 2019 WHL Draft and skated for two seasons across bantam levels with the San Jose Junior Sharks, ranking second at the U14 AAA level with 49 points (25g-24a) and 25 goals in 34 games in 2018-19, and leading the Sharks for T1EBHL play that season with 17 points (8g-9a) in 12 games.

“Matthew is a talented forward who I believe will develop into a top line player in the Western Hockey League as he matures,” said Silvertips director of player personnel Alvin Backus. “He’s intelligent, possesses very good puck skills, and skating ability. He plays the game with passion and conviction, and should strongly complement our other 2004-born draft picks. Together they will supply high-level offense as they gain experience.”

“It’s an amazing honor and opportunity to join a great organization in the Everett Silvertips, and I can’t wait to get started,” said Ng. “They’ve delivered results and play in a place that’s brought an excellent experience, including last training camp from general manager Garry Davidson, the staff, elite facilities, fans, and players who made me feel very welcome. The last time I visited a rink that nice was the home of the San Jose Sharks, and receiving feedback from people like Dustin Wolf to a former NHL and WHL player in Curtis Brown, within the Junior Sharks program helped me understand why this move made sense. I am very grateful for my parents Taney and Cindy, sister Jessica, teammates, coaches, and friends who gave relentless support to make this day possible and look forward to bringing a fast, shifty game that can generate chances in the offensive zone, while helping maintain responsibility at the other end of the ice.”

Ng is the fourth player from the Silvertips 2019 draft class to be signed to a WHL standard player agreement, while the Silvertips have signed their first three selections: Ng, and forwards Ben Hemmerling and Austin Roest.

This past season, the Silvertips led the WHL with 46 wins and suited up eight players born in the United States, including four from Washington (Wyatte Wylie, Dawson Butt, Brendan Lee, Hunter Campbell). Ng joins Wolf as two players signed by the Silvertips originally from California.