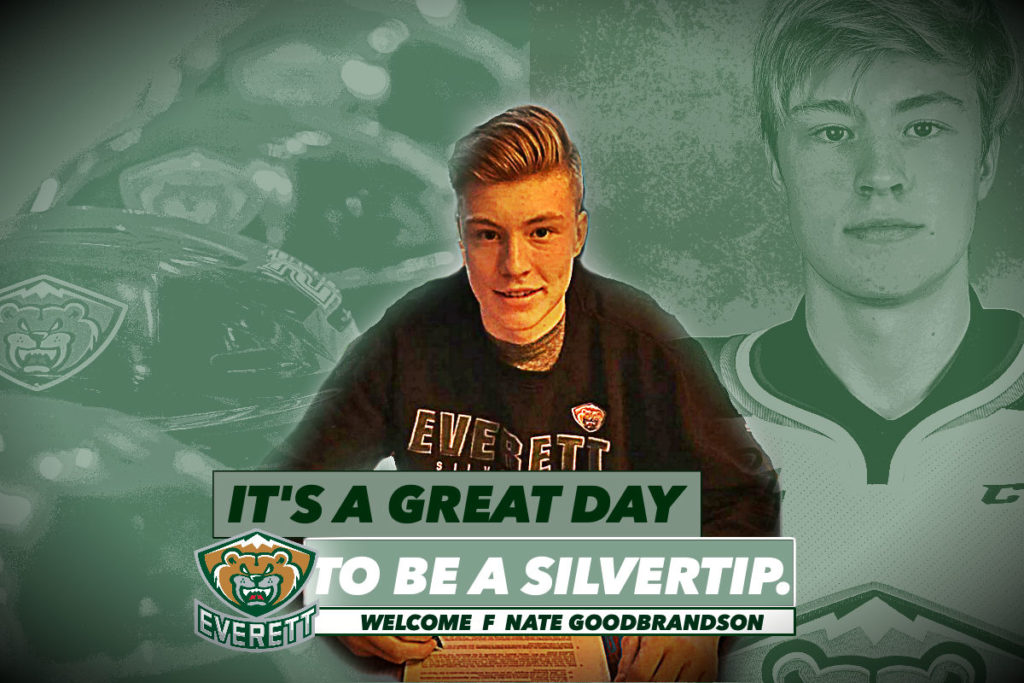 “Nate Goodbrandson has made valuable strides this season with his game and we’re excited he has chosen to commit to our program,” said Davidson. “We’ve had several opportunities to observe his game up close this season and he’s left a remarkable impression with his on ice abilities. We are looking forward to his continued development this season with Jim Berezowski, Mark Olafson, Darcy Delyea and the Winnipeg Thrashers program, and preparations for his first full eligible season next year.”

Goodbrandson, a 2003-born forward, is third in points (18) with the Winnipeg Thrashers (MMHL) in 17 games, and is third in assists (10). The 6-foot, 160-pound forward was selected by the Silvertips in the seventh round of the 2018 WHL Draft, skated with the Tips in training camp, and this season has also compiled four multi point games. His current season high stands as a four point effort, earning a goal and three assists, on Oct. 27 in a 6-3 win over Norman.

“When it comes to raw, natural abilities, scoring is what Nate Goodbrandson is all about,” said Silvertips Manitoba senior scout Doug Sinclair. “He plays a confident game with an ability to elevate the play of his line linemates with a high amount of playmaking IQ and vision. Since leaving camp, he’s stronger, quicker, and has just begun to fill into a frame with more room to grow. We love the fact he comes from a program that prides itself on work ethic, which establishes good habits for his future.”

Last season, the native of St. Andrews, Manitoba was second on the Winnipeg Hawks (WBAAA) and in the league with 77 points in 34 games, also ranking second in goals (31). He had 15 points in eight postseason games, helping the Hawks earn the league title.

“It means so much to be an Everett Silvertip and I’m grateful for the friends, family, coaches, and teammates who have helped me work hard to reach this kind of an opportunity,” said Goodbrandson. “I’m looking forward to meeting new teammates, making new friendships in a world class league like the WHL, playing in front of crowds that are so big and energizing in Everett, and continue working on preparations to be ready for the first season of WHL eligibility.”

By signing a WHL Standard Player Agreement, Goodbrandson is guaranteed a WHL Scholarship for every year he plays in the WHL. A player is able to attend any career enhancing institution of his choice, including universities, colleges, technical institutes, trade schools, or any other institution which will help the player achieve his academic and career goals. For each season played in the WHL, a player receives a one-year post-secondary scholarship, which includes: Tuition, Compulsory Fees and Required Textbooks.

The U.S. Division leading Silvertips will visit the Portland Winterhawks on Friday at Memorial Coliseum, 7:00 in Portland (1380 AM / 95.3 FM / Tips App / WHL Live). The Tips return home against Vancouver on Saturday, a battle between the top two teams in the Western Conference, at 7:05 p.m. Tickets are available at www.everettsilvertips.com/tickets.