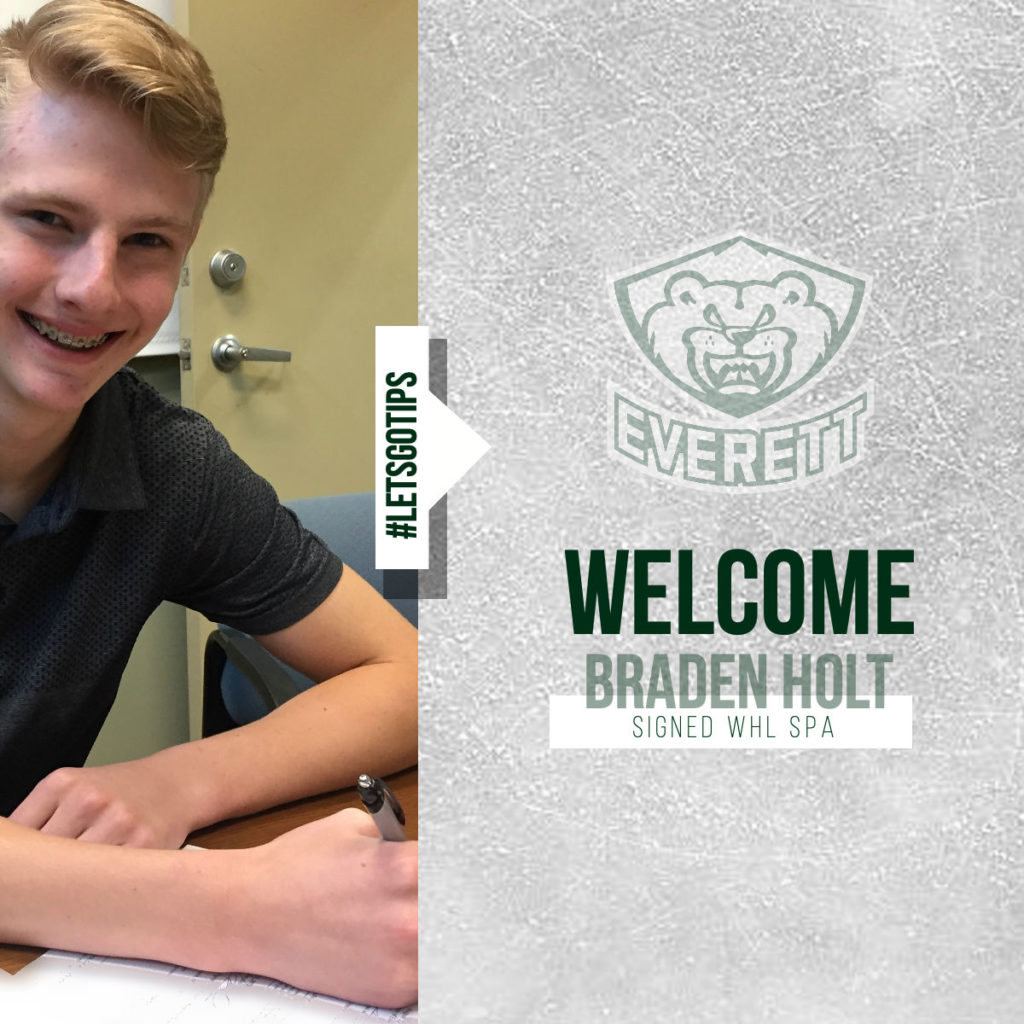 EVERETT, Wash. – The Everett Silvertips (@WHLSilvertips), seven time U.S. Division champion and two-time Western Conference champion of the Western Hockey League, and general manager Garry Davidson announced today that the club has signed U.S. born prospect goaltender Braden Holt to a WHL Standard Player Agreement. Holt is immediately eligible to suit on the Silvertips roster as a 2003-born draft selection, and by signing his WHL Standard Player Agreement is guaranteed a WHL Scholarship for every year he plays in the WHL.

“Braden has grown into an exceptional goaltending prospect and we’re extremely excited for his decision to join the Everett Silvertips family and make the Western Hockey League the next step of his career,” said Davidson. “After the progress he made in the last year, getting him fully prepared to become a Silvertip became a very high priority and our hockey staff did an incredible job educating him on the benefits our league and program have to offer. With his talent and well-rounded game, the sky’s the limit. We look forward his contributions as he continues to develop.”

“Braden’s a gifted goaltender who’s taken big strides since camp last year and grew quite a bit, which adds to a nice range that he possesses,” said Silvertips head scout Mike Fraser. “We were really impressed with how he performed and demonstrated significant improvement with his feet and quickness. Once our conversations with him and family developed, they were really excited to be involved in the Silvertips family and we’re very excited to have him. Everett has grown a big history with successful goaltenders. We’re positive he’ll fit in quite well.”

Holt, a 6-foot-2 goaltender who turned 16 in July, was fourth in the High Performance Hockey League with a 2.52 goals-against-average and was fifth with a .917 save percentage, recording a 5-2 record in 10 games with the Honeybaked (Midget 15U) program last season. He recorded five games of allowing just one goal, and a season high 38 saves on Oct. 21 in a 6-1 victory over Team Illinois. In July, Holt was selected by USA Hockey as a participant in the 2019 Boys Select 16 Player Development camp, presenting the top 2003-born U.S. players.

The native of Bozeman, MT was a part of Victory Honda’s (Bantam Major AAA) T1EBHL championship in 2017-18, and logged a 3.30 goals-against-average and .852 save percentage in six regular season appearances. Holt was the lone goaltender selected by the Silvertips in the 2018 WHL Draft, in the 12th round (262nd overall).

“It means everything to be an Everett Silvertip,” said Holt. “It’s a big part of the next step of my career and I can’t be more excited to get started. Everything about Everett influenced the decision to come here: the coaching, teammates, organization, and more – I light up every time I come here. It makes me look forward to contributing on the ice and in the community with the fans here. I owe so much to my coaches, family, and friends who’ve always been with support to reach the next level and push you to where you need to be.”