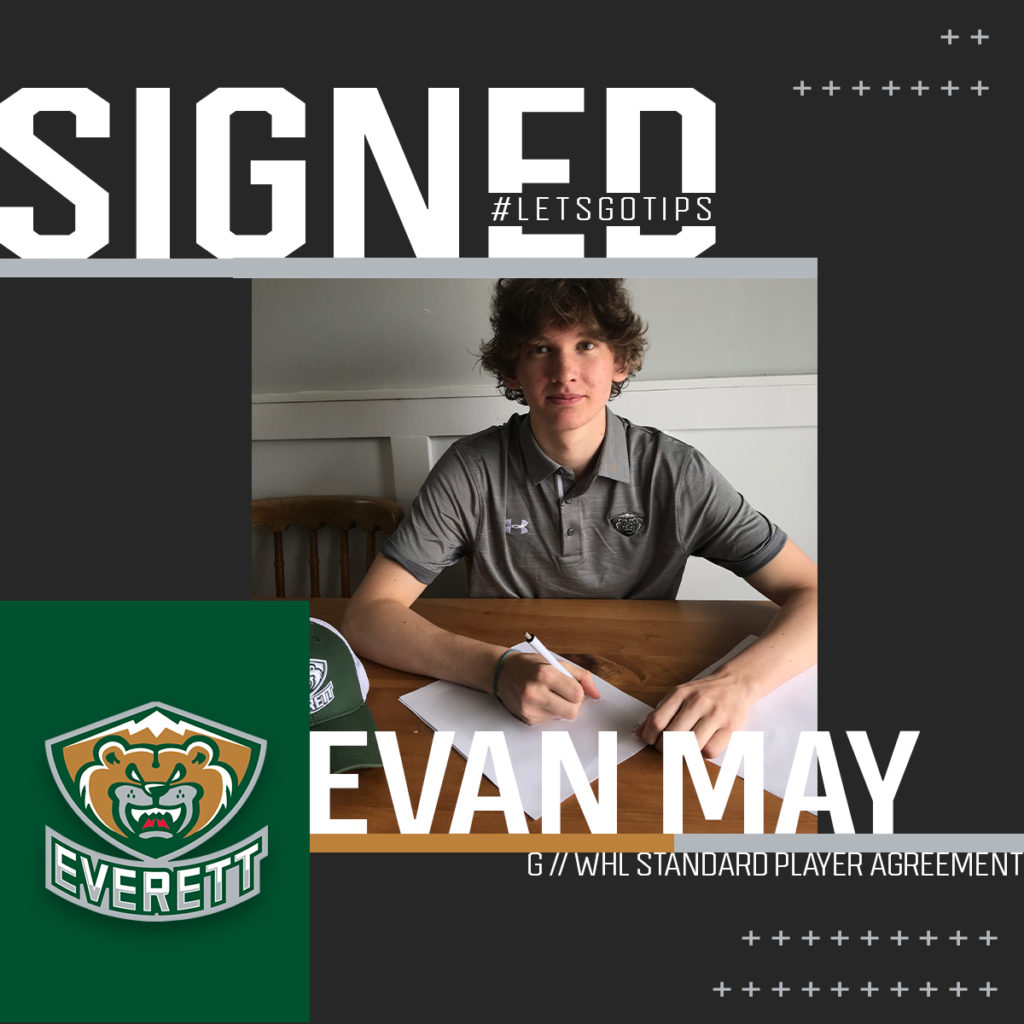 EVERETT, WA – The Everett Silvertips, proud seven-time U.S. Division champion and two time Western Conference champion of the Western Hockey League, and general manager Garry Davidson announced today that prospect and 2004-born goaltender Evan May has signed a WHL Standard Player Agreement. By signing a WHL Standard Player Agreement, May is guaranteed a WHL Scholarship for every year he plays in the WHL.

“Evan has worked extremely hard for this day to be possible and demonstrates terrific qualities that we see in a goaltender who can make an impact in our organization,” said Davidson. “For a young goaltender just months off the WHL Bantam Draft, he was excellent in training camp and showed poise and precision beyond his years. He took that experience and let it drive his game for the entire year with the North Island program. We look forward to his continued development and seeing him in training camp for the upcoming season.”

“I’m extremely excited to become a Silvertip and take advantage of an amazing opportunity to elevate my game,” said May. “This is such a competitive program with a great track record of developing so many strong goalies. Last season’s training camp experience did so much to fuel my confidence. I thank my Mom, Dad, and every coach that has helped me achieve the goals that were established. I’m looking forward to bringing a calm, efficient, and technical based game to downtown Everett, and I will make every effort to work hard and be ready to make an impact.”

May suited up in 2019-20 for the North Island Silvertips U18 AAA program (BCMML), posting a 3.59 goals-against-average and a pair of shutouts in 20 games, along with a 7-11-2 record while splitting 40 starts last season with Joshua Doherty.

The 6-foot, 155-pound netminder earned his first shutout of the season on Dec. 7, a 3-0 victory over Kootenay on Dec. 7 and followed up with a 2-0 shutout victory on Feb. 15 over the Valley West Giants.

“Evan is a goaltender with a very stoic and calculated approach, along with an insatiable appetite for stopping pucks,” said Silvertips British Columbia scout Zed Malenica. “Any free time, he’s using it to go back in net to take extra shots and maximizing his time as an opportunity to develop. He’s developing as a technically sound, intelligent, and agile goaltender who covers the net well, and moves post-to-post quickly. He’s a great addition to our organization and with continued work at his skill set, he’ll be in position to make a great impact.”

The native of Nanaimo, British Columbia suited up for Team Grey at the Silvertips 2019-20 Prospects Game, a 6-1 win over Team Green on Aug. 24 at A.O.T.W. Arena and was selected by the Silvertips in the 11th round (240th overall) of the 2019 WHL Draft. He previously suited up for the Nanaimo Clippers at the Bantam T1 level.

The Silvertips have five players, including their first three selections, from the 2019 WHL Draft signed to WHL Standard Player Agreements: