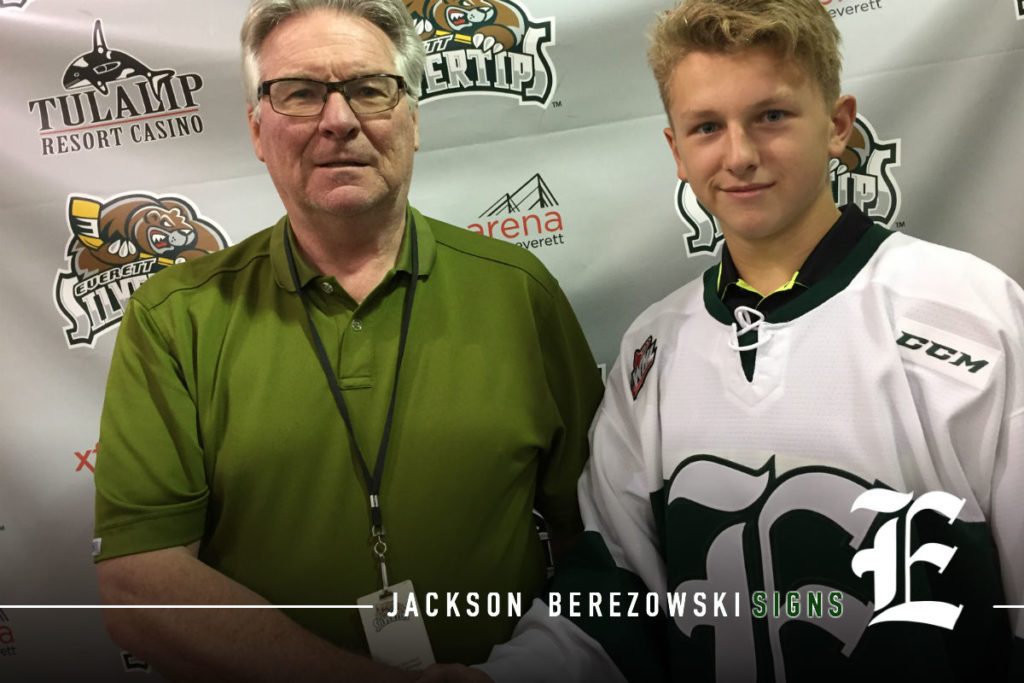 Berezowski, a 2002-born forward, skated with the Silvertips in 2017-18 training camp and was the team’s second pick in the 2017 WHL Draft, selected in the second round (44th overall).

“Jackson’s offensive credentials and proven ability made his signing a high priority,” said Davidson. “We’re excited to have him officially as a Silvertip. He’s a terrific individual with a great attitude and enthusiasm for the game. We’re expecting his time in Yorkton, this season, to be extremely productive and provide him the experience to make the step to Western Hockey League in the very near future.”

“Jackson is an exciting forward who can play with talented players and wasn’t intimidated when on the ice with older players in our camp,” said Silvertips director of player personnel Bil La Forge. “He’s a very smart player with advanced offensive instincts, and finds a way to score big goals. His strength puts him at a big advantage to dictate space in high traffic areas. He’s an individual with great character and we look forward to him being a part of our future.”

Officially a Silvertip, and couldn't be more excited! Can't wait for the future! 🐻

Berezowski took the league scoring title at the Saskatchewan Bantam AA level in 2016-17 with 87 points (41g-46a) in 30 games and was fourth in league goal scoring (41) with the Yorkton Terriers, a 57-point increase he manufactured after helping guide the Terriers to a league title (SBAAHL) the previous season.

The native of Yorkton, Saskatchewan had seven hat tricks, 15 multi goal games, and 27 multi point games throughout last season, twice earning a seven-point game with Yorkton. In the playoffs, Berezowski logged a point in every game, one hat trick, three multi-goal games, and a total of 17 points in five postseason games.

“It’s amazing to realize this day has happened and be a part of the Everett Silvertips,” said Berezowski. “It’s a dream come true in a great place to play, and with terrific players who were extremely helpful during training camp. I take pride in a two-way game, helping in my own end, and being counted on as a guy to produce offensively. I can’t wait to get started.”