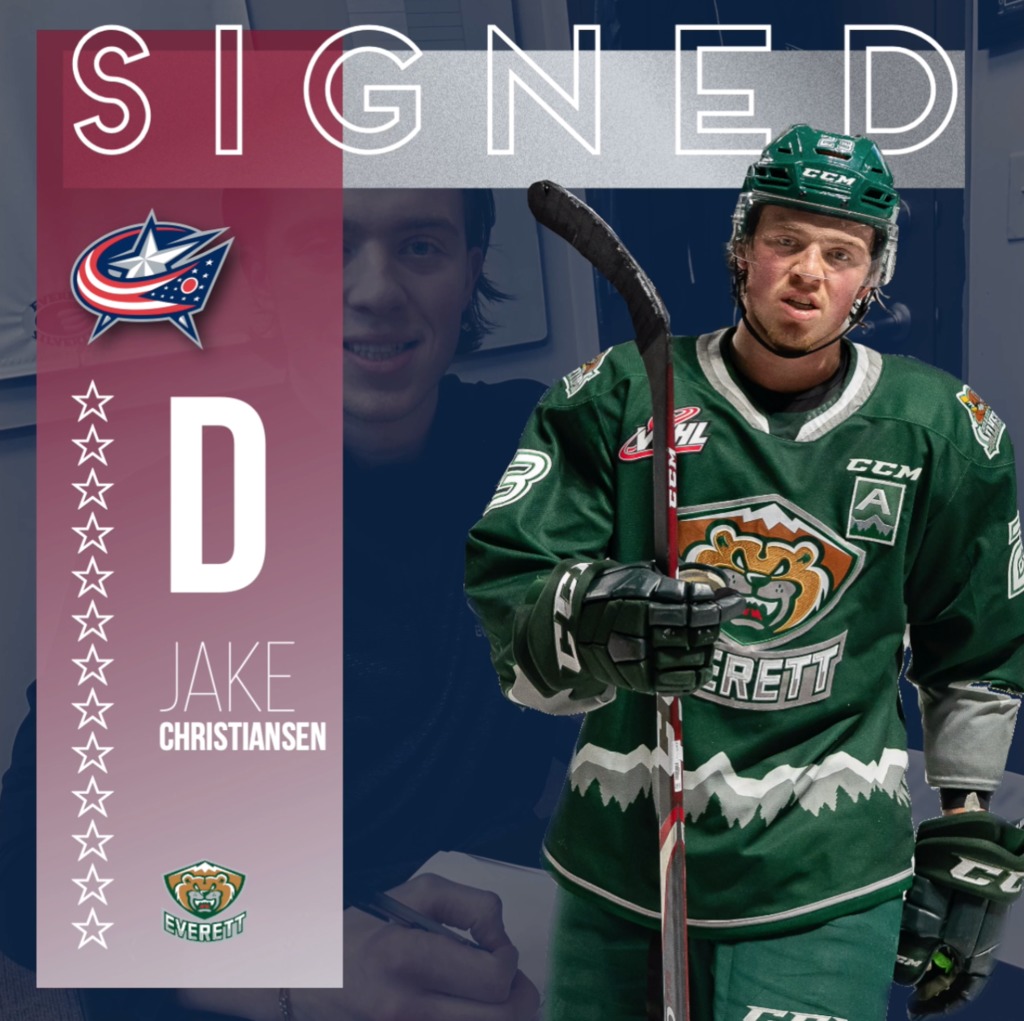 “Today celebrates hard work for Jake Christiansen and the successful process for him,” said Silvertips general manager Garry Davidson. “Starting as a 16-year old defenseman in this league over four years ago, he never wavered from making consistent and incremental improvements to his game and our coaching staff deserves a ton of credit for the work they put into him. It’s an endorsement of what our program represents with player development. He’s had an outstanding overage season and been rewarded for all that he’s invested in as a Silvertip. We look forward to Jake’s contributions in finishing his final WHL season, and look forward to his future accomplishments in the Columbus organization.”

Christiansen, 20, leads WHL defensemen with 20 goals and is ninth among all league blueliners with 47 points (20g-27a) in only 35 games – establishing new career highs in goals, assists, and points – returning to the Silvertips for his overage season on Dec. 5 after starting the season with the Stockton Heat of the American Hockey League on an amateur tryout offer, suiting up in nine AHL games.

The 6-foot-1, 195-pound defenseman has previously skated with the St. Louis Blues and Calgary Flames in development and training camps, and has 149 points (48g-101a) in 294 career WHL games with the Silvertips while helping guide the club to three consecutive U.S. Division titles and skating with the Silvertips in 2017-18 as a member of their Western Conference championship squad.

The West Vancouver, British Columbia native has 17 points (3g-14a) in 51 career WHL Playoff games and last season earned eight points in 10 postseason games. This year, Christiansen became the first defenseman in Silvertips history to reach the 20-goal plateau and in franchise history among defensemen, is 1st in goals (48), 3rd in assists (101), tied for 2nd in points (149), and 2nd in games (294).

“I’m so excited for an incredible opportunity with the Columbus Blue Jackets,” said Christiansen. “Leading up to this day, it became clear the Blue Jackets offered a second-to-none chance for development as a professional hockey player. There are so many people I am grateful for, helping make this day possible, and helping open doors to this day. Silvertips general manager Garry Davidson brought me here and believed in me. Head coach Dennis Williams has been so important helping develop me as a player and individual since he arrived three years ago. My teammates, billets and Silvertips fans have helped make downtown Everett a ‘home away from home,’ and they’re an example of why this organization is elite when it comes to an experience. My personal training staff and skating coaches at Level 10 in Vancouver continued to push me during the offseasons. My minor hockey association, the Hollyburn Huskies, provided the tools to reach the WHL level. Most importantly – my family – including Dad, Mom, my sister Lexi, and grandparents have incredibly supportive from driving to practices, supplying resources to attend hockey camps, and merely providing the advice to keep pushing. For all of them, I am grateful, and am excited to keep working off their contributions into this postseason with the Silvertips, and in the future with the Blue Jackets organization.”

Christiansen was originally selected by the Silvertips in the fifth round (105th overall) in the 2014 WHL Draft.