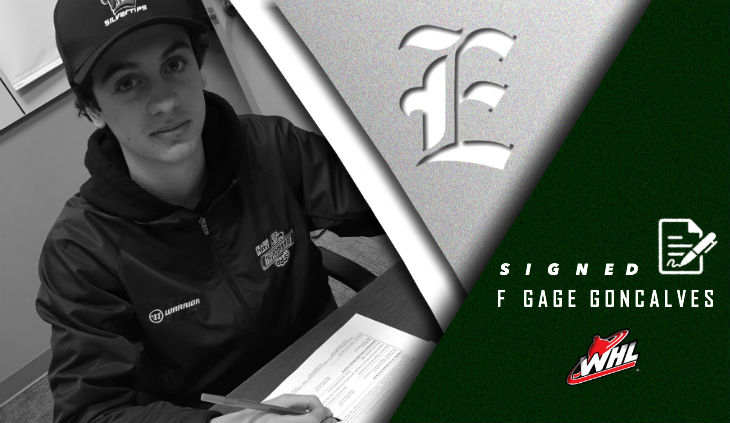 “Gage is a player who has embarked on a fast track of development over the past year,” said Davidson. “We’re extremely excited to add him as a committed player to our program and give him an opportunity to continue his growth. Our scouting staff, led by Bil La Forge, deserves a ton of credit for discovering and tracking Gage’s progress. He’s got the potential to be a great addition and he’ll be available to join us during this season as an affiliated player.”

Goncalves, a 2001-born forward, joins the Silvertips active roster as an “AP category” player, previously as a listed player, and a past participant with the Silvertips in training camp. As a teammate of Silvertips signed prospect and defenseman Dylan Anderson, he leads the Fraser Valley Thunderbirds (BCMML) and is third in league scoring with 47 points in 24 games.

Goncalves’ 17 goals and 30 assists also pace Fraser Valley and are fifth among the league in goals and third among the league in assists. The Mission, British Columbia native also has a goal and an assist in four games with the Chilliwack Chiefs (BCHL) this season. He has registered four points or more in a game four times this season, and buried a season high five goals on Nov. 12 vs. Cariboo.

“Gage is an offensive minded player who demonstrates excellent skating ability and willingness to pressure the puck all over the ice,” said La Forge. “In several areas he may remind Silvertips fans of Carson Stadnyk. He’s had our attention going back to the bantam level and was a player we were very interested in, heading into the 2016 draft. His visits to two straight training camps made an impression and it’s no surprise he’s begun to take off as a player. He embraces the mentality of playing much bigger than his size and his willingness to go into the dirty areas is a terrific supplement for his raw skill.”

That offense from BC includes 47 points in 24 games this year.

A product of the Yale Hockey Academy program, he was third in scoring with the Elite15s club (CSSHL E15) last season with 30 points in 30 games, while pacing Yale with 17 assists and additionally adding an assist in three playoff games.

The Tips return to play on Friday, Jan. 5 at Save-On-Foods Memorial Centre to visit the Victoria Royals at 7:05 p.m. (Fox Sports 1380 / FM 95.3). The Tips return home the next evening and host the Portland Winterhawks at 7:05 p.m. Tickets are on sale at www.everettsilvertips.com/tickets.