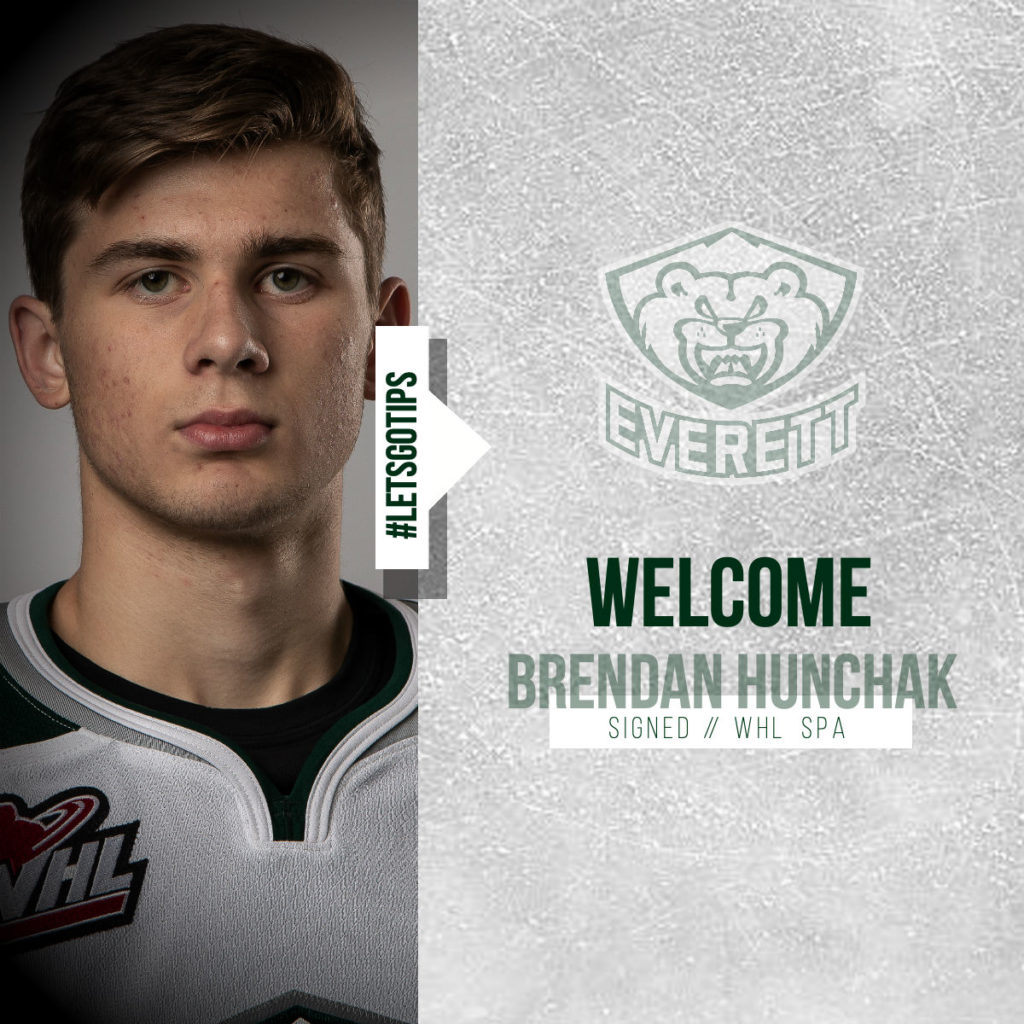 “Brendan caught our attention with an outstanding training camp and since that time has stepped up his game at the major midget level,” said Davidson. “He’s put in the hard work required to make this day possible and he’s earned an opportunity to make an impact within our forward group next season. HIs background in the game set him up with terrific hockey sense and work ethic, and we’re proud to welcome Brendan formally to the Silvertips family.”

Hunchak, 17, is fifth on the Thompson Blazers (BCMML) with 16 points (5g-11a) in 32 games, and is tied fifth on the club in assists (11). The 6-foot, 150 pound forward earned a goal in three games last season for the Blazers, and also was second on Thompson’s minor midget club with 41 points (19g-22a) in 27 games, along with earning five points in six postseason games and BCMIML Player of the Month honors in November.

The native of Kamloops, British Columbia was also second on the Blazers BCMIML club last season with 22 assists and was tied for second with three playoff assists.

“Energy and competitive are two words that come to mind when describing Brendan’s game,” said Silvertips director of player personnel Alvin Backus. “He’s a rangy forward who projects to develop significantly in size, skates well, is coachable, and carries the attitude of a complete ’team first’ kind of player. He’s got an opportunity to become a must-see player because of how relentless he plays every game. He’ll do whatever it takes.”

Hunchak appeared in training camp with the Silvertips this season and earned a spot in the lineup at the Tips annual Green vs. Grey Game, concluding Phase One the training camp period.

“It’s an awesome feeling to sign with an organization as great as the Everett Silvertips and I’m absolutely pumped to begin the journey as a WHL player with them,” said Hunchak. “They deliver a first class experience from training camp, to the staff, dressing room culture, and environment. I’ve never experienced a better place to play. Going back to last August, players like Bryce Kindopp, Jackson Berezowski, and even a longtime friend in mine, Aidan Sutter gave really good advice on what next steps to take this season and they’ve made a big difference.”

Hunchak’s father, Dave, worked ten seasons in the WHL on the coaching staffs of the Swift Current Broncos, Moose Jaw Warriors, and Kamloops Blazers from 2004-14 and carries five seasons of head coaching experience in Moose Jaw (2007-11) and Kamloops (2013-14). On staff as a coach, he helped Team Canada earn the gold medal at the World Junior Championships in 2005-06 and also served Hockey Canada for three seasons as a coach at the U18 and U20 levels.

“Being around my father on a day-to-day basis made a big impact on making this day possible: he laid the road map out for what hard work and dedication can do, and I’m forever grateful for his advice,” said Hunchak. “Great players from my time growing up, like Dale Weise and Travis Hamonic, were invaluable for advice. I’m thankful for their time, and the role they played for encouragement.”

UP NEXT: Everett hits the road for three games in three nights next week but will return home for Feb. 14 when they take on the Seattle Thunderbirds at 7:35pm. It’s Union Solidarity Night and Hockey Happy Hour, which means that fans can save $15 with a ticket/drink combo pack. The Tips return to play Friday, Feb. 7 at Tri-City, opening at 7:05 p.m. (KRKO / Tips App).