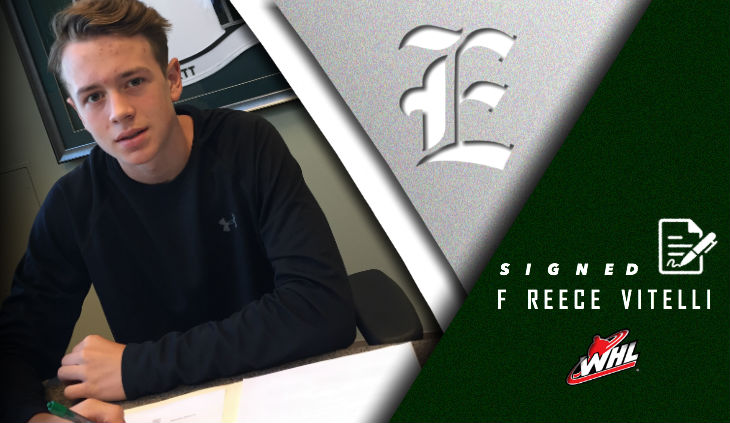 “Reece demonstrated outstanding qualities that drew plenty of attention during phase one of training camp,” said Davidson. “He has shown commitment to a 200-foot game and was offensively reliable during the playoffs, last season in Winnipeg. It brings great excitement to welcome Reece to the Silvertips family and we are proud of his decision to choose the Western Hockey League as his next step of development.”

Vitelli, a 2001-born forward, posted 28 points (9g-19a) in 36 games last season with the Winnipeg Wild (MMHL) and earned a hat trick on Nov. 26. Among his teammates, Vitelli was tied for fourth in playoff scoring with nine points (3g-6a) in 11 games and he earned points in six of the first seven postseason games as the Wild captured the league championship.

The native of Winnipeg, Manitoba was selected by the Silvertips in the fourth round (83rd overall) of the 2016 WHL Draft. In 2015-16 he led the Winnipeg Warriors (WBAAA) and was tenth in league scoring with 69 points (32g-37a) in 34 games. He added eight points in nine postseason games.

“Reece showed tremendous confidence every time he was on the ice and used his speed effectively to be first on pucks, make plays, and be reliable at both ends of the ice,” said Silvertips director of player personnel Bil La Forge. “We’ve always admired his skating and skill level. But his compete level has taken him to a higher level and never had him finish second on loose pucks. We love those qualities in his game.”