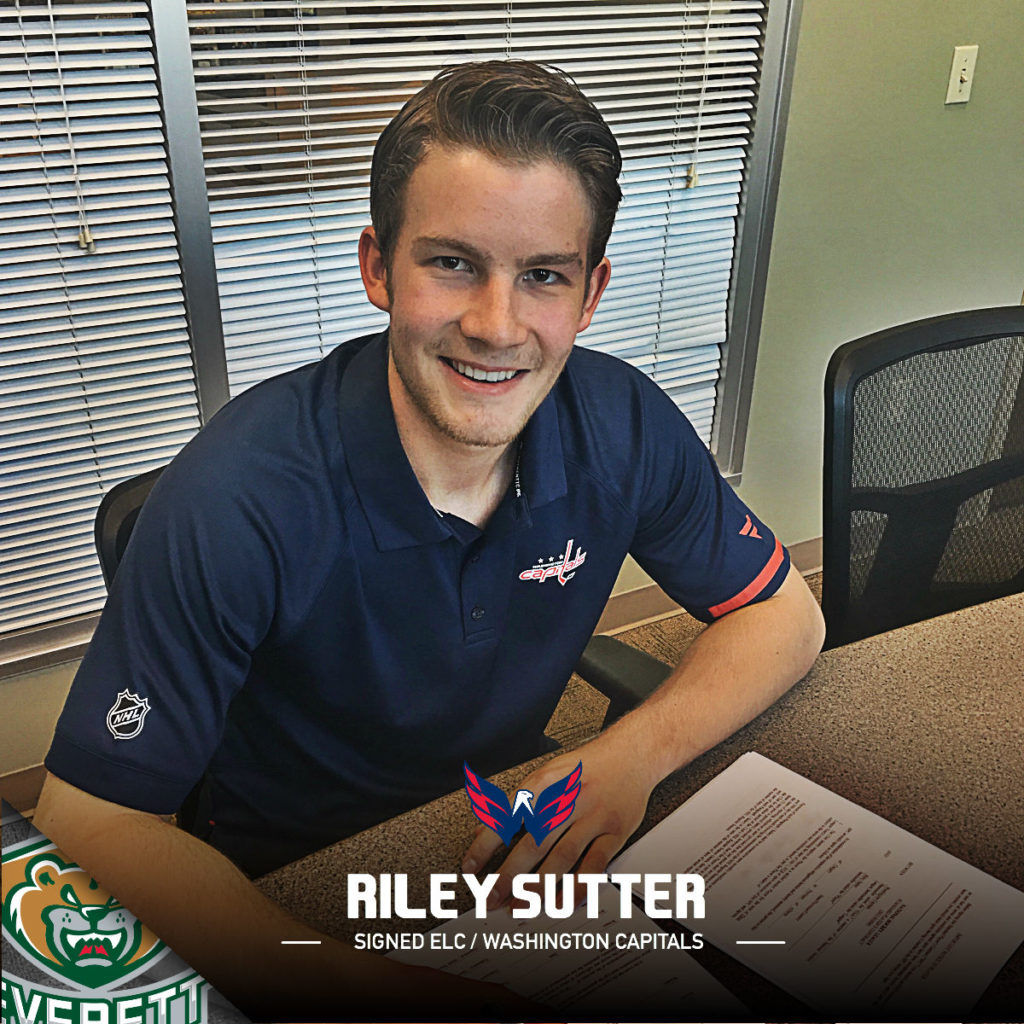 EVERETT, Wash. – Everett Silvertips (@WHLSilvertips) center Riley Sutter has signed a three-year, entry-level contract with the Washington Capitals of the National Hockey League. Sutter’s contract will carry an average annual value of $817,500. Sutter will continue to skate with the Silvertips, and was selected by the Capitals in the third round (93rd overall) of the 2018 NHL Entry Draft.

Sutter, a late 99-born forward has 46 goals and 98 points in 169 career WHL games, also all with the Silvertips. This season, Sutter has a pair of assists in his first three games and skated in the preseason with the Capitals during training camp, leading the club in goals (3) and tied for first in points (5) during the 2018 Prospect Showcase in Florida.

The 6-foot-3, 210 pound center made his NHL preseason debut against the Boston Bruins on Sept. 18 at TD Garden and last season earned a career high 25 goals and 53 points in 68 WHL games, helping guide the Silvertips to the Western Conference title and sixth U.S. Division title. He went 52.4 percent at the face-off circle (715 of 1,364) last season and his five game winning goals were tied for fourth on the Silvertips.

Named Silvertips assistant captain for the 2018-19 season, his +17 rating was tied for third in the WHL Playoffs and he earned 19 points (9g-10a) in 21 postseason games, also leading the Silvertips in playoff game winning goals (3).

Sutter had five multi point games in the playoffs and tied for the Silvertips lead in points (5) in the Rogers WHL Championship Series against Swift Current. During regular season play, he was one of four Silvertips to earn a hat trick and his career high five point game (4g-1a) on Dec. 27 included four goals, tying the franchise record for most goals in a game.

The Silvertips return to play tonight, visiting the Tri-City Americans at 7:05 p.m. (1380 AM / 95.3 FM / Tips App / WHL Live). The next Silvertips home game is Pink The Rink on Friday, Oct. 5 against the visiting Seattle Thunderbirds, 7:35 p.m. in downtown Everett. Tickets are on sale at www.everettsilvertips.com/pinktherink