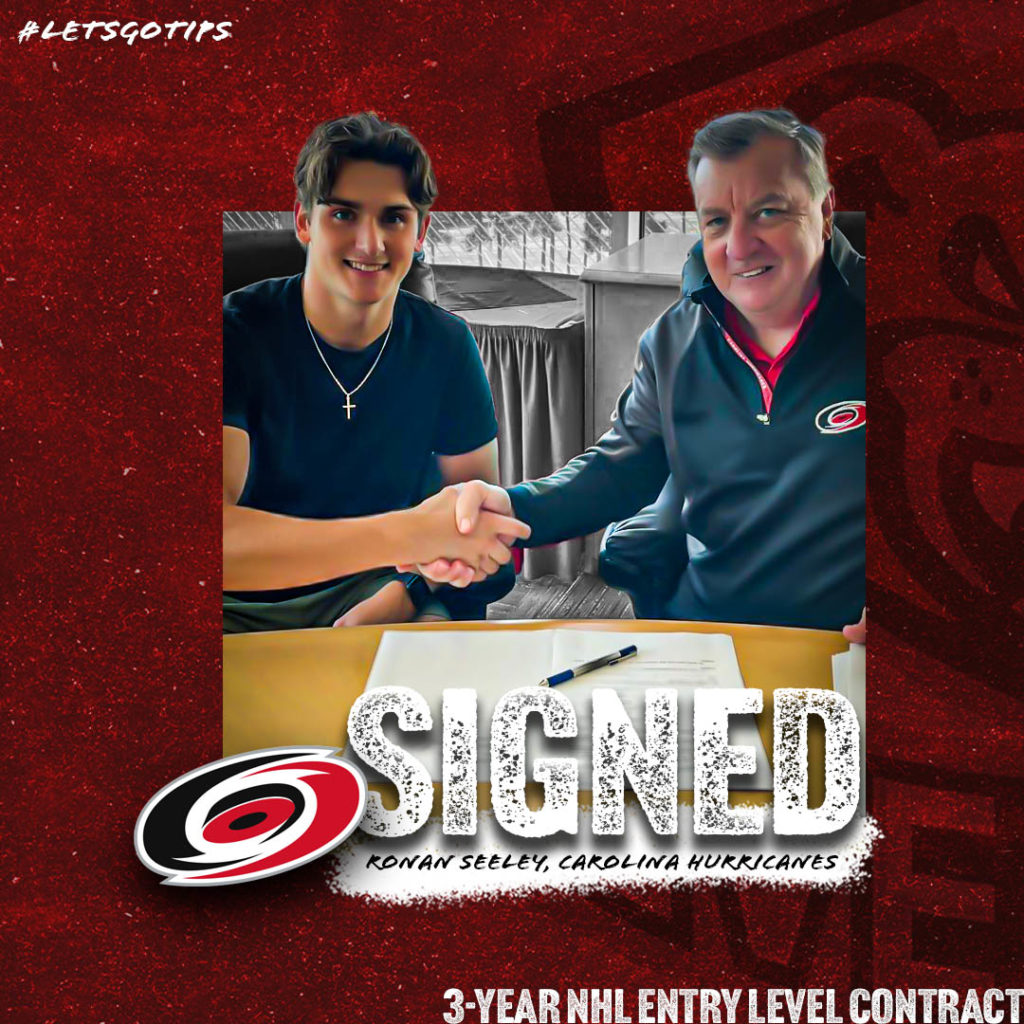 “Ronan is an extremely driven player who’s made a huge impact on the fortunes of our program over the last three years, and his dedication has paid off with a big reward for his future,” said Silvertips general manager and head coach Dennis Williams. “We’re all extremely proud of his opportunity ahead. It’s not just his high-end skill that made this milestone possible. It’s his commitment and determination to becoming a better player, as well as being a great leader and teammate. We’re looking forward to continuing his development and prepare him for his path ahead.”

“Signing with the Carolina Hurricanes is a step in my career and life that I will never forget,” said Seeley. “I’m truly grateful for everybody who have helped make this possible – my teammates, our coaching staff, and without question my family. They have been a bedrock of support that’s vital to guide and push you every day. A taste of NHL training camp gave more clarity on what lies ahead, and the goals within reach. I’m looking forward to working toward that, with the foundation of helping my teammates play their best in Silvertips colors this season.”

Seeley, 19, this past season tied for the Silvertips lead among defensemen with 17 points (5g-12a) in 23 games and led the entire program with a +18 rating. He earned six power play points, four power play assists, and scored a game-winning goal as part of a Silvertips team that won the U.S. Division with a 19-4 record (38 points).

The native of Olds, Alberta has 51 points (9g-49a) and a +51 rating in 138 career WHL games, all with the Silvertips, and has skated for two U.S. Division championship clubs. He has Team Canada experience at the 2018 World U17 Hockey Challenge, suiting up in five games for Canada-White. Seeley was selected by the Carolina Hurricanes in the seventh round of the 2020 NHL Entry Draft.

The 6-foot-1, 192 pound defenseman earned a career-high 32 points (3g-29a) in 63 games during 2019-20, never missing a contest while helping guide the Silvertips to within a point of the Scotty Munro Trophy for top WHL record, with the season abruptly concluded due to the coronavirus pandemic.

“Despite two shortened seasons in the WHL, Seeley’s progression has been terrific. His ability to transport the puck and play fast defensively is what we’re looking for in our defensemen,” said Hurricanes president and general manager Don Waddell. “We’re excited to watch him continue his development in our organization for another three years.”

Seeley was selected in the seventh round by the Carolina Hurricanes in the 2020 NHL Entry Draft, and named co-captain of the Silvertips for the 2021-22 season with Jackson Berezowski on Sept. 16.