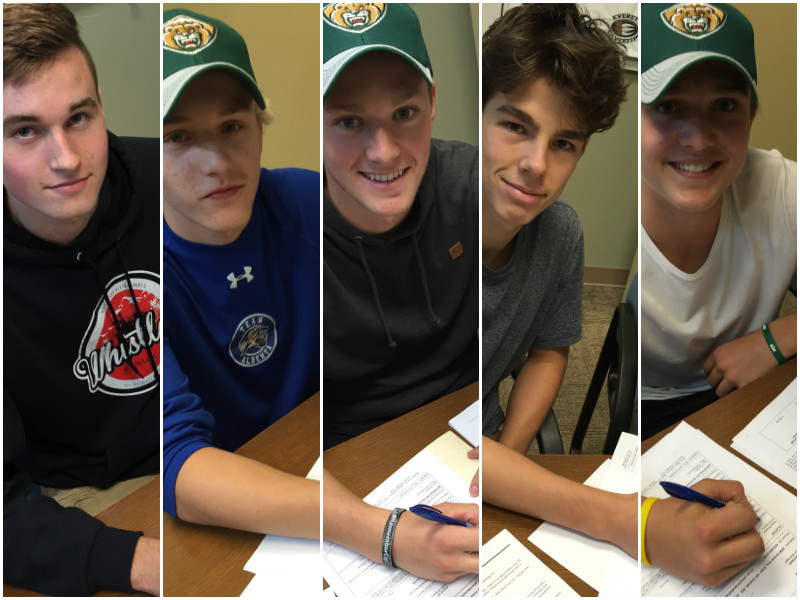 “We’re happy to welcome a pair of forwards and three defensemen formally to the Silvertip family who have demonstrated outstanding qualities,” said Davidson. “Orrin delivered spectacular results last season in Lloydminster with his Midget club while Brandson delivered a tremendous year in Winnipeg. Ian and Kyle Walker have taken the next step in their physical and skill development. Carter’s size jumps out immediately when he steps on the ice. We look forward to their continued progress and are excited they have chosen the WHL as the next step in their development.

Centazzo, a 2000-born forward, earned 53 points (30g-23a) and 34 penalty minutes in 37 games with the Lloydminster Rage Minor Midget Club (AMMHL), also posting five points in five playoff games. A silver medalist at the Western Canadian Bantam AAA championship, he additionally skated in one regular season game and a pair of playoff games with the Lloydminster Bobcats Midget AAA club, who earned an AMHL championship, and was selected by the Silvertips in the fifth round (107th overall) of the 2015 WHL Bantam Draft.

Hein, 17, was fourth in points (48) and tied for third in goals (23), skating in 33 games last season with the Winnipeg Thrashers Midget AAA club. The 5-foot-11, 180 pound forward led the Thrashers in playoff scoring with eight points in six games, additionally skating in one regular season game and earning an assist in his playoff debut with the Selkirk Steelers (MJHL).

Ian Walker, a 2000-born defenseman and native of Vancouver, was a teammate of Silvertips defenseman Gianni Fairbrother on the Burnaby Winter Club Elite 15’s last season and ranked second in scoring amongst the club’s defenseman with 17 points in 35 games, also leading all blueliners with 15 assists. He added an assist in three games with the Burnaby Winter Club Prep squad. The 6-foot-2, 170-pound defenseman was selected by the Silvertips in the third round (60th overall) of the 2015 WHL Bantam Draft.

Brown, a 98-born defenseman, suited up last season in one game with the Knights of Columbus Pats Major Midget AAA club (AMHL) and in 2013-14 earned a career-high 14 assists in 37 games with the KC Centennials Minor Midget AAA club (AMMHL). The 6-foot-5, 195-pound defenseman was originally selected by the Saskatoon Blades in the 10th round (214th overall) of the 2013 WHL Bantam Draft.

The Silvertips will open the 2016-17 schedule with a “home-and-home” series against the Vancouver Giants, launching Friday, Sept. 23 in Langley, B.C. at 7:30 p.m. followed by the Silvertips home opener against the Giants, Saturday night at 7:05 p.m. at XFINITY Arena. Single game tickets are now on sale by visiting online, the Tips App, calling (425) 252-5100 or visiting XFINITY Arena in person.