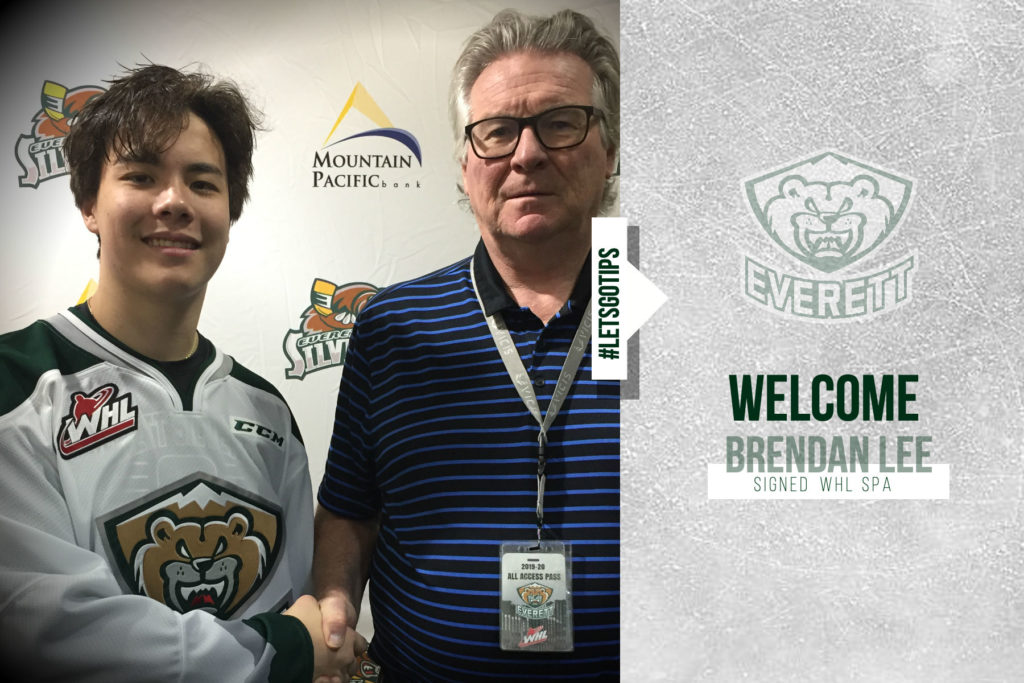 EVERETT, Wash. – The Everett Silvertips (@WHLSilvertips), seven time U.S. Division champion and two-time Western Conference champion of the Western Hockey League, and general manager Garry Davidson announced today that the club has signed U.S. born prospect forward Brendan Lee to a WHL Standard Player Agreement. Lee, a longtime resident of King County, is immediately eligible to suit on the Silvertips roster as a late 2002-born draft selection, and by signing his WHL Standard Player Agreement is guaranteed a WHL Scholarship for every year he plays in the WHL.

“Brendan is an incredible testimony to patience, work ethic, and the growth of our game in the Pacific Northwest which makes us excited for his decision to become an Everett Silvertip,” said Davidson. “He came into training camp with terrific credentials after a successful season last year with the Colorado Thunderbirds program, and was nothing short of impressive with his abilities on display with us this last week. His speed, handling of the puck, and maturity fit the needs of our program and a Seattle native, he brings a great testimony for many aspiring players in this area. We’re excited for his commitment to Western Hockey League.”

“Brendan is another guy who’s taken big strides to become prepared for the WHL, especially since his time at the bantam level,” said Silvertips head scout Mike Fraser. “He is an offensively gifted player and has potential to be a very dangerous one, moving forward. His release is great and likes to put a lot of pucks on net. He thinks the game very well offensively, and is a terrific fit for our style of play.”

During the season he collected 16 multi point games, five multi goal games, and a season high five point game (1g-4a) on Sept. 30 at Pepsi Center. The 5-foot-11, 174 pound forward also suited up for six games with the Thunderbirds U18 program, collecting a goal and two assists.

For three straight years, he has skated in USA Hockey National Player Development camps, coordinated with the top players in the country categorized by age group. Most recently with Team USA’s Selects 17 camp, he had a goal and an assist in five games.

Lee began playing hockey at age two and started suiting up with the Seattle Junior Hockey Association, competing in the program for 12 years before re-locating to compete with Okanagan Hockey Academy (Bantam Prep) in 2016-17.

“It means a lot to become an Everett Silvertip and it’s like a second home because I had been coming to games here on a regular basis since I was a kid,” said Lee. “It’s a top notch organization because of the proof of moving players onto the pros – the ultimate dream and goal for myself. I’m confident of contributing 110 percent effort every night and help put the puck in the net. The decision became an easy one, playing not too far from where I grew up and after Garry Davidson showed what kind of a great organization this is. I can’t wait to get started.”