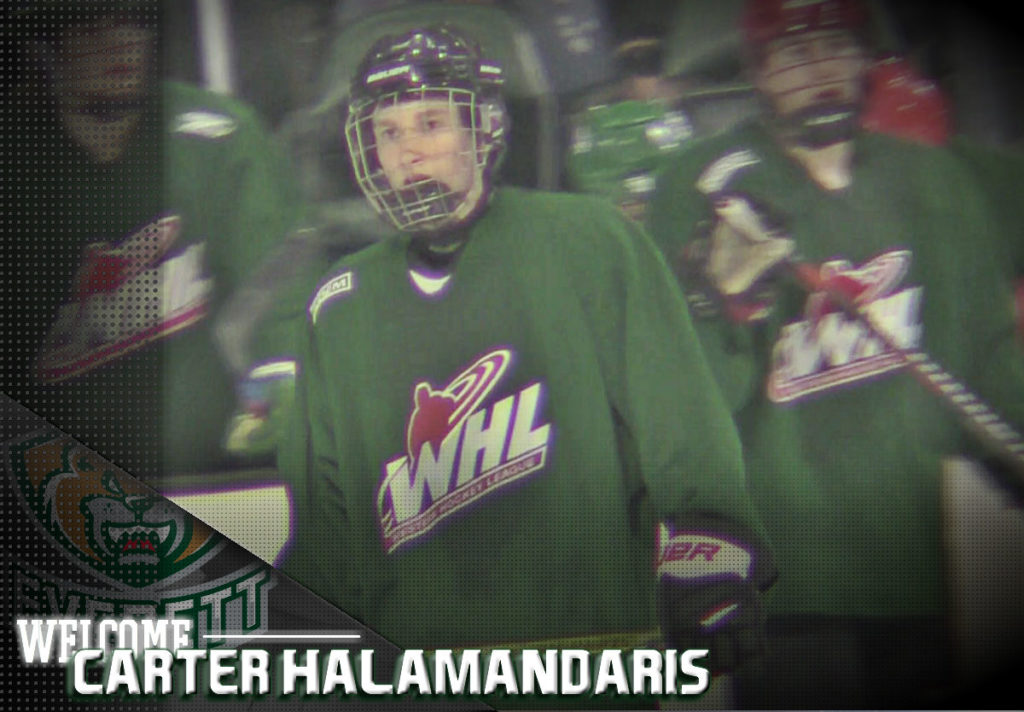 “Carter is a gifted forward who put up very impressive numbers last season, and we’re excited to learn of his decision to become a part of the Silvertips family and make the Western Hockey League the next step of his career,” said Davidson. “Every time we came back for a necessary update on Carter, the scouting reports communicated him as a consistent player who generated scoring chances and made plays nearly every shift. He demonstrated those qualities in training camp, and we’re looking forward to his continued development for his upcoming midget season, and next season in his first season of WHL eligibility.”

“When I first came to Everett with my family, I instantly fell in love with the city and organization,” said Halamandaris. “I knew from that point, I wanted to be an Everett Silvertip. I’m looking forward to the next steps ahead, and thank my friends, family, and coaches who have given their support every step of the way.”

Halamandaris was selected by the Silvertips in the fourth round (86th overall) of the 2018 WHL Draft and led the Winnipeg Monarchs (WBAAA) and 59 points in 30 games, tied for ninth across the entire league. Halamandaris had six game winning goals, three times scored the first goal of the game, and twice earned a season high five point game. He earned six points in four postseason games.

The native of Winnipeg, Manitoba had 15 multi point games and eight multi goal games, additionally earning a five-goal game on Oct. 6 vs. Parkland. Halamandaris helped the Winnipeg Monarchs (WBAAA – 2) earn a championship in 2016-17 when he had 15 points in 27 games.

Halamandaris is the third member of the Silvertips 2018 WHL Draft class to sign, joining defenseman Olen Zellweger and Ty Gibson.

By signing a WHL Standard Player Agreement, Halamandaris is guaranteed a WHL Scholarship for every year he plays in the WHL. A player is able to attend any career enhancing institution of his choice, including universities, colleges, technical institutes, trade schools, or any other institution which will help the player achieve his academic and career goals. For each season played in the WHL, a player receives a one-year post-secondary scholarship, which includes: Tuition, Compulsory Fees and Required Textbooks.

Preseason tickets for Saturday, Sept. 15 at A.O.T.W. Arena, when the Silvertips host the Seattle Thunderbirds at 7:05 p.m. are available via general admission seating at http://everettsilvertips.com/preseason. Opening the Silvertips home schedule, which covers 34 games this season at Angel of the Winds Arena, is Opening Night against the Vancouver Giants on September 22 at 7:05 p.m. All fans will also witness the raising of the Silvertips sixth U.S. Division championship banner and second Western Conference championship banner to the rafters before the opening puck drop, and the first 5,000 fans at the doors will receive a collectible Silvertips magnet schedule, presented by Lamoureux Real Estate and Sound Transit. Season Tickets and Mini-Plan Packages are available at www.everettsilvertips.com/season. Opening night for the Tips 2018-19 season is Friday, Sept. 21 at Vancouver (7:35 p.m., 1380 AM / 95.3 FM KRKO).