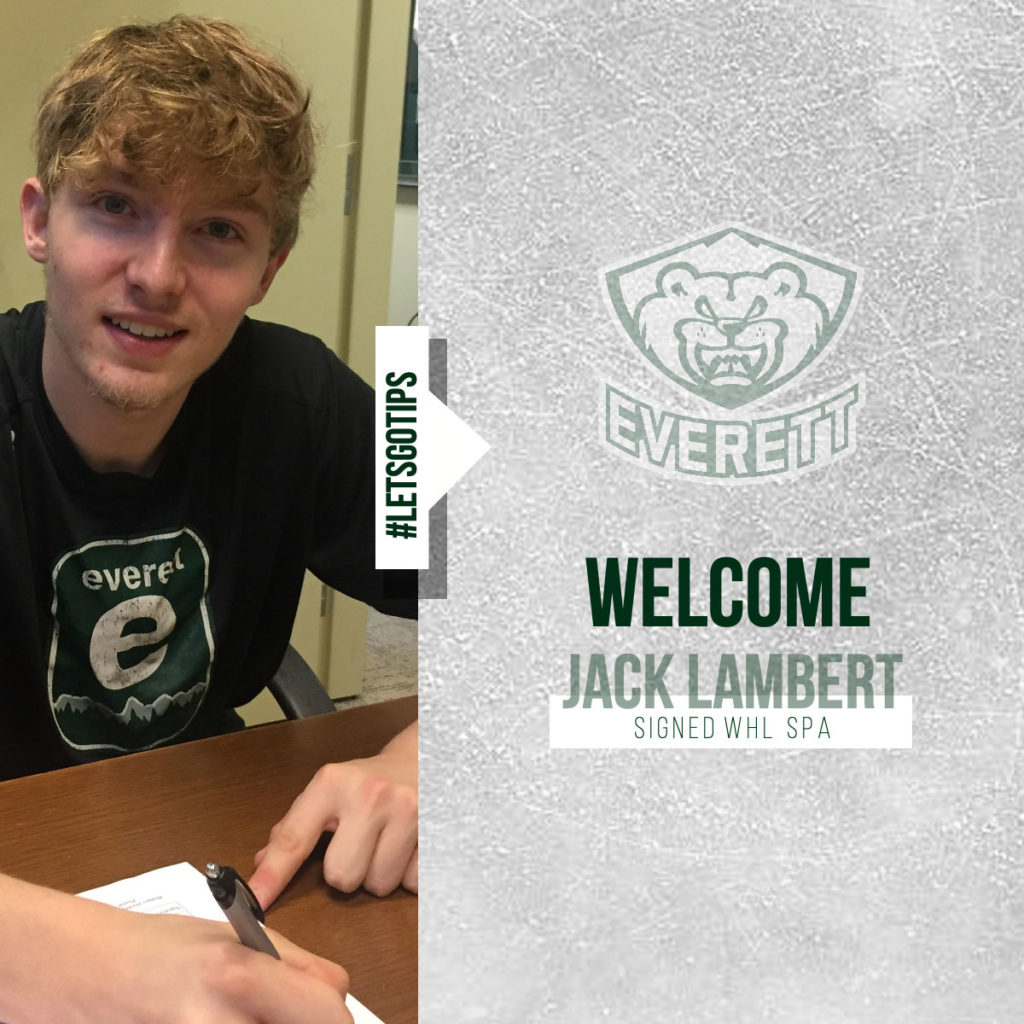 EVERETT, Wash. – The Everett Silvertips (@WHLSilvertips), seven time U.S. Division champion and two-time Western Conference champion of the Western Hockey League, and general manager Garry Davidson announced today that the club has signed U.S. born prospect and forward Jack Lambert to a WHL standard player agreement. Lambert, who spent the previous season competing for the Everett Junior Silvertips 15U squad, is immediately eligible to suit up on the Silvertips roster and will wear jersey #58.

“Jack has rightfully earned the next opportunity of his career in a place he called home last season, and we’re excited about his commitment to the Silvertips and Western Hockey League,” said Davidson. “The effort and ability he demonstrated in training camp is a direct result of his commitment over the past year, and the fantastic job by Turner Stevenson and Rick Ellison in the Junior Silvertips program to guide his progress. He’s a player who manufactures tempo with his speed, has good offensive instincts, and wears his heart on his sleeve. We’re looking forward to monitoring his progress now as an individual with plenty of potential.”

“Jack has a nice second gear to his game and the explosiveness he carries jumped out to our staff during camp,” said Silvertips  head scout Mike Fraser. “His hard work is a testament to how the game is growing in Everett, and how great of a job Turner Stevenson and Rick Ellison have done to develop players. To see local talent commit, excel, make our club and have the potential to make an impact with our veterans, it’s very exciting.”

Lambert, a 2003-born forward, competed for the Jr. Silvertips program (NAPHL 15U) and led the club in points (10), goals (6), and was tied for the program’s playoff lead with four points (3g-1a) while pacing Everett with three postseason goals in four games.

“He works extremely hard not just in practice but also off the ice,” said Junior Silvertips coach Turner Stevenson. “He’s very attentive with improving away from the rink on his skill set – it’s given him a great advantage on scoring goals and being crafty around the net. He’s worked very hard off the ice for an opportunity like this, to get listed, and earn a WHL standard player agreement.”

“Becoming an Everett Silvertip is what I’ve worked for and there’s nothing better and more exciting for what I could have imagined at this step of my career,” said Lambert. “All the guys in the room have been awesome and they make you feel comfortable right away. A lot of credit goes to Rick Ellison and Turner Stevenson with the Junior Silvertips program: they made me into a real hockey player, and were a big help with understanding the game and learning exactly how it was meant to be played. I feel right at home with the city of Everett and I’m looking forward to contributing with effort, speed, getting to pucks first, and making plays.”

When Jack Lambert moved from Fairbanks, AK to Everett for hockey, his hope was to be picked up by a WHL team – preferably the Tips.

Silvertips sign third US born prospect in 3 days in the smooth-skating Lambert, a training camp standouthttps://t.co/KxOHdF0ZMe