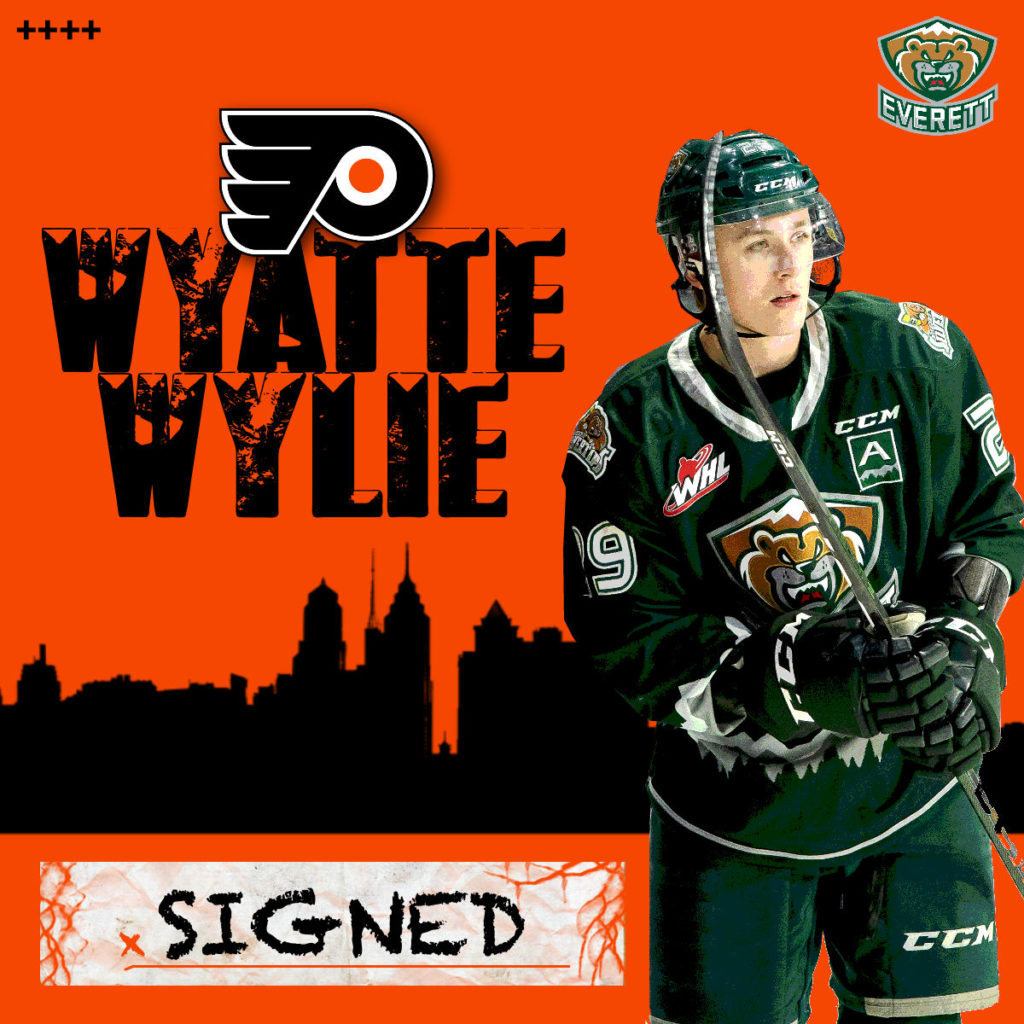 “Wyatte represents an incredible testimony to hometown roots, hard work, and perseverance – it makes us incredibly proud for his effort and a well-deserved opportunity at the next level,” said Silvertips general manager Garry Davidson. “For four full seasons, he has supplied our blue line with high end skill, leadership, and a consistent approach to becoming the best player he can be. Wyatte’s start in Everett Youth Hockey, to playing in his hometown, to making an NHL contract represents another achievement for the Puget Sound and our game. We’re looking forward to his continued progress to finish his overage season, and his pursuits starting next season in the Flyers organization.”

Wylie, 20, is working on career highs in goals (14), assists (50), and points (64) in 62 games, currently ranking second among WHL defensemen in points and leading in assists. He is tied for second in the league for power play assists (28), and is third overall while leading all league defensemen in power play points (35).

The native of Everett, Wash. first began skating in the Everett Youth Hockey program and became the first WHL draft selection in Tips history with prior experience in Everett Youth Hockey. He is tied for second, all-time in points among Silvertips defensemen (152) with teammate Jake Christiansen, and is second all-time in goals (31) among defensemen, suiting up in 272 career WHL games, 12th in Silvertips history.

The 6-foot-1, 190 pound defenseman has helped the Silvertips capture three straight U.S. Division titles and was a part of the Tips 2018 Western Conference championship squad. He has suited up in 43 career WHL Playoff games, earning 13 points (3g-10a) with a +15 rating.

“To reach a day like this, is a moment you dream of your entire career and life, and I’m forever grateful to the Flyers, Silvertips, and for everyone who influenced me along the way,” said Wylie. “Dennis Williams and Kevin Constantine were instrumental in elevating my game, offensively and defensively. My teammates have been the best I’ve ever had in my career, and even mentors like Noah Juulsen, who taught me about preparation and consistency, were so important to help me take the necessary steps for this kind of opportunity with the Flyers. As a Snohomish County native, I’m proud to represent our area. I’m looking forward to helping our team prepare for the postseason, and play my hardest for Silvertips fans now, and the Flyers organization soon.”

Wylie was selected by Philadelphia in the fifth round (127th overall) of the 2018 WHL Draft and has participated in training and development camps with the Flyers. The Silvertips have sent 19 players to the National Hockey League to play, most recently Flyers goaltender Carter Hart, making his debut in the 2018-19 season.

UP NEXT: The Silvertips rest for four days and return to their road swing Friday, visiting Tri-City at 7:05 p.m. (KRKO / Tips App / WHL Live). The Silvertips will host the Victoria Royals on Friday, Mar. 20 for Fan Appreciation Night in their next game back home, with doors opening at 6:00 pm for Hockey Happy Hour presented by Broad Stroke Associates.  Tickets are on sale at www.everettsilvertips.com/tickets.