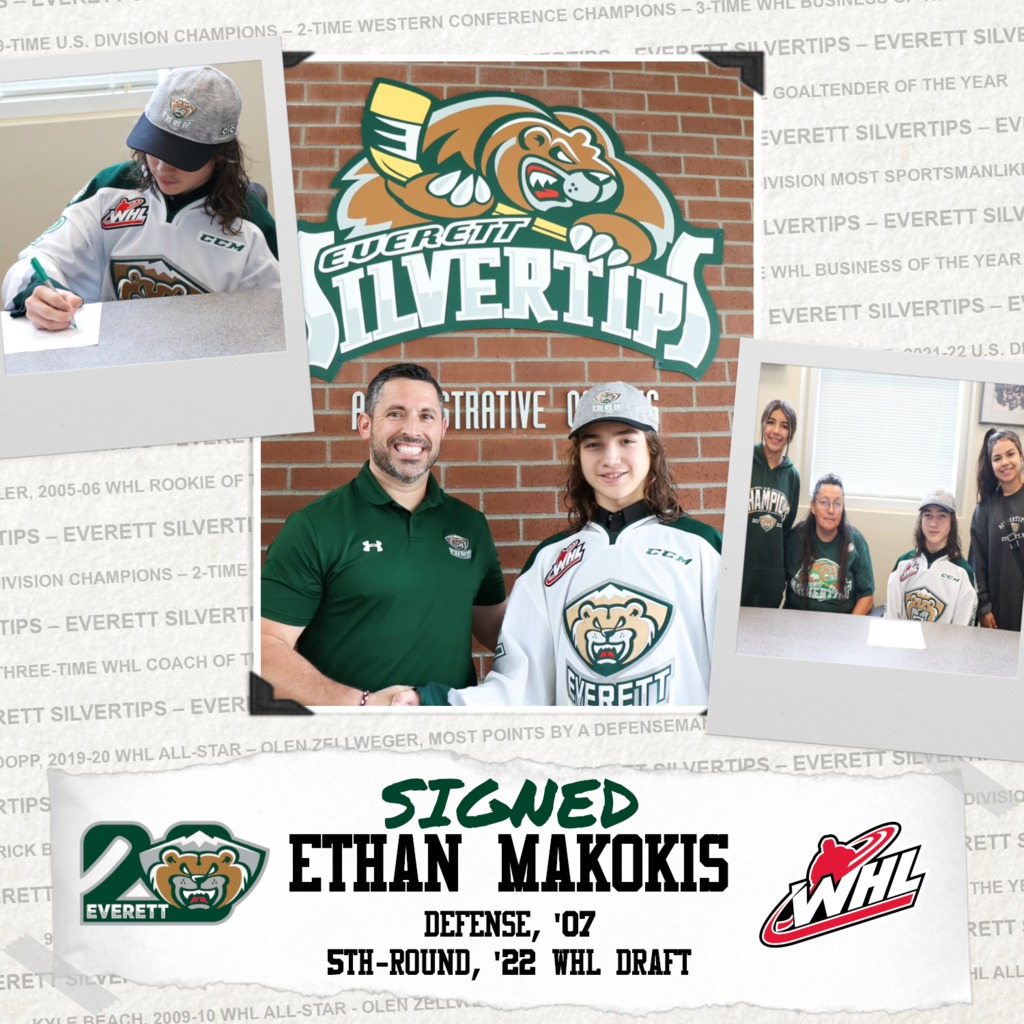 “It feels great to be an Everett Silvertip,” said Makokis. “I get to play with and learn from a bunch of talented guys this year. It’s going to be a fun learning experience and I can’t wait to get started.”

Ethan Makokis ('22 5th-rd @TheWHL Draft pick) throws the poke check, turns on the jets, fights through a stick and lifts a backhander to give Team Dewar their second win of the weekend!#TipsCamp x @bodieskneaded pic.twitter.com/FKqjcb40Hq

Makokis, an ’07-born St. Paul, AB native, was selected 108th-overall in the fifth round of the 2022 WHL Prospects Draft. He spent the majority of the 2021-22 season with OHA Edmonton U15 Prep, where he was a teammate of fellow Everett signee Julien Maze, selected in the first round of the 2022 Draft. Measuring at 5-foot-7, 142 lbs., Makokis logged nine goals and 12 assists in 24 games played, second-best amongst blueliners on his team, while also contributing two points in three playoff games. Additionally, he earned a five-game call-up with OHA Edmonton’s U16 Prep squad, registering an assist in that span.

“We’re really excited to bring Ethan on board,” commented Silvertips general manager/head coach Dennis Williams. “His ability to skate, to create separation, his creativity and his compete all stand out. He has what I would look at as the whole package for today’s modern defenseman. To get him here [t0 Training Camp] this past weekend and secure him as an Everett Silvertip, I can’t tell you how excited I am.”

“For a young player, he doesn’t play that way out there,” Williams added. “It’s great to know you have a player that wants to be a Silvertip, that wants to play in the league. I think he’s got a really bright future and we look forward to helping him develop his game over the next few years.”

In tournament play, Makokis was a point-per-game player at the 2022 Alberta Cup with Alberta Team Yellow, posting a goal and three assists in four games. He earned Player of the Game honors during his Apr. 30 matchup against Team Alberta Green. Prior to the Alberta Cup, Makokis netted an overtime winner to secure the bronze medal for OHA Edmonton at the John Reid Memorial U15 AAA Tournament in January. OHA Edmonton also reached the bronze medal game at the 2021 NWCAA Rocky Mountain Classic, where Makokis earned Team MVP honors in their Nov. 10 contest.

Ethan Makokis scores in OT to give OHA Edmonton the Bronze medal.

He’s been lights out incredible. Dynamic at 5on5 and off the right halfwall on the PP all tournament long. #2022WHLDraft

“He’s an electric player,” noted Silvertips assistant general manager Mike Fraser. “He plays a very exciting game, a style that we like in Everett. He’s quick, explosive with really good feet. He may be one of the best skaters as a d-man in his draft class. We’re really happy to have him on board.”

Makokis, a member of Saddle Lake Cree Nation, impressed during Silvertips Training Camp with standout play during scrimmages, including a 3-on-3 overtime winner on Day Two. He was quick to identify fellow defenseman and Anaheim Ducks prospect Olen Zellweger as both inspiration and a mentor during Camp.

“He’s a World Junior Champion,” Makokis praised, acknowledging Zellweger’s Gold Medal earned with Hockey Canada at the 2022 tournament in August. “I learned from him by playing against him [in Camp]. It was just fun to watch him. I’d like to be the next Olen Zellweger.”

By signing a WHL Standard Player Agreement, Makokis is guaranteed a WHL Scholarship for every year he plays in the WHL.