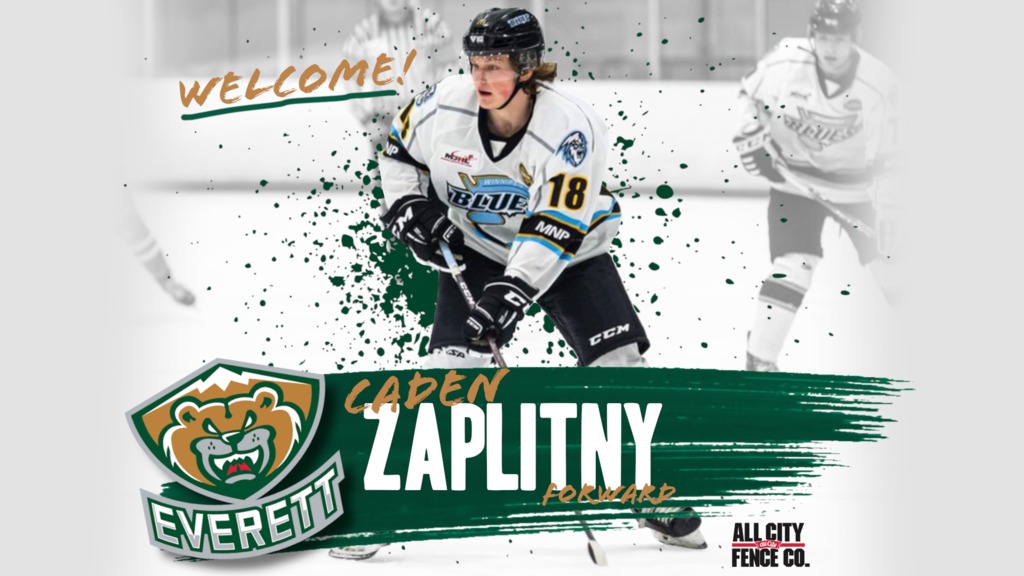 EVERETT, Wash. — The Everett Silvertips have signed forward Caden Zaplitny for the 2021-22 season.

Zaplitny, an ’04-born East Saint Paul, MB native, has been skating with the Winnipeg Blues in the Manitoba Junior Hockey League this season, recording six goals and eight assists in 22 games.

“I’m just thrilled to be a part of such a great organization like Everett,” commented Zaplitny. “The WHL is a great league. It’s been a goal of mine for a really long time now, so I’m happy to see myself finally taking some steps in the right direction and I can’t wait to see what the future holds.”

“Cade has worked very hard for this and has earned this contract,” noted Silvertips Director of Player Personnel Mike Fraser. “He’s quickly worked his way up a veteran-laden Blues lineup as one of the youngest players on their squad. He’s a solid two-way player that has chipped in with some good offense this season. He’s always striving to make himself a better player and has made significant strides in his game since he was listed following Tips training camp in 2019.”

Silvertips head coach and general manager Dennis Williams was impressed by Zaplitny at training camp this past fall.

“His game has taken great strides from camp through the three months now that he’s been playing [in Winnipeg],” Williams said. “He’s been able to adapt to junior hockey. He plays an honest, 200-foot game. His compete has been fantastic. Watching his games, he’s tracking, he’s finishing checks, he’s reloading, he’s scoring goals and setting up goals.”

Williams also acknowledged a need for ’04-birth years to fill out the Everett roster for the future, as prior to signing Zaplitny, only six of the 22 actively rostered Silvertips are of an ’04 or ’05-birth year.

“We’re excited about getting him in here and working with him over the next four years to do our best to make him a pro hockey player.”

“He’s got that maturity to play in all three zones,” Sinclair observed. “He’s a consistent worker. Right now, where he’s at in Junior A, that’s primarily a 20-year-old’s league. And as a 17-year-old, he’s logging quite a bit of minutes. He’s shown flashes of skill, but it’s that defensive side of the puck and the work ethic.”

“To me, he’s one of those guys you can plug in anywhere,” he continued. “He fits in well with what Dennis [Williams] is doing and what the club is doing.”