SELECT-A-SEAT MONTH IS HERE | CLICK HERE FOR DETAILS & LOCK IN THOSE SEATS YOU HAVE ALWAYS BEEN LOOKING FOR!
June 7, 2022 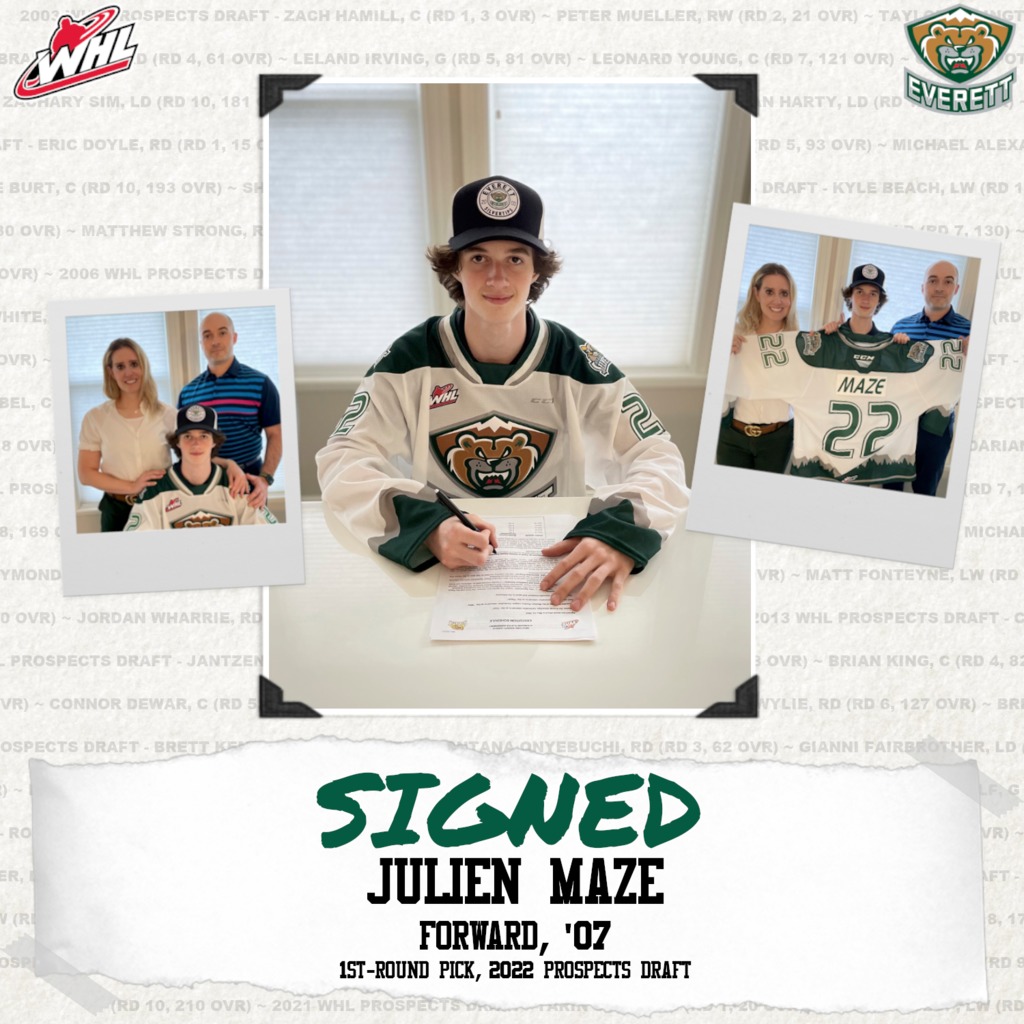 “It feels amazing to sign with the Silvertips,” said Maze. “No words can describe it. I’m so thankful and humbled to be drafted and trusted to be in such an amazing organization. I’m looking forward to getting down to Everett and meeting the players, staff and fans.”

Maze, an ’07-born Edmonton, AB native, was selected 20th-overall in the first round of the 2022 WHL Prospects Draft on May 19. He caught the eye of the Everett scouting staff as one of the youngest prospects in the draft class, amassing 23 goals and 24 assists for 47 points in 25 total regular season games with OHA Edmonton Prep at the U15 and U16 levels. He also recorded two points in three playoff games with the U15 Prep team.

“We’re really excited to officially sign Julien,” said Silvertips general manager/head coach Dennis Williams. “We feel Julien brings tremendous amount of skill, playmaking and competitiveness with high character. He blends really well with our program and how we want to play on the ice and act off it. We look forward to having him and his family with our organization here in Everett.”

A left-handed shot measuring at 5-foot-8, 130 pounds, Maze is the third first-round selection the Silvertips have made in the last six drafts with all three coming at the 20th-overall slot; Tarin Smith (2021) and Ronan Seeley (2017) were the previous two. Twelve Everett first-round picks have gone on to play for the Silvertips in franchise history, including Zach Hamill (3rd-overall, 2003), Kyle Beach (10th-overall, 2005) and Ryan Murray (9th-overall, 2008). Hamill, Beach and Murray would each later be drafted in the first round of the NHL Entry Draft, with three others selected in later rounds: Kent Simpson (2nd round, 2010), Nicholas Walters (4th round, 2012) and Ronan Seeley (7th round, 2020).

“I’m really looking forward to finding a new level of play and using it to my advantage,” Maze noted. “I want to start a new grind.”

“We’re excited to have Julien on board,” commented Silvertips director of player personnel Mike Fraser. “He will be a big part of our future. He’s an exciting, dynamic forward who checks off all the boxes. He will fit in perfectly with the Silvertips and our team culture.”

At the time of his signing, Maze shared a personal mantra he felt embodied his drive and work ethic, a quote from NBA legend Michael Jordan: “Some people want it to happen, some wish it would happen, others make it happen.”

By signing a WHL Standard Player Agreement, Maze is guaranteed a WHL Scholarship for every year he plays in the WHL.