SELECT-A-SEAT MONTH IS HERE | CLICK HERE FOR DETAILS & LOCK IN THOSE SEATS YOU HAVE ALWAYS BEEN LOOKING FOR!
June 17, 2022 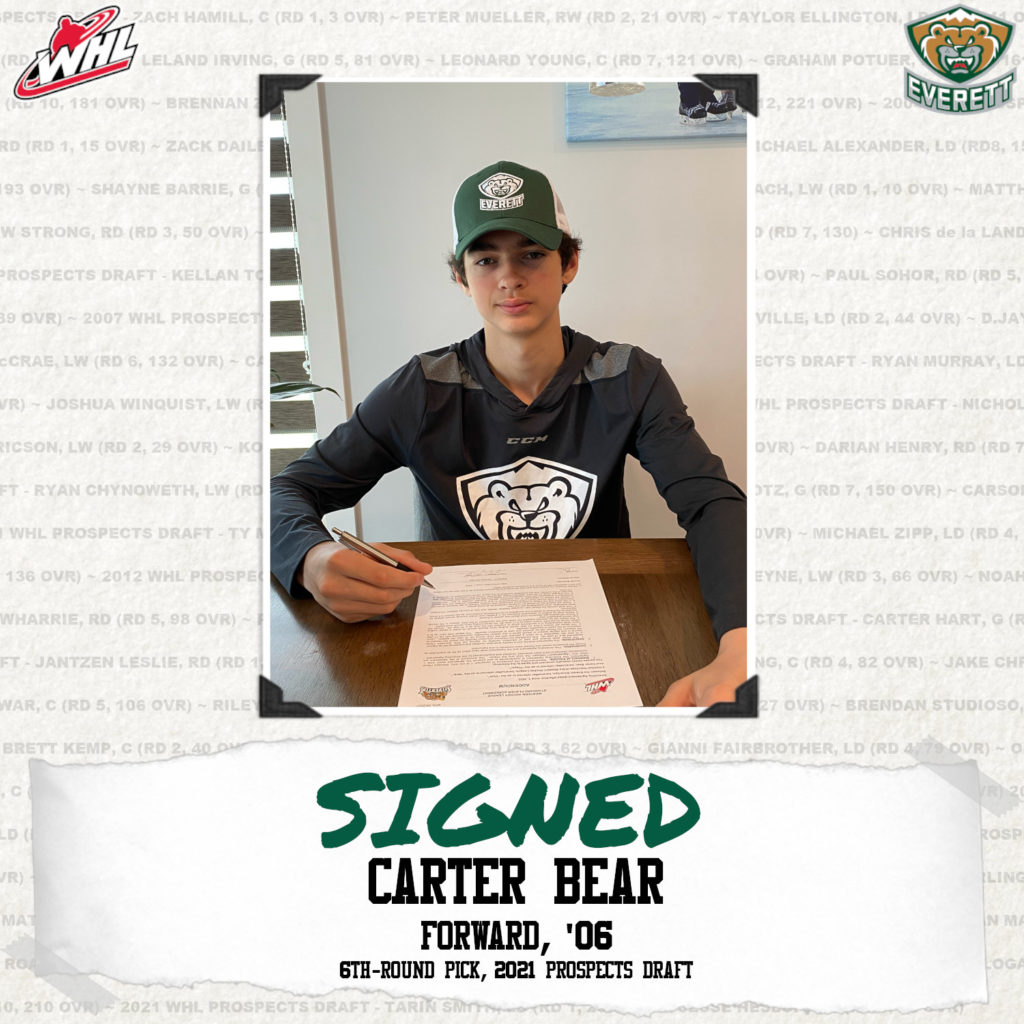 “I’m very excited to sign with Everett and join such a great organization,” said Bear. “[Head coach/general manager] Dennis Williams, [director of player personnel] Mike Fraser and [Manitoba senior scout] Doug Sinclair have been so supportive throughout the process. It’s awesome to be surrounded with quality people. I can’t wait to get on the ice and get going.”

Bear, an ’06-born West St. Paul, MB native, was selected 132nd-overall in the sixth round of the 2021 Western Hockey League Prospect Draft in December. He spent the 2021-22 season with the Winnipeg Thrashers U18 AAA squad, where he logged 25 goals and 17 assists for 42 points in 39 games. He also added two points in three playoff games. Bear played five games with Team Manitoba at the 2021-22 WHL Cup, where he earned an assist.

“We’re extremely excited about having Carter commit to our program,” commented Dennis Williams. “The growth to his game throughout the year was tremendous. Add in his high character off the ice and he fits in great with our program. We look forward to seeing Carter at camp in the fall.”

Congratulations to Carter Bear of Peguis First Nation for being drafted in the 2021 WHL Bantam Draft by the Everett Silvertips in the 6th round, 132nd overall! 🪶🏒 @WHLsilvertips pic.twitter.com/oaGvFrcqjk

“Carter took very little time to adjust to the level of play as one of the youngest players in Manitoba U18 AAA hockey last season,” noted Mike Fraser. “He earned this opportunity with his progress and development during the year and proved he’s a top offensive player with a bright future for the Silvertips.”

By signing a WHL Standard Player Agreement, Bear is guaranteed a WHL Scholarship for every year he plays in the WHL.