SILVERTIP SEND-OFF: Alex Swetlikoff leads the way on and off the ice in final junior season 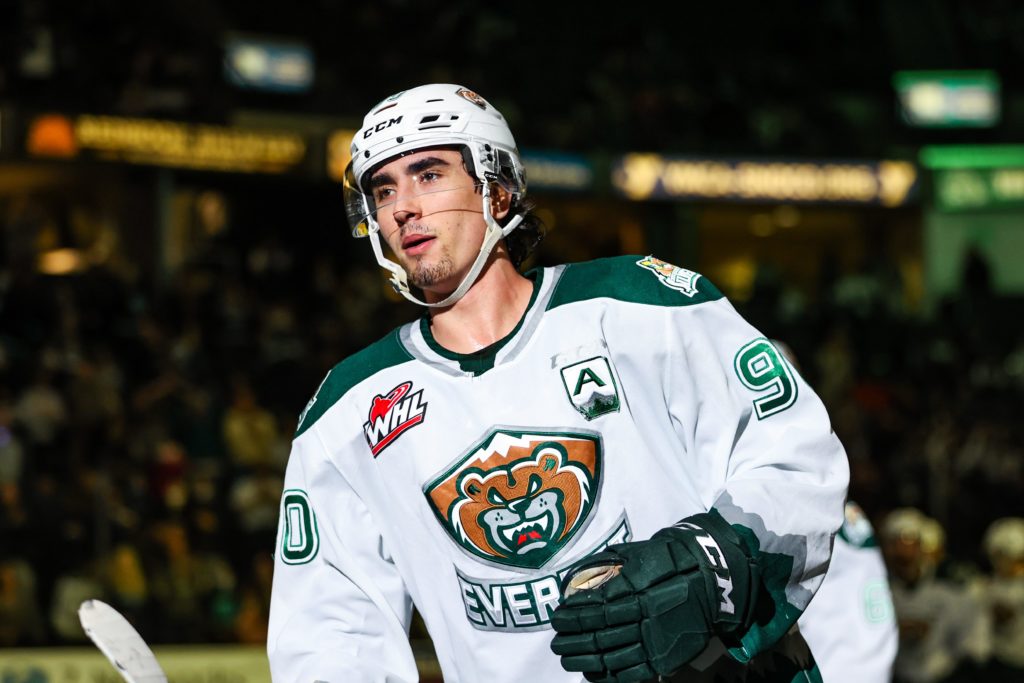 None of the three over-agers on the Silvertips’ roster began their stint in junior hockey in Everett.

One by one, they were brought to the organization to finish their Western Hockey League careers in green.

The Silvertips filled their final over-age spot in August of 2021.

A swap of Kelowna-born forwards with the Rockets sent Alex Swetlikoff and a 2023 sixth-round pick to Everett in exchange for 2004-born forward Max Graham.

Swetlikoff, originally drafted by the Lethbridge Hurricanes but whose rights traded to Kelowna, was coming off a successful- albeit abbreviated- season with the Rockets. He had produced at a point-per-game clip, potting six goals with nine assists in 15 appearances in the 2020-21 campaign.

With the loss of some big point producers up front from the previous season- including their top three of Cole Fonstad, Gage Goncalves and Ethan Regnier- the Tips had a need for scoring depth, especially down the middle.

“I watched a lot of his games in Kelowna,” acknowledged Silvertips head coach and general manager Dennis Williams. “I wanted to find a 20-year-old forward, but I wanted to find a center with size. One that can play all facets of the game.”

Swetlikoff has delivered exactly what Williams desired. The Silvertips’ head coach emphasized that Swetlikoff “logs the most five-on-five minutes” on the roster. He has registered 84 points in 67 games, including 33 goals. Seventeen of those goals have come on the powerplay, a mark that leads the team and ranks second in the Western Hockey League. He also contributed one of the Silvertips’ four shorthanded goals on the season.

As a team, Everett has scored more powerplay goals than any other team in the WHL (78) while also owning the fourth-best penalty kill in the Western Conference (79.1%). Swetlikoff is a major reason why.

“Alex comes to work every day and wants to get better,” Williams praised. “Our promise to him was to push him, to get him outside his comfort zone on a consistent basis, and to do our best to make him a pro hockey player. His play without the puck, his play in the defensive zone, his face-offs have been really good and a big key to why we have had success so far.”

Alex Swetlikoff: All of the Lights@aswet90's last 12 games: 9 goals, 11 assists, plus he's eclipsed 20 goals for the first time in his @TheWHL career.

With Swetlikoff arriving close to the start of training camp, and with the coaching staff levying big expectations on him as a scorer and a leader, the pushing began right away.

“[A]fter the first ten days of training camp, he looked like he was about to quit on us,” Williams laughed. “I always joke with him about it. We come through a tough training camp, and when you have new players, it’s different.”

But Swetlikoff saw early results. He opened the season with a five-game point streak, the final game of which featured his first career hat trick in a 5-2 win against the Portland Winterhawks.

“The coaching staff has done a great job with the development of the team,” Swetlikoff said. “They’re always pushing us to be our best and squeezing a lot out of us. As a player and a person, I’ve developed a lot this year.”

Swetlikoff was quickly named an alternate captain by the Silvertips, and even donned the captain’s “C” for a brief time with co-captain Ronan Seeley away at the World Junior Championship and Jackson Berezowski shelved for five games with an upper-body injury in late December. He orchestrated the longest Everett point streak of the season, stretching 17 games from Feb. 12 through Apr. 1 (the streak also ranks as the fourth longest of any player in the WHL this season). After being held off the scoresheet for two games following the final game of the streak, Swetlikoff returned with a vengeance netting his second hat trick of the season in the Silvertips’ regular season home finale.

“It’s meant a lot to be a part of this organization,” said Swetlikoff. “Just the history of the program, all the players that have come through here. It’s special to be a part of. I’ve only been here for the one year, but it feels like I’ve been here longer. All the guys have welcomed me in.”

Swetlikoff earned the Coach’s Award at the Silvertips’ Team Awards Ceremony, as well as the Iron Man Award for playing in every game in the 2021-22 season.

With 17 goals and 29 assists registered in 34 games played at Angel of the Winds Arena, Swetlikoff says he will miss the fans in Everett most of all.

“The fans have been unreal,” he explained. “They bring the energy every night. They’re electric. The cowbells…I’ve never experienced anything like that. We truly have the best fans in the WHL. Their support night in and night out, I’m gonna miss that.”