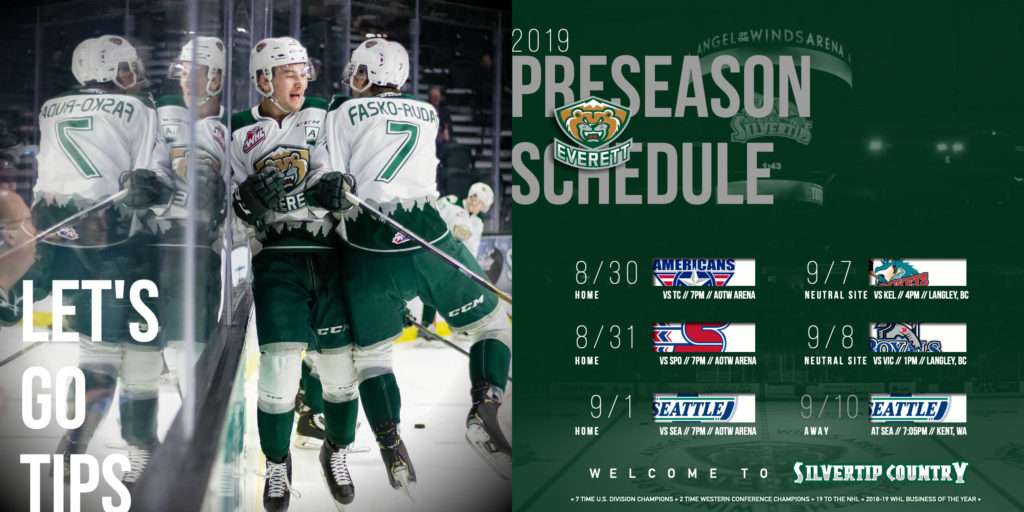 EVERETT, Wash. – The Everett Silvertips (@WHLSilvertips), seven-time U.S. Division champions and the 2018-19 Western Hockey League Business of the Year, announced today their 2019-20 Pre-Season Schedule, and 16th annual schedule opening tournament as the Delta Hotels Preseason Classic in Everett begins play Labor Day weekend, on Friday, Aug. 30. The Silvertips will open their pre-season schedule that night at 7:00 p.m. against the Tri-City Americans at Angel of the Winds Arena, a rematch of the 2019 WHL Playoffs’ first round.

Ticket packages and single game tickets for the Delta Hotels Preseason Classic in Everett will be on sale by Aug. 1 at www.everettsilvertips.com/tickets, available for pick-up on Aug. 26, beginning at 9:00 a.m. Silvertips membership account holders for the 2019-20 season receive Delta Hotels Preseason Classic ticket packages free of charge, inclusive with membership benefits.

The Silvertips will play in a six-game pre-season schedule (three games at home). The Delta Hotels Preseason Classic in Everett, traditionally welcoming all U.S. Division clubs plus an additional member from the Western Conference, again add the Vancouver Giants, the defending Western Conference champions. The three-day tourney, Aug. 30-Sept. 1, opens with an 11:30 a.m. matchup, follows with a 3:00 p.m. matinee game, and concludes each day with a 7:00 p.m. Silvertips home game.

The Silvertips will battle their U.S. Division rival Seattle Thunderbirds twice during the pre-season, including a pre-season finale in at accesso ShoWare Center in Kent, Wash., on Tuesday, Sept. 10 at 7:05 p.m. 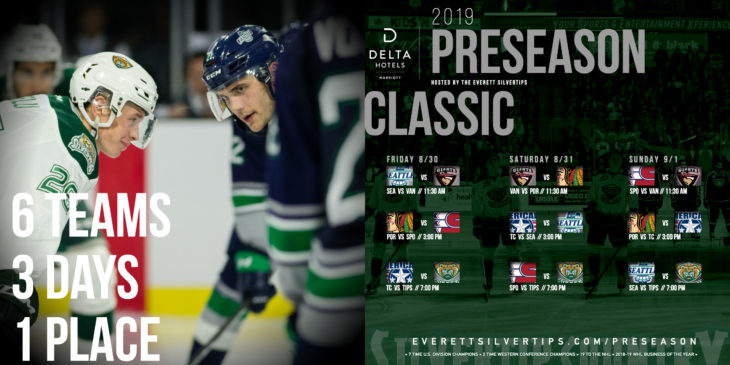 The regular season schedule for the 2019-20 season will be announced soon, offering full 34-game season tickets, 22-game, and 14-game plans for as little as $215 total per seat. Deposits for $50 will secure a seat for the 2019-20 season, available at www.everettsilvertips.com/season or by calling (425) 252-5100 during normal business hours (Monday through Thursday during the offseason, 9am to 4pm)/