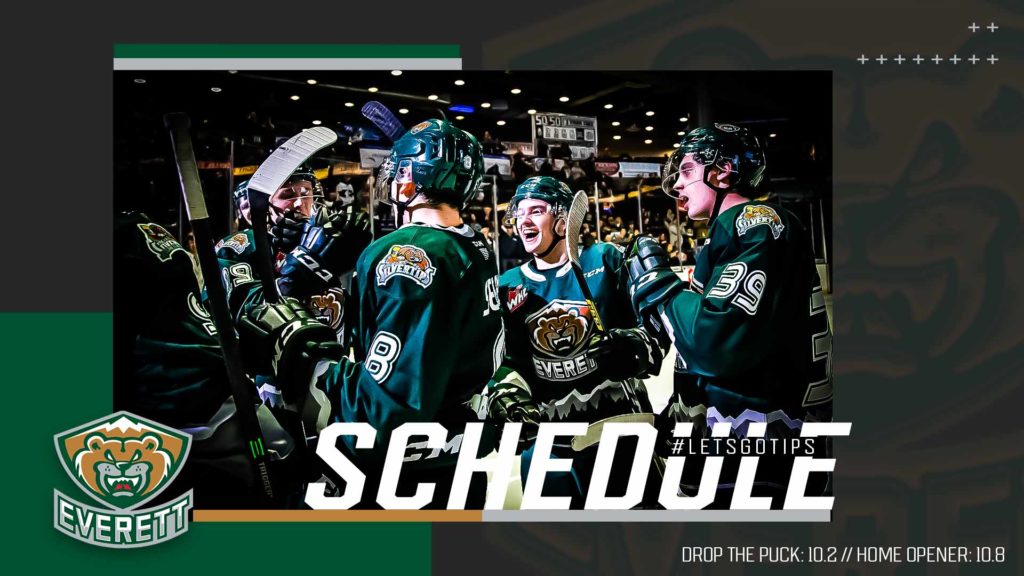 EVERETT, Wash. – The Everett Silvertips (@WHLSilvertips), two-time Western Conference champions and eight time U.S. Division champions of the Western Hockey League, announced today their 19th season of play in the WHL and defense of their eighth U.S. Division title will open on Saturday, Oct. 2 at 7:05 p.m. in a road matchup against the Kelowna Rockets, launching a full 68-game regular season schedule.

Priority seating and guaranteed home opener tickets for Oct. 8, when the Silvertips host Portland at 7:05 p.m. are available now by placing a $50 deposit for Silvertips Season Ticket or Mini-Plan Packages (available in full season, 22-game, of 14-game plans) at www.everettsilvertips.com/deposit or by calling (425) 252-5100 (extension 1). Further details on the Silvertips game-by-game promotional and giveaway schedule will be announced soon.

The Silvertips full schedule, in addition to pre-season, can be viewed here.

“With the 2021-22 Everett Silvertips regular season schedule fully announced at 68 games, it gives us time to express more gratitude and appreciation to our fans who have waited patiently for a return to our normal, familiar, and full-scale competitive calendar,” said Silvertips and Consolidated Sports Holdings chief operating officer Zoran Rajcic. “A total of 29 out of 34 home dates will be played on Friday, Saturday, or Sunday, maximizing the availability of families in our fan base. We’ve paid careful attention to listen to our fans, and are pleased to announce a new slate of game times, including 7:05pm starts on Fridays, and 6:05pm starts on Saturdays. October 8 will mark our first regular season home game in 18 months with the roar and passion of our fans, and we can’t wait to enjoy the thrill of Silvertips hockey with them once again, all season long.”

To celebrate the home launch of Silvertips hockey for the 2021-22 season, “Select-A-Seat” returns on Tuesday, July 6, hosted in a virtual format. Phone call appointments are underway for renewed accounts interested in new seating arrangements, and new season ticket and mini plan accounts will begin arrangements from July 6-9. Fans will have one-on-one attention with a Silvertips ticket sales representative, and first right of refusal for account options for the 2021-22 season. More information on securing a Silvertips ticket package is available at www.everettsilvertips.com/tickets or by calling (425) 252-5100.

Before the Silvertips raise the banner for their eighth division title to the rafters on Oct. 8, the Silvertips will open the season on the road for the first time since 2016-17, when they defeated the Vancouver Giants en route to the U.S. Division title, which will also mark their first road game in Canada since Feb. 28, 2020, before the pandemic stoppage when they visited Kelowna in a 4-3 overtime victory.

Among the highlights for the 2021-22 season include:

The Silvertips open the 2021-22 pre-season on Friday, Sept. 10 as part of the annual Silvertips Preseason Classic in downtown Everett, 6:00 p.m. against the Spokane Chiefs. The six-game, three-day event will host the Silvertips fellow U.S. Division rivals, with ticket packages and single game ticket information coming soon.