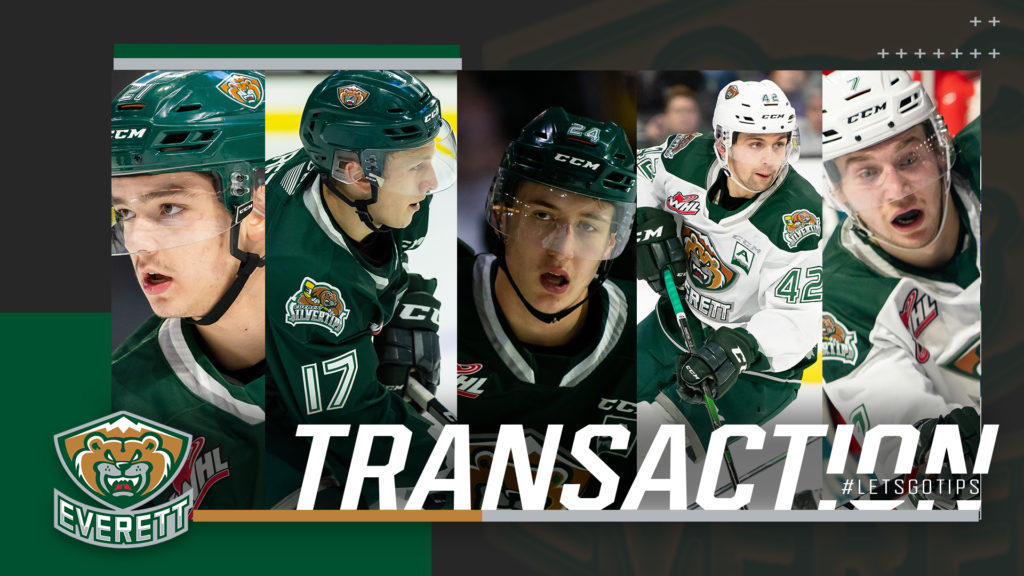 EVERETT, WA – The Everett Silvertips of the Western Hockey League have announced the following transactions for the beginning of the 2020-21 season:

All five players remain on the Silvertips protected list, allowing full participation in BCHL and SJHL practices, workout activities, and games until a loan expiration of Dec. 20, when players are to be returned to the Silvertips in preparation for the WHL’s scheduled start date of Jan. 8.

Anderson, a 2002-born blueliner, last season had a goal and three assists in 55 games on the blueline, along with a +4 rating in his rookie season. He made his WHL debut with the Silvertips in 2017-18, suiting up in one game and was originally selected by the Silvertips in the fourth round (75th overall) in the 2017 WHL Draft.

Berezowski, a 2002-born forward, reached career highs in goals (18), assists (18) and points (36) along with a +13 rating in 61 games, en route to earning the Silvertips Unsung Hero Award. The Yorkton, Saskatchewan native was selected by the Silvertips in the second round (44th overall) in the 2017 WHL Draft and has 29 goals and 51 points in 126 WHL games, all with the Silvertips.

Fairbrother, 20, last season had 25 points (5g-20a) in 37 games along with a +6 rating with the Silvertips and has 66 points (17g-49a) in 137 career WHL games, all in Everett. The North Vancouver, British Columbia native was selected by the Montreal Canadiens in the third round (77th overall) in the 2019 NHL Entry Draft and helped guide the Silvertips to the Western Conference championship in 2017-18, also owning eight points (1g-7a) and a +11 rating in 35 career WHL Playoff games.

Fonstad, 20, last season was named co-recipient of the Silvertips Most Valuable Player award, sharing the lead in points (74) with Bryce Kindopp and leading the program in assists (59) in 60 WHL games. The Estevan, Saksatchewan native was acquired by the Silvertips from the Prince Albert Raiders on Oct. 13, 2019 in exchange for center Reece Vitelli, two draft selections in the 2021 WHL Draft, and a conditional third round selection in the 2022 draft. He has 247 points (76g-171a) in 270 career WHL games, was selected by Montreal in the fifth round (128th overall) in the 2018 NHL Entry Draft and helped guide the Raiders to a WHL championship in 2018-19.

Regnier, 20, last season had 29 points (14g-15a) and won 584 face-offs in 59 games spit between the Silvertips and Swift Current Broncos and was acquired by the Silvertips from Swift Current on Jan. 10 with defenseman Kasper Puutio, in exchange for right winger Martin Fasko-Rudas, defenseman Parker Hendren, and a pair of selections in the WHL Draft. The Prince Albert, Saskatchewan native has 68 points in 184 career WHL games, and helped guide the Broncos to a WHL championship in 2017-18.