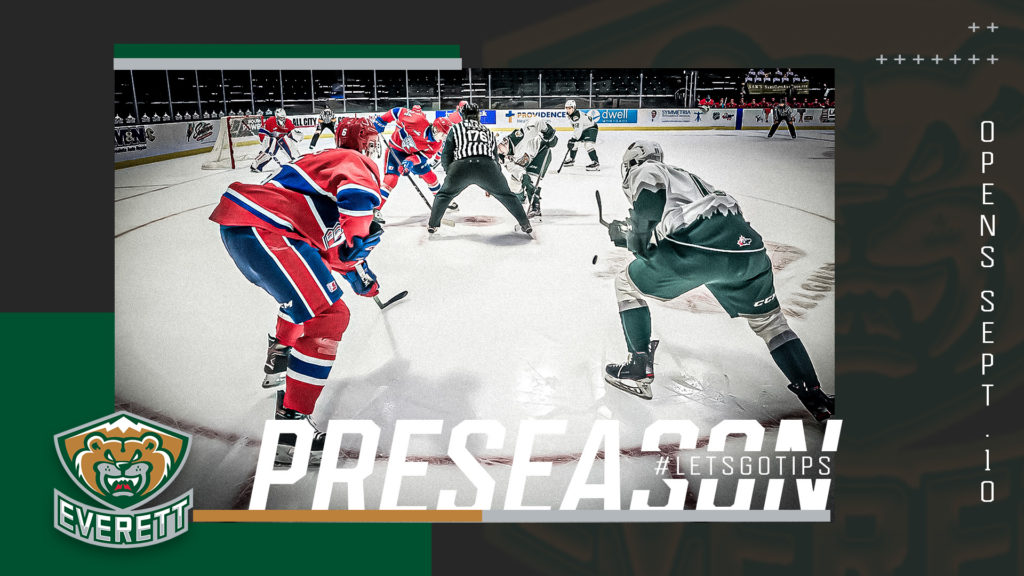 EVERETT, Wash. – The Everett Silvertips (@WHLSilvertips), two-time Western Conference champions and eight time U.S. Division champions of the Western Hockey League, announced today their 2021-22 Pre-Season Schedule, and the return of the Silvertips Annual Preseason Classic in Everett which opens Friday, Sept. 10 at Angel of the Winds Arena. The Silvertips will open their pre-season schedule that night at 6:00 p.m. against the Spokane Chiefs at Angel of the Winds Arena.

Ticket packages and single game tickets for the Preseason Classic in Everett will be announced and on sale later this summer.

The Silvertips will compete in a six-game pre-season schedule (three games at home). The Silvertips Preseason Classic in Everett, traditionally welcoming in U.S. Division clubs for the first viewing of potential WHL talent, opens Friday, Sept. 10 with a 2:00 p.m. matchup between the Portland Winterhawks and Seattle Thunderbirds, and ends each day with a 6:00 p.m. Silvertips home game.

The Silvertips will take on their U.S. Division rival Seattle Thunderbirds twice during the pre-season, including a pre-season finale on Tuesday, Sept. 21 at accesso ShoWare Center at 7:05 p.m.

SILVERTIPS PRESEASON CLASSIC (All games at Angel of the Winds Arena)

Priority seating and guaranteed home opener tickets for Oct. 8, when the Silvertips host Portland at 7:05 p.m. are available now by placing a $50 deposit for Silvertips Season Ticket or Mini-Plan Packages (available in full season, 22-game, of 14-game plans) at www.everettsilvertips.com/season or by calling (425) 252-5100 (extension 1). The Silvertips full 68-game regular season schedule will be announced soon.

To celebrate the home launch of Silvertips hockey for the 2021-22 season, “Select-A-Seat” returns on Tuesday, July 6, hosted in a virtual format. Phone call appointments will be scheduled starting June 21 to renewed accounts interested in new seating arrangements, and new season ticket and mini plan accounts will begin arrangements from July 6-9. Fans will have one-on-one attention with a Silvertips ticket sales representative, and first right of refusal for account options for the 2021-22 season.