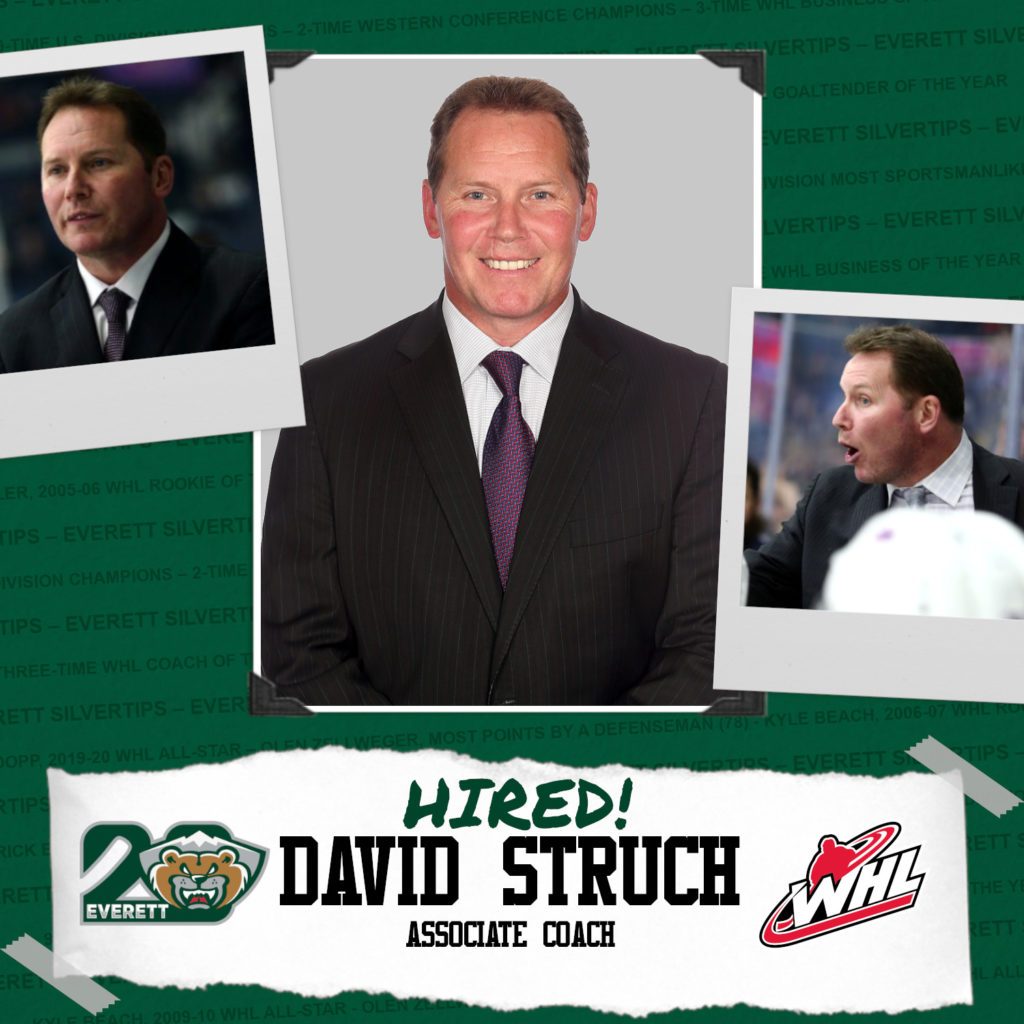 EVERETT, Wash. — The Everett Silvertips have officially hired David Struch as associate coach ahead of the 2022-23 season.

“I’m very excited and privileged to have the opportunity to work with this hockey staff, business operations and most importantly the players,” said Struch. “The Silvertips program has been and continues to be one of the most well-respected organizations in the Canadian Hockey League. I’m looking forward to helping maintain and grow the winning culture that has been developed here in Everett!”

Struch, 51, is entering his 17th season coaching in the Western Hockey League. He most recently worked for the Regina Pats, where he was hired as an assistant coach in 2014-15 before being promoted to head coach in 2018-19. While behind the bench in Regina, Struch helped lead the Pats to the 2017-18 Memorial Cup. He also took on responsibilities as assistant general manager for five seasons while in Regina, remaining on staff until Nov. 18, 2021.

“We’re very happy to have David join our staff,” commented Silvertips general manager/head coach Dennis Williams. “He comes to us with terrific experience both in the WHL and at the international level. He has tremendous knowledge of the game, he’s incredibly passionate and has a keen eye for developing players on and off the ice. With his track record as a leader and a communicator, we know he’ll be a welcome addition to our staff and our program. We’re looking forward to welcoming him and his family to the Everett organization.”

Prior to Regina, Struch spent eight seasons with the Saskatoon Blades, rising from assistant coach beginning in 2006-07 to associate coach in 2012 and head coach in 2013. While with the Blades, Struch coached in the 2012-13 Memorial Cup.

Struch has also been heavily involved with Hockey Canada at a number of levels. He has twice assisted Team Canada at the IIHF U-18 World Junior Championship in 2022 and 2019, assisted for Canada Black at the 2016 U-17 World Hockey Challenge and served as head coach for Canada Black the following year. Additionally, Struch was an assistant coach of the WHL All-Stars at the 2019 Jr. Super Series.

As a player, Struch spent four seasons in the WHL with the Saskatoon Blades, racking up 134 goals and 151 assists in 253 games. He helped the Blades on their way to the 1989 Memorial Cup Final- an overtime thriller with the Swift Current Broncos. He enjoyed a 14-year professional hockey playing career, including four games played at the NHL level with the Calgary Flames. He retired following the 2004-05 campaign.