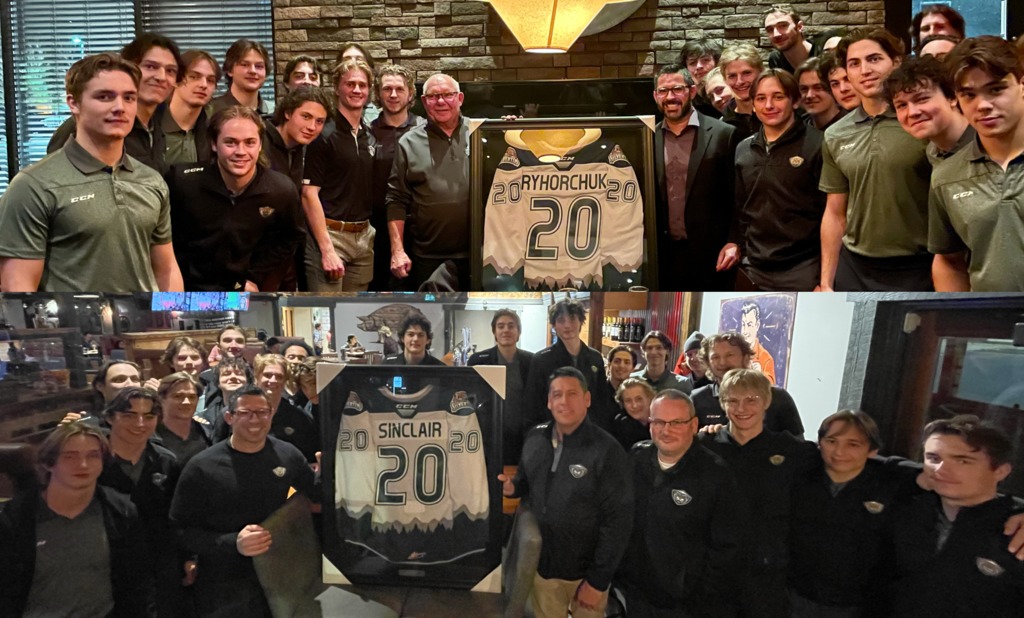 EVERETT, Wash. — The Everett Silvertips paid tribute to two of their architects while on the road last week.

Senior Scouts Garry Ryhorchuk and Doug Sinclair were presented with special custom jerseys honoring their 20 years with the Everett Silvertips organization while on the road last week.#ForEverett pic.twitter.com/uJ4KtfweeV

Garry Ryhorchuk (Senior Scout, Saskatchewan) and Doug Sinclair (Senior Scout, Manitoba) were presented with custom jerseys honoring 20 years spent with the Everett Silvertips organization. Since the team’s inception, Ryhorchuk and Sinclair have been instrumental in finding high caliber players and high character individuals to complete the Silvertips roster year in and year out.

“Everybody knows how lucky we are to have had a person like Garry for twenty years,” said general manager and head coach Dennis Williams in an address to the team in Regina, SK. “His commitment to the program, his loyalty to the program, we can’t thank him enough for that.

“Everybody talks about the great players we’ve had in our program,” he continued, “but the great players are here because of guys like Garry giving countless hours making phone calls, being at the rink, volunteering a lot of his time so that the program succeeds the way that it has.”

The team then honored Sinclair in Winnipeg, MB at a team dinner.

“Doug is one of the founding fathers for our group,” said Williams. “He’s done a great job of finding players in the Saskatchewan and Manitoba areas. The job is so important to us, identifying not just the talent level but the character of a player, which is just as important to us here in Everett.”

“You’ve helped me with skates throughout the summer,” Hofer praised. “All you want to do is help us out and improve and get better. We all just want to thank you.”