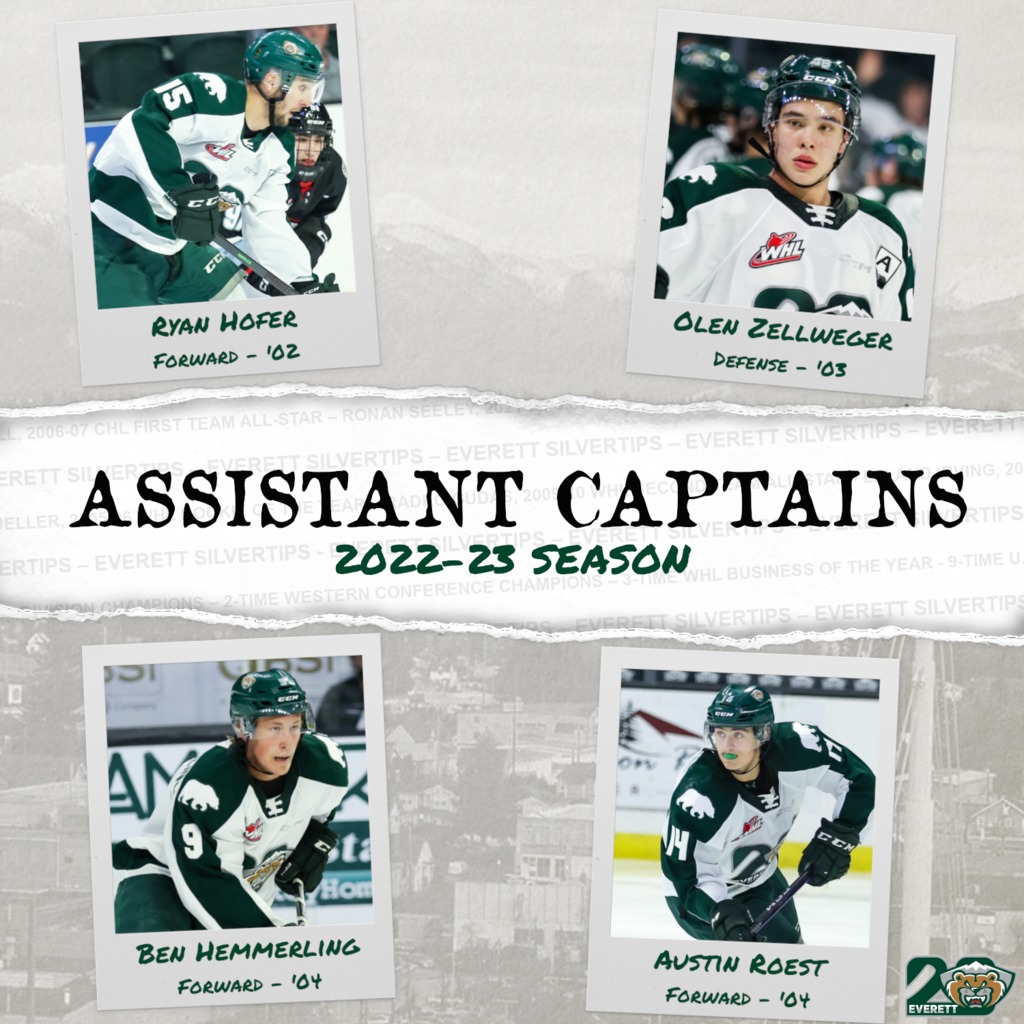 Zellweger retains the assistant captaincy having worn the “A” on his sweater last season along with Hunter Campbell and Alex Swetlikoff. This will be Hofer, Hemmerling and Roest’s first time serving in a captaincy role with the Silvertips.

The Silvertips named Jackson Berezowski, an ’02-born forward, their captain on Sep. 23.

“We’re very excited for this leadership group to take the next step in their development,” commented Silvertips general manager/head coach Dennis Williams. “We rely heavily on our returning players to be a vocal presence in the locker room, and Olen Zellweger was a great influence as an assistant captain last season. Ryan Hofer is a dedicated and driven player who brings valuable experience in his 20-year-old season. We also look forward to working with future leaders of this organization like Ben Hemmerling and Austin Roest, who have shown great poise and maturity in their young careers.”

Zellweger, a 19-year-old Fort Saskatchewan, AB native, re-joins the Silvertips after a successful stint with the Anaheim Ducks in the NHL preseason. He had a very successful summer, helping lead Hockey Canada to a gold medal at the 2022 World Junior Championships, a tournament in which he led all defensemen in scoring with two goals and nine assists in seven games. The 34th-overall pick in the 2021 NHL Draft set a Silvertips franchise record in 2021-22 for points by a defenseman with 78 in 55 games played, earning WHL Defenseman of the Year and U.S. Division First-Team All-Star honors in the process.

Hofer, a 20-year-old Winnipeg, MB native, was selected 181st-overall in the 2022 NHL Draft by the Washington Capitals. He returns to the Silvertips having gotten his first taste of NHL Preseason action on Sep. 25. Hofer was awarded Most Improved Player by the Silvertips’ coaching staff in 2021-22, boasting 25 goals with 33 assists in 67 games played.

Hemmerling, an 18-year-old Sherwood Park, AB native, was selected 177th-overall in the 2022 NHL Draft by the Vegas Golden Knights. Having attended Golden Knights Rookie and Training Camp this summer, Hemmerling looks to build off a successful 2021-22 season in which he netted 10 goals with 37 assists in 57 games played.

Roest, an 18-year-old Coldstream, BC native, was a key piece at all strengths for the Silvertips last season. He flashed his versatility at both the center and the wing position, collecting 13 goals with 19 assists in 59 games played. Roest attended Colorado Avalanche Development Camp in July and Rookie Camp in September.